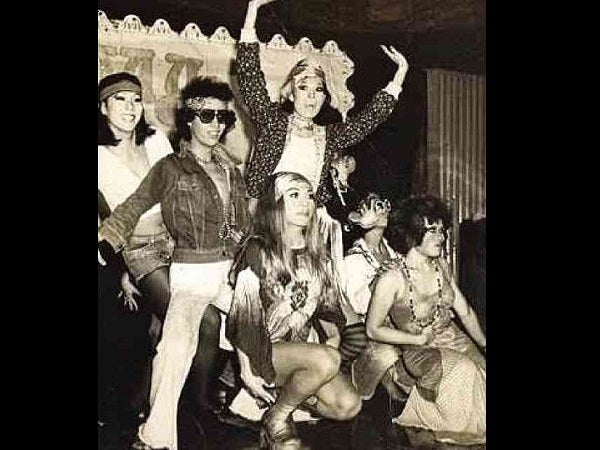 Those crazy Coco B. nights

I remember very well that it was June 1977 that fashion designer Ernest Santiago jolted Manila with the opening of Coco Banana, a disco club in the heart of the Malate district where many bohemians converged.

Here’s a recollection of the legendary landmark we will forever remember.

Address: “The world knows where we are.”

Wearing a white muscle shirt over tight blue jeans and cowboy boots, the eternally suntanned Ernest would be by the entrance. Puffing away on his Marlboro red, he would greet you with either a big smile, a warm hug, an arched brow—or a cold shoulder.

This was his way of screening guests who wanted to experience the world of Coco Banana. (If one was not lucky, he “politely” told the guest the place was full or was a private club.)

The music was to die for. From 1977 to 1986, arts and antiques connoisseur Poppop Cesar Villanueva would bring home from his New York trips two to three boxes of the latest disco music, straight from Studio 54. And every single body inside Coco B. danced the night away.

The only one who could do justice to all these vinyl records was Ariel Datoc, the best disc jockey of Coco B. He knew how to keep you on the dance floor by mixing the right moods and tempo that the crowd wanted at that given moment.

And those neon, strobe and laser lights simply jolted your senses. Or it could have been a magic potion or pill!

Two unforgettable songs I recall are Gloria Gaynor’s “I Will Survive” and “Come with Me” by France Jolie, both in extended disco mixes.

Other favorites included Donna Summer’s “Love to Love You Baby,” “Native New Yorker” by Odyssey; “I Love the Night Life” by Alicia Bridges; and many, many more hits.

Jun Jun Cambe’s whistle made the song “I Found Love” even more danceable!

In Ernest’s own fashion of bringing very original and one-of-a-kind entertainment fare, he would close the place for around two months almost every year and leave Manila’s discophiles guessing what the next brand of interior details would be. He took this route so that the place did not turn into “boredom-land.”

Come opening night, Ernest would weave in a theme, and guests were strictly advised to follow the dress code of the party.

We will never forget “All White,” “Hollywood,” “Baubles, Bangles and Beads” and the “Costume Ball.”

We can still vividly remember fashion designer Chito Vijandre’s winningest costume as the fabulous golden lion from “The Wiz” and Lito Perez dressed as Santo Niño.

Prolific writer and advertising guru Bobby Caballero whipped up the most creative invitations.

And speaking of invitations, weeks before the opening date, Manila’s craziest would check up on each other if they had or hadn’t received the sought-after invitation, because they printed only 500 of them. Indeed, it was a privilege to receive one.

It was also in these invitations that the line “the world knows where we are” became Coco Banana’s address. Wasn’t it chic?

Ernest also produced and starred in “The Rocky Horror Show,” the longest running musical that ever ran at Coco B.

We were also extremely delighted with his concept shows which featured the Paper Dolls, a group of very talented female impersonators who toured Europe for many years.

Since all of us worked from Monday to Friday, a Saturday night-out was the best treat. And in those years when Coco B. was “the” party place, the gang would usually take after-dinner naps. Shortly before midnight, we would all be ready, wearing our best bib and tucker.

We loved to ride in one or two cars, even if we all had to squeeze in, because during the ride, jokes usually permeated the conversation. Before we headed towards Malate, we would drop by Las Concha’s or Jalisco Bar along Makati Avenue near the International School for its fabulous margarita.

Or, we would have a bottle or two of ice-cold Red Horse beer at the original Penguin Café along Adriatico Street.

However, there would also be weekdays we would end up dancing the night away at Coco B. And even when the monsoon rains were falling or a typhoon was hovering over the metropolis, nothing could stop Coco habitués from having fun.

During the Coco B. days, these were the trends:

After all the fun and frolic, the tired and aching feet, the nicotine fixes and alcohol binges, the gang would usually have breakfast at Larry Cruz’s Café Adriatico, The Aristocrat on Roxas Boulevard, or the lobby of The Peninsula Manila.

When Coco Banana finally closed in the early ’90s, Ernest would still invite our gang over for impromptu dinners at his residence on Peñafrancia Street, Paco, Manila.

Whenever he would have a project to launch, he would send me all the details so I could whip up a PR communications campaign.

At certain times of the year, we would visit his rest house in Pagsanjan, Laguna, or spend a weekend in his Batangas rest house on top of a hill.

We were even planning to organize a very exclusive press tour to his fabulous resort in Lucban, Quezon, but it never materialized.

It was also in Coco B. that a lot of my friendships were developed and nurtured all these years.

Today, whenever I would have to extend my network for various projects, these “friends” would always be there to support me in their own fields of creative expertise, without fail. You know who you are, my dearest friends. Even if we were crazy during those younger years, our creative energies will never cease.

And this will remain the legacy of Ernest Santiago, who has gone ahead of us, but remains an artist and a legend.