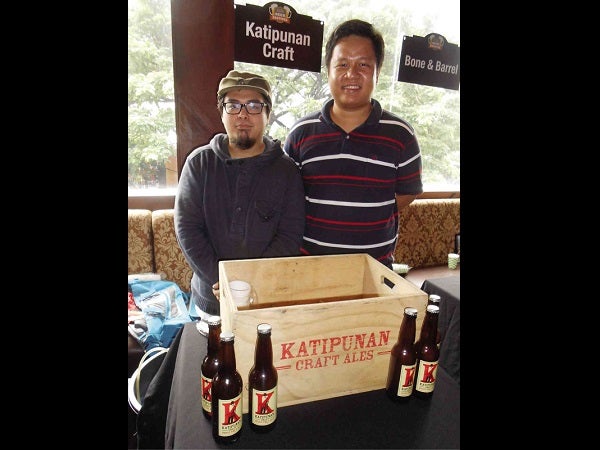 Finally after four years of waiting since their 2010 “Day and Age” concert tour in Manila was cancelled, The Killers performed in a jam-packed Smart Araneta Coliseum for two hours on Thursday night, September 26. On tour to promote their latest album “Battle Born,” the band did about 20 songs and the Filipino audience were left asking for more. Video by Ryan Leagogo/INQUIRER.net

It was too early to indulge in the foamy brew at 3 p.m., but that was the whole point of attending the media launch of the Megaworld Lifestyle Malls Beer Festival last Thursday at Publiko in Eastwood, Quezon City.

Publiko, a “gastropub” (meaning a bar and restaurant that serves high-end beer and food) co-owned by chef Carlo Miguel, had rows upon rows of some of the 150 imported, local and craft beer to be showcased in the festival that kicked off Sept. 27 and runs till Oct. 25.

We savored the perky sweetness of the caramel-flavored beer being served at the stall of Rue Bourbon, one of the participating bar-restaurants at the fest. The server handed us another cup, this time with roasted hazelnut, and it was so tasty that we asked for another one.

Walking over to the stall of Katipunan Craft, the group of brewers run by Kiyoharu Miura and Miguel Buling, we learned that there is a growing demand for craft beer—meaning beer made by small, independent breweries—in Manila. The beer brewed by Katipunan Craft has no additives, Miura told us. It consists of the four main ingredients of beer: malt, hops, yeast and water.

Always remembering scientific claims that beer is liquid food that promotes health when taken moderately, we gladly obliged to try Bavaria, a brand brewed in Holland, which tasted like Heineken.

At sunset we walked over to Rue Bourbon in the Eastwood complex to engage in more beer talk with Megaworld’s Rommel Orbigo and Rue Bourbon’s Pearl Perlada while imagining what new flavor of the brew awaited us. Instead, we were persuaded to sample “Gunpowder” and “Flaming Lamborghini”—special concoctions made of rum and vodka, respectively, with cinnamon and which the staff lit up with fire as we took sips through a straw.

It was a nice way to feel warm as the rain started falling and other guests at Rue Bourbon began drinking their beers—by the liter!

At past 7 p.m. the Smart Araneta Coliseum was abuzz with the energy of Manila’s hip rocker crowd lining up at The Killers concert. While ordering San Miguel Pale Pilsen at Sachi-Rasa restaurant, we spotted Jorge and Stella Araneta having dinner. Stella proudly waved her Killers production pass as we took a snapshot of the couple.

If the Aranetas carefully observed what transpired at the concert, they would’ve noticed that there is quite a big audience for the type of music played by The Killers—nothing earthshaking, but simply good rock and roll filled with honest, personal reflections of life and relationships enhanced by a sense of irony and ambivalence in the lyrics: “It started out with a kiss/how did it end up like this”; “Smile like you mean it”; “Are we human or are we dancer? ”

What made it special to the cheering throng was the spirited performance of Brandon Flowers (lead vocals, keyboards); Dave Keuning (guitar); Mark Stoermer (bass); and Ronnie Vannucci Jr. (drums).

These are the type of gigs that Renen de Guia of Ovation Productions should be bringing more often.

At past 10 p.m. we were on our way to Cowboy Grill on Quezon Avenue to catch the last date of South Border’s 20th anniversary bar tour.

Cowboy Grill is the present incarnation of the beer pub-with-a-live band concept that defined most of the Shakey’s “pizza parlor” branches in the 1970s. Both have the same owners, and this Cowboy Grill branch on Quezon Avenue is big enough to accommodate more than 1,000 customers.

The place was packed, filled with fans and long-time friends of South Border, and what made the gig special was that three former vocalists—Luke Mejares, Duncan Ramos and Vince Alaras—would share the stage with bandleader and co-founder Jay Durias.

It was a wonderful surprise to hear the band cover Bruno Mars’ latest hit, the disco tune “Treasure”—which drove some of the women in the audience to dance like it was the ’70s all over again.