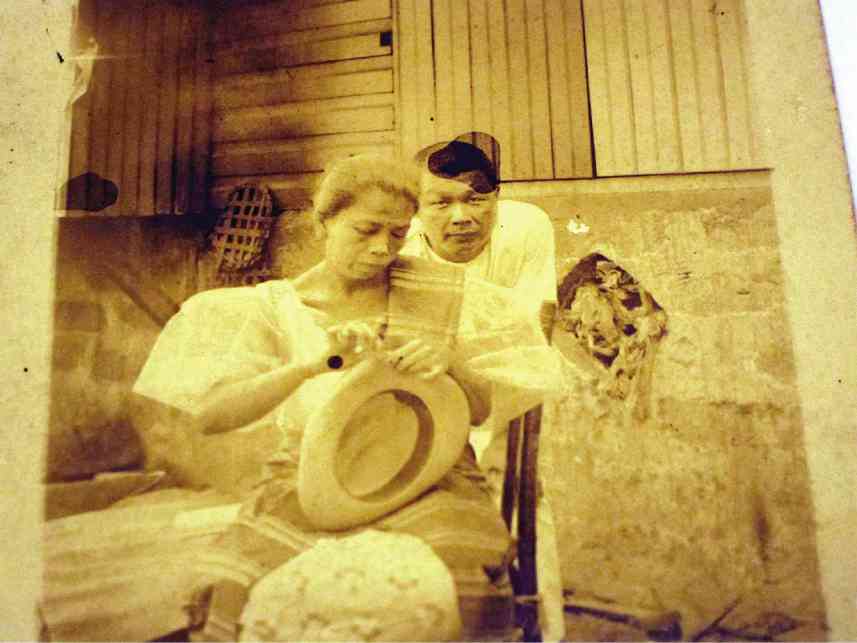 Mystery of a Jorge Pineda painting –or paintings

Heirs of Jorge Pineda are contesting the auction by León Gallery of the artist’s “Las Buyeras” (Betel-Nut Vendors), winner of the bronze medal in the 1904 St. Louis Exposition in the United States.

“We’re not selling our grandfather’s award-winning painting, so I don’t know where the gallery got the piece they plan to auction off,” said Georgina “Girna” Pineda, one of the five grandchildren of the late artist and cartoonist.

León Gallery owner Jaime Ponce de León said that the Pineda work in its auction came from the late National Artist for Literature and former Education Secretary Alejandro A. Roces.

After learning that the Pineda clan was contesting the work up for auction, Ponce de León issued a disclaimer to alert interested bidders of the claim of the heirs.

“The gallery and the consignor both maintain that the piece for auction is an authentic work of Jorge Pineda,” Ponce de León said in his disclaimer. “As to whether this piece is the award-winning piece, we believe that the reputation of the piece is a strong argument, but most of all the quality of the workmanship of the painting, and the exquisite nature of this piece, speaks volumes for itself.” 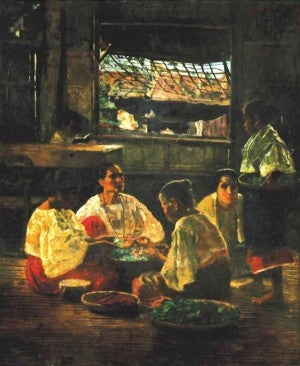 According to Girna, her grandfather, whose full name is Jorge Pineda Sr., married Lucia Fernandez. The couple had three sons: Jorge Jr., Isagani and Araw.

The eldest did not marry or sire any children; Isagani has two sons, José and Jorge III; and Araw and his wife Josefina Mendoza have Girna, Lourdes and Agustin.

As big as window

Girna had found out from a friend that the painting, which won the bronze medal at the St. Louis World’s Fair Exposition in 1904, was up for bids at León Gallery.

A press release with a picture of the painting, among other works, was published in the Sept. 16 issue of the Philippine Daily Inquirer.

“As a granddaughter of the artist, I felt we had to make it known that we were not selling either of the two original paintings,” Girna said. “That’s why I decided to call up the Inquirer to set things straight.”

Apparently the family has in its possession two versions of “Las Buyeras”: a smaller one and a much larger one. The larger one was the work entered in the international painting competition in 1904.

Asked for the dimensions of the two paintings, Girna could give only approximations with her hands. The smaller one was around “this big,” signifying a frame that could be cradled in one’s arms; while the bigger one was “as big as a window because that was the size required for entries in the painting competition at the St. Louis World’s Fair.”

(Editor’s note: Ms Pineda later sent to the Inquirer an image of “Las Buyeras” through smartphone, in which she put the dimensions at 20” x 26”; apparently this would be the smaller “Las Buyeras” in the family’s possession.)

Could there be a chance that her grandfather had made multiple versions of the painting, studies upon studies, like Picasso did in his time?

“I don’t know, but the one that won in St. Louis is with us,” she said. “After it won, the painting was sent back to my grandfather complete with the bronze medal and a certificate authenticating his win.”

A quick look at the gallery’s online catalog (leon-gallery.com/auction) lists the painting as “property from the collection of a distinguished gentleman.”

Asked by the Inquirer about his opinion, a seasoned art collector said it was possible that Pineda had made a replica of his winning work, which eventually found its way to Roces.

The collector said that he himself had seen the huge “Las Buyeras” on display in the Pineda ancestral home, in the 1980s.

De León said the Pineda heirs didn’t contact him to make their protest known. He said he had known of the protest by hearsay.

“Maybe it’s like Fernando Amorsolo and the different studies he made for ‘Sunday Morning Going to Town,’” he said, referring to the idyllic painting with its central character holding aloft her yellow umbrella.

Another Pineda painting also up for auction at León Gallery was “Chongka” (or sungka), which shows a man and a woman in traditional Filipino garb playing the shell game while seated on the bamboo-slat floor of their modest home. This one is signed and dated 1933 and measures 24” x 30 ½”. The starting bid for the piece was P240,000.

Girna said that while they had sold a few of their grandfather’s paintings, they had no plans yet of selling “Las Buyeras.”

“In our house, we’ve grouped several portraits he painted together. If we intend to sell any of them, they would probably start at around P1 million each,” she said.