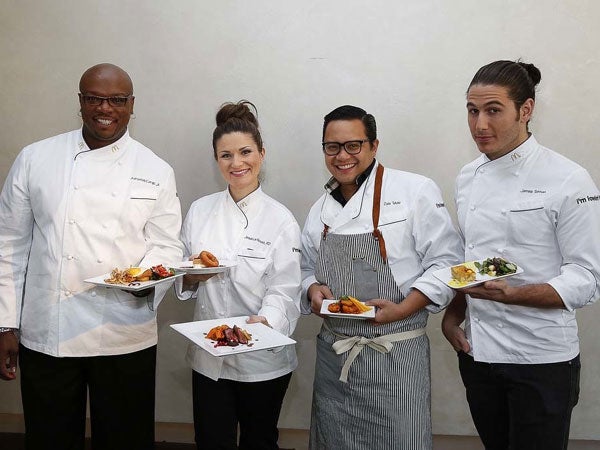 NEW YORK—You enter McDonald’s with a wait staff offering you mango pineapple mojito by a chef named Jessica Foust and you wonder if you’re in the right place. You’re led to an elegant expanse of a room that is humongous by New York standards, as it snakes around to reveal a 180-degree view of New York’s skyline. You say, not bad.

As you take in the early evening sights, the ubiquitous wait staff asks felicitously, “Would you like to try one?” Ah, hors d’ oeuvres by way of old-fashioned applewood-smoked bacon and—what do you know?—french fries, held upright by cute little miniature boxes that leave you wanting more. But you will need room for what McDonald has in store for you—an appetizer, three entrees and a dessert.

We’re talking about how five top chefs of the New York City are serving us, well, McDonald’s as they envisioned it for us last Sept. 26 in Tribeca. And there’s the warm opening remarks by Gary Watson, senior vice president of the US Menu Innovation team, who is just as good at overseeing the “menu enhancement and innovation” of 14,000 of McDonald’s restaurants as he is flying a helicopter.

It’s a night Watson is thrilled about, because McDonald’s is taking us on a “nutrition journey” for the night and beyond, as it offers healthier options and more for years to come. “If you haven’t been to a McDonald’s lately, it’s time to come back,” he said.

Watson calls in chef Dan Coudreaut, vice president of Culinary Innovation, to convince us more about how McDonald’s thinks innovatively.

For starters, would you like some kung pao chicken as appetizer? Filipino-American and former Top Chef contestant Dale Talde makes use of McDonald’s Chicken Nuggets, sweet and sour sauce, rice wine vinegar, peanuts and iceberg lettuce to give us kung pao chicken that has some pow in it—it’s spicy.

Born and raised in Chicago, Talde is now based in New York and Brooklyn where he has two restaurants. One is a Filipino restaurant called Talde and another is called Pork Slope, which is more than just Filipino.

Talde looks serious when he talks, even when he jokes around. “Chicken nuggets and kung pao sauce were an easy pair for me. It helps that I have kung pao chicken in my restaurant, but if McDonald’s wants it not just in tonight’s event, they’ll have to pay me.”

The wait staff serves food as chefs are introduced one after another with their assignments—with our wine glass flowing non-stop the whole night, leading one journalist to admit inebriation. Good thing we don’t drive in New York.

The next chef, James Tahhan, serves us the first entrée—tortilla espanola with garlic and saffron audi featuring McDonald’s hashbrowns, eggs, onions, apple and cucumber chipotle Salad. There are clearly some chipotle BBQ and honest mustard sauces in there.

Fortunately, this is only for one night. We dine for nearly three hours, aside from an hour of lively conversations and Watson’s assurance that we’d be getting healthier meals, even “side salads” for our orders at McDonald’s restaurants someday.

Watson elaborates on this by saying September was a great month for McDonald’s, when it partnered with the Clinton Foundation and the Alliance for a Healthier Generation in announcing a global commitment to help educate, empower and encourage customers to make informed, nutrition-minded choices by the year 2020.

Some of these initiatives include allowing customers to substitute a side salad, fruit or vegetable* for french fries in a Value Meal; promoting and marketing only water, milk and juice as the beverage in Happy Meals on menu boards and in-store and external advertising; utilizing Happy Meal and other packaging innovations and designs to generate excitement for fruit, vegetable, low/reduced-fat dairy or water options for kids; dedicating Happy Meal box or bag panels to communicate a fun nutrition or children’s well-being message; and ensuring 100 percent of all advertising directed to children would include a fun nutrition or children’s well-being message.

For now, it’s just amazing to experience how McDonald’s tasted differently, even for just a night, although some people speculated there must be more to the McDonald’s Chefs’ Night other than our fine dining experience. Till next year?!