‘Grease The Musical’ is back in Manila | Inquirer Lifestyle ❮ ❯ 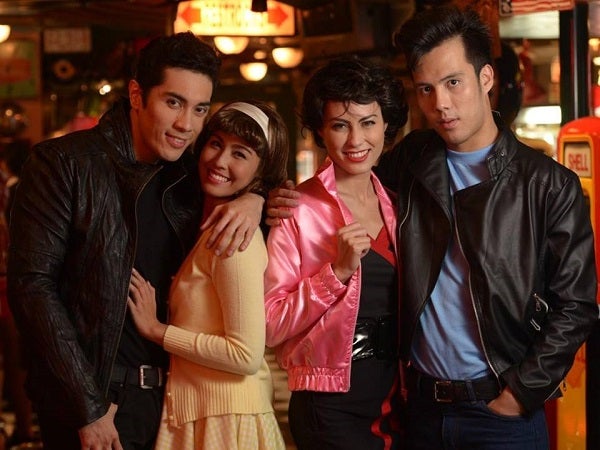 The cast of 9 Works Theatrical’s “Grease the Musical”. CONTRIBUTED PHOTO

‘Grease The Musical’ is back in Manila

MANILA, Philippines—It’s 1959! The hot-rodding T-Birds and the gum-snapping Pink Ladies, along with the rest of the students from Rydell High, are gearing up for the biggest and most explosive dance party of their lives.

When leather jackets, bobby sox, and pedal pushers were the craze, and bonfires, prom nights and make-outs at drive-in movies meant that romance and teenage hormones were swirling in the air, two teenagers from opposite sides of the bleachers try to rekindle their hot summer fling.

Head “greaser” Danny Zuko is recounting to his boys the story of those “Summer Nights” he spent with a girl at the beach when he finds out that that same girl, Sandy Dumbrowski, is actually the new girl at school. What follows is a story that inspired one of the longest running musicals on Broadway during its time, as well as a beloved gem of the American cinema, which starred John Travolta and Olivia Newton-John in the role of Danny and Sandy, respectively.

The New York Daily News has called Grease “a lively and funny musical – as well as the dancingest one in town” while critics have raved about this “sensational rock and roll romp through the ins and outs of an electrifying thing called teenage love.”

With book, music, and lyrics by Jim Jacobs and Warren Casey, this original High School Musical includes all your favorite hits like “Summer Nights,” “We Go Together,” and “Greased Lightnin’” so expect a dose of nostalgia as this beloved classic hits the stage.

After more than a decade since the musical was last performed in Manila, 9 Works Theatrical (@9WT) returns with a spankin’ new production of “Grease The Musical” to culminate its 2013 season that started with a February production of “They’re Playing Our Song”. This updated version, to be directed by seasoned actor and 9WT artistic director Robbie Guevara (@RobbieGuevara), includes songs from the hit movie such as “Hopelessly Devoted to You” and “You’re the One that I Want” that weren’t included in the original stage play.

Leading this handsome cast is TV star and stage veteran Gian Magdangal who plays the good-looking and confident leader of the T-Birds, Danny Zuko. No stranger to the 9WT stage, Gian returns after essaying the roles of Robbie Hart in “The Wedding Singer” and Roger in 9WT’s three sold-out productions of “Rent The Musical”. He was recently seen in “Katy!” and the musical production of “Noli Me Tangere”. (@gianmagdangal)

Playing the role of the cute and naïve Sandra Dee-type Sandy Dumbrowski is singer-actress Frencheska Farr who was once the winner of the hit reality TV show, “Are You The Next Big Star?”. Since then, she has appeared on the GMA variety show Sunday All Stars and in the drama-comedy series Binoy Henyo. While she is a newcomer to the stage, her critically acclaimed performance in the movie musical Emir will certainly lend its hand as she steps into shoes of the iconic role. (@frencheskafarr)

Also returning to 9WT is singer-actress and MYX VJ Iya Villania who will be playing the role of the sarcastic and outspoken leader of the Pink Ladies, Betty Rizzo. She last appeared onstage as Julia Sullivan in The Wedding Singer and is a sought-after endorser, performer and TV host for ABS-CBN’s Sunday variety show ASAP 18. Villania is excited to play a sassy girl this time around.

Alternating with Villania for the role of Betty Rizzo is fresh-faced performer Jennifer Blair–Bianco, a Fil-Am actor-singer-songwriter who has been reconnecting with her Filipino roots since moving to Manila. Her stage credits abroad include Celia in “As You Like It”, Ariel in “The Tempest”, the Baker’s Wife and the Witch in “Into the Woods” and Frizie in “Cabaret”. She was last seen as Gloria Hawkins in “Boeing Boeing!”

For “Grease”, 9WT will be launching another fresh face in Rafa Siguion-Reyna as Kenickie, the tough-looking second-in-command of the T-Birds. Schooled in voice and acting abroad, the film and TV star, and recent Cosmo Bachelor, makes his Philippine stage debut. Siguion-Reyna has been a featured performer in shows like Eat Bulaga, Party Pilipinas, and Kris TV.

Another fresh face to grace the 9WT stage is TV actress and Magic 89.9 radio host Carla Dunareanu who plays Marty, the “beauty” of the Pink Ladies.  Having starred in the hit Asian musical TV series “Kitchen Musical,” she has since moved to Manila to pursue a career in acting, most recently appearing and making waves as the aggressive flight attendant Gretchen in “Boeing Boeing!” Carla is thrilled to make her Philippine musical theater debut.

The six actors will be joined by some of the country’s finest theater performers. Making up the rest of the T-Birds are Reb Atadero as the mischievous Roger (Reb was last seen as Benjamin in “The Graduate”), Mark Tayag as Italian-American lady-killer Sonny Latierri, and RCS’ Vince Lim as the guitar-playing Doody. Rounding up the rest of the Pink Ladies are Peachy Atilano as the good-natured, “beauty school dropout” Frenchie, and Sarah Facuri as the awkward and compulsive-eating Jan.

The rest of the Rydell High population will be played by Carlos Canlas as the all-American, rockstar “greaser” Johnny Casino, James Stacey as the fast-talking DJ Vince Fontaine, Harold Cruz as the awkward class valedictorian Eugene Florcyzk, Sab Jose as the enthusiastic cheerleader Patty Simcox, Angela Padilla as the no-nonsense English teacher Miss Lynch, and Carmelle Ros as the loud-mouthed dancer from St. Bernadette, Cha-cha Digregorio.

For this production of Grease, executive producer Santi Santamaria and director Robbie Guevara have invited a few surprise guests – all notable actors of stage and screen – to fill in the role of Teen Angel who serenades the character of Frenchie during “Beauty School Dropout.” Expect a different Teen Angel every time you come see the show.

For more than 40 years, “Grease” has remained one of the world’s most popular and beloved musicals. Time Magazine even dubbed its 2007 Broadway revival as the “#1 Musical of the Year.” Now Danny, Sandy, Rizzo, Kenickie, and the Rydell gang are back, ready to bop and hand-jive at the Carlos P. Romulo Auditorium, all weekends from November 9 to December 1, 2013. Grease will have Friday, Saturday, and Sunday galas at 8pm, Saturday matinees at 330pm and Sunday matinees at 4pm.

A limited number of performances are now available for fundraising and block-buying. For tickets and other inquiries, please call 586.7105 or 0917.554.5560 or email [email protected] for inquiries. Facebook: www.facebook.com/9workstheatrical. Twitter: @9WT.

“Grease” is presented by 9 Works Theatrical, in cooperation with The Rockwell Club, Bauhaus, Greenwich as the official food sponsor, and MYX as the official music channel.