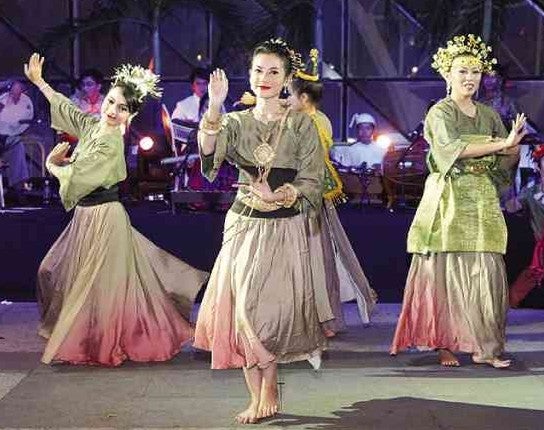 The Association of Southeast Asian Nations (Asean) gathered 40 young artists for the final edition of the Asean Youth Camp (AYC) on Aug. 26 to Sept. 1. The theme was “In Celebration, Asean Youths Unite.”

“Our youths must have a greater awareness of their interlinked destinies within this region, for they will be the future captains to steer the direction of Asean and secure its place in the world,” he said.

“We have plans, and we have initiatives to do that in different spheres— economic, security—but, beyond all these plans, I think it is people-to-people projects like this particular youth camp which will foster a stronger sense of community,” he added.

Even though Asean has held cultural exchanges, more needs to be done to a foster a deeper sense of community in the region.

“I recognize that this is not an easy process because Asean comprises a diverse grouping of countries with different languages, histories and cultural traditions,” he said. “But we also have common norms, beliefs and aspirations for our community. So, as citizens of Asean, we should celebrate our diversity, and expand the common ground we share, in order to draw closer to one another.”

Young artists took part in the workshops and presented their output through exhibitions.

Under Abdul Hamid and Retnam, musicians and dancers performed a composite of traditional music and dances of the 10 Asean countries at Plaza Singapura as part of Singapore’s Night Festival.

Meanwhile, the photography and painting delegates showcased collaborative digital collages and paintings, respectively, exhibited at the Basement Gallery of the National Museum of Singapore. The exhibit ran until Sept. 30.

Aside from the workshops, delegates toured the Asian Civilizations Museum, National Museum of Singapore, Marina Bay Sands, School of the Arts-Singapore and Kampong Glam.

AYC started in 1998, hosted by the Philippines. The program was an initiative of the Asean Committee on Culture and Information’s Sub-Committee on Culture. The final installment of the camp was organized by Singapore’s National Heritage Board along with National Arts Council and the People’s Association. Tapped were student volunteers from Raffles Institution, Republic Polytechnic and Singapore Sports School.

I participated in the AYC 2013 as the Philippine delegate for photography along with other Filipino delegates Joseph Martin Gabriel (painting), Michael Barry Que (traditional dance) and Rolinda Gilbaliga (traditional music).

Nino Kristobal Selibio from the National Commission for Culture and the Arts accompanied us as our “adult leader.”

Singapore, dubbed by a survey as the world’s most emotionless city, gave a warm welcome to the delegates. The high-spirited student volunteers were very hospitable and helpful.

The Lion City’s delegates—musician Hock Jun Shunta Goh, photographer Zen Shi Wei Teh, painter Cai Xiang Loi, dancer Kalpana Sivan and their adult leader Zaini Mohammad Tahir—showed that they were not just mere participants in the camp. They were very accommodating and thoughtful. In fact, they hosted the late-night “bonding sessions” consisting of strolls and get-togethers across the city.

Despite various conflicts in the region such as territorial disputes, environmental problems and political ideologies, young artists managed to get along well.

The delegates learned about the art regime in Malaysia, Indonesia, Thailand and Brunei.

The language barrier was a challenge. English was basically used in most of the conversations, but communication was still a challenge. Mercifully the delegates were able to relate to one another through sign language.

An unexpected highlight was when Malaysian dancer Josphine Yeong celebrated her birthday and the delegates sang birthday songs in different languages such as Filipino, Hokkien, Khmer, Bahasa Melayu and Thai.

Regardless of their different backgrounds, campers revealed that the region’s young artists are not so dissimilar after all. Brunei’s Nursyikmah Binti Haji Muamad delighted everyone with her humor while Thailand’s Songpon Saiwipas and Indonesia’s Mila Rosinta Totoatmojo initiated the fun dance during the farewell dinner.

Artistic collaborations were fostered such as the one between the photography delegates of the Philippines and Thailand (Patiparn Boontarig), who documented the AYC dance and music presentations.

True to the goals of the program, the friendship and the artistic collaborations among the delegates did not end after the seven-day camp as the delegates have continued the interaction and partnerships on creating art through social media and long-distance communication.