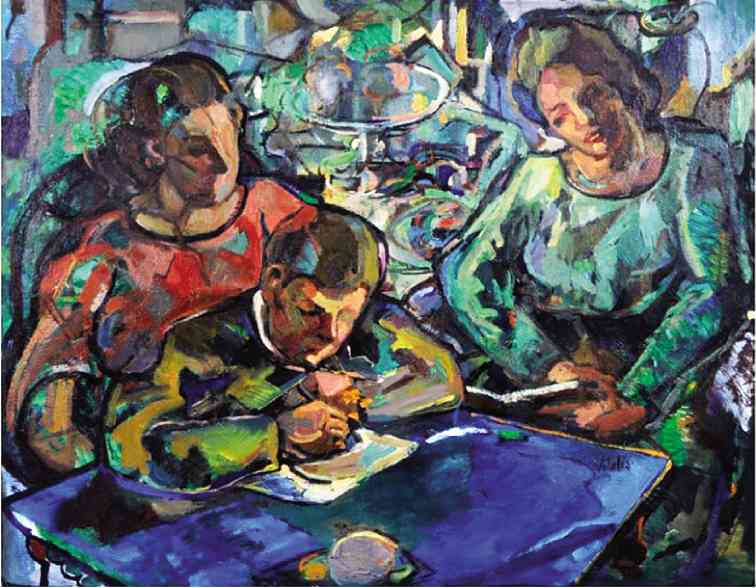 Despite last-minute questions of provenance on some pieces, León Gallery’s The Magnificent September Auction pushed through at the Asian Institute of Management (AIM) Conference Center on Sept. 28, achieving a host of firsts for the nascent local auction market scene.

Out of 154 lots, the biggest number of works to be offered for auction in the country, León Gallery sold 152 works, with a total gross of just over P100 million.

When tentatively asked to give a rough estimate of the auction’s total gross, Jaime Ponce de León of León Gallery gave the complete auction results without any qualms.

Fetching the highest bid was the piece featured on the cover of the auction catalogue—a 2007 acrylic painting titled “Barefoot Gentleman,” by National Artist Benedicto “BenCab” Cabrera. From a starting bid of P1.1 million, the work was sold for P7.7 million.

León Gallery issued a notice to bidders about the development, but maintained that the piece to be auctioned off was authentic and revealed that “the distinguished gentleman” who owned the piece was actually the late National Artist for Literature Alejandro Roces, also a former education secretary and president of Far Eastern University.

Another controversy was regarding “Heart Assemblage,” a painting originally labeled as a work of Santiago Bose. The family of the late Baguio artist had contested the authenticity of the piece so that León withdrew the piece. The opening bid was to start at P120,000.

Lilledeshan Bose, the artist’s daughter, posted on her blog on Sept. 26 that the work was, in fact, by performance artist Rene Aquitania and originally shown at Café Amapola in Baguio in the 1980s. When the building housing the café-gallery was sold, the work was apparently mistakenly labeled as a Bose, since he had worked with and influenced other Baguio artists.

“Léon Gallery regrets, though, that the image and details  included in the auction catalogue had already been printed and released before  the receipt of the formal complaint. León Gallery has already sent a letter to the Bose family informing them of the withdrawal of the piece, and maintains open communication lines with them,” said the gallery.

Although the work couldn’t be removed from the catalogue anymore, it was withdrawn from the auction preview on Sept. 23, said León.

While works of the masters had been expected to fetch notable amounts, equally impressive—if not more impressive—were the high prices fetched by works of younger artists such as Jigger Cruz and Ronald Ventura, whose paintings were sold for no less than seven digits.

A prized Hispano-Philippine crucifix made of ivory, silver and kamagong, from the collection of Ramon and Cecille Blanco-Mitra, also fetched a noteworthy P2.3 million.

Although the outcome of the auction was mostly positive, some pieces did not fare as well as the others. While one of two Justiniano Asuncion works on paper sold for P700,800 (from P450,000), the other had no takers. (The unsold Asuncion and the withdrawn Bose were the two unsold works from the 154-lot auction.)

A sizable painting by Constantino Zicarelli also paled in comparison to other works as it did not go far from its starting bid of P30,000. The piece was acquired at P35,040.

Presided over by English auctioneer Brian Hodgson, The Magnificent September Auction was light and lively all throughout. Despite the crowded venue, clients sat through the heat and tight space for a chance of going home with a sought-after piece.

A satisfied buyer who requested anonymity expressed his joy for having won the sculpture he had been eyeing since the auction’s preview that ran Sept. 23-27.

“I have loved that sculpture since I first saw it at the gallery. Leave it to León Gallery to bring a healthy mix of old master and contemporary art in one auction,” he said.

Another collector provided his insights on the auction, but did not quite share the same sentiments as those who went home happy with their purchases.

The buyer recounted how he and his wife could not finish the auction.

“I think the auction was too long. León Gallery should limit the entire event to three hours,” he said. He was quick to add, though, that he found the sales remarkable. “I am very impressed that the Vitalis sold high, along with the Hispano-Filipino cross.”

Adding to the clients’ excitement was seeing the reactions of BenCab and sculptor Ramon Orlina as their works were auctioned off.

Despite the controversies attending the auction, the bidding was brisk, even fierce, and the atmosphere was vibrant. Ultimately it was a triumph for Philippine art—and the art industry.