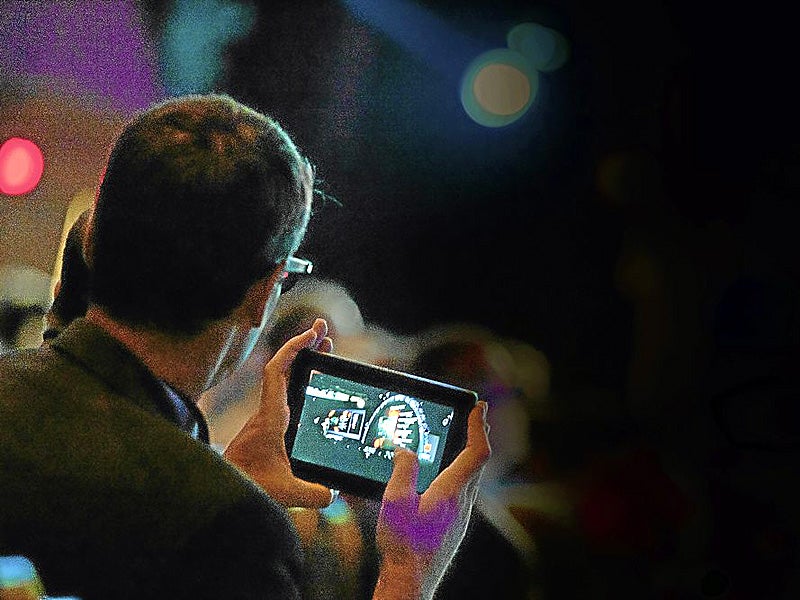 ORLANDO, FLORIDA—If this is the future—bright and hazy like a dream, lush neon lights flickering in a hypnotic dance—then sign me up.

“The presentation you’re about to see will be in 3D,” a voice, booming from the room’s speakers, said. “Please put on your glasses.”

What happened next was a scene straight out of a hyper-sci-fied imagination: The audience—over 6,000 strong and coming from all parts of the globe—collectively followed the instruction. In the next hour, as we fuzzily stared at the gigantic screens and typed away on our personal laptops, smartphones, and tablets (some simultaneously on all three), we bore witness to a show that stirred and stimulated.

(A side-note: Imagine 6,000 techies in one area, all “connected” to the web and to each other; it’s likely that the organizers had to buy every available network of wireless connectivity in Orlando just to support the absurd online activity going on.)

Alas there were no signs of blue humanoids, thank God—just a glimpse of the pervasive role technology plays in our lives and how a group of minds is trying to make sense of it all, creating everyday modern tools that are sleek, functional, and accessible to all.

This is BlackBerry World, a massive gathering designed to provide a 360-degree view of what the brand means to today’s everyday consumer, and where they’re going tomorrow.

In the span of three days, the brand demonstrated new products fresh off the labs, showcased promising collaborations with fellow industry giants, and offered insights on how one brand of wireless technology can make the world even more mobile than ever.

BlackBerry pulled no punches on the very first day of the conference and unveiled two new flagship smartphones: the BlackBerry Bold 9900 and 9930—the brand’s thinnest models yet. They also run on an improved operating system, offering users the fastest BlackBerry browser experience to date.

Microsoft CEO Steve Ballmer made a surprise appearance to announce that his company’s Bing search engine would be integrated into BlackBerry’s devices.

“They’re inspired by millions around the world who want the ultimate combination of performance, functionality, and style,” said Research in Motion President Mike Lazaridis.

Here, Super highlights five of the best features of the spanking new smartphones.

Heard from industry giants at the BlackBerry World:

“There’s a sticker plastered all over our offices in Facebook that says: ‘Social by Design.’ It simply means putting people in the center of how they interact and how they make decisions. For example, Facebook’s new photo system may not be the best, but it automatically tags people… Another bumper sticker all over the office: ‘We are 1% finished.’ We apply it to everything we do. The ‘Wall’ on every Facebook profile is 1% finished. This journey is 1% finished.” – Carolyn Everson, VP for Global Sales, Facebook

“I think that when you see the proliferation of BlackBerry in the region, you see its impact on the popular culture, as well. The BlackBerry in itself is more than a device. It’s more than an instant messaging phone. It’s a platform. You want to talk about social networking? BlackBerry is a network by itself.” – Greg Wade, Managing Director, RIM South East Asia

“We can’t live anymore in a world which is based on stuff and not ideas.” – Dean Kamen, inventor of the Segway. His words were emblazoned on posters all over the conference venue.

“The great promise of technology is that it can improve the efficiency of our learning that we can reach mastery in less time that it took those of previous generations.” – Malcolm Gladwell, writer and bestselling author

“Blazing fast, lighting fast… I’ve never been more excited for our future and where this industry is going.” – Mike Lazaridis, President and Co-CEO, RIM