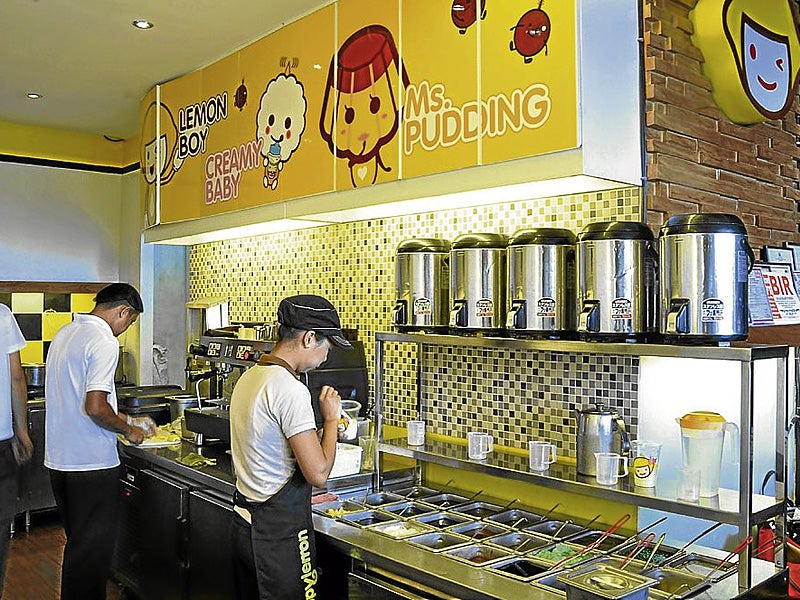 IN A CONTINENT full of tea drinkers, the coffee-guzzling Philippines is just starting to catch up with the rest of its Asian neighbors. But it’s catching up with a vengeance. In the past year, tea shops have sprouted up all over the metro, effectively cementing its place as the biggest food/beverage trend of 2011. More affordable than cold designer coffee, a glass of milk tea every mall visit won’t create too much of a dent on your summer funds.

Super went on a tea-drinking spree to find out which ones are the best.

Why we love it: Four words: Rock salt and cheese. Who would’ve ever thought of ladling a creamy dollop of cheese on tea, and sprinkling it with salt? Luckily, it works—

and we’re hooked. Since Happy Lemon first opened a few months ago, the Greenhills Promenade branch has been packed with teens and yuppies looking to get their fix in their small but cheerful store. Others also hang out to try to get a glimpse of Chris Tiu, one of the owners.

The basics: They have a solid range of milk tea (try it with sago and puff cream, or the roasted version with adzuki beans and pudding), as well as plenty of lemon and Yakult-based drinks.

The new radicals: Try the limited edition Blueberry Mousse Spin with Popping Boba (the balls feel like Fruit Gushers in your mouth), or the Italian Blood Orange Black Coffee for a refreshing take on your regular cup of Joe. And don’t forget the Rock Salt and Cheese line—our personal favorite is Cocoa.

Drop by if: You’re feeling adventurous with your teas and on your way to catch the latest summer flick.

Price range: P60 for a regular-sized tea to P100 for large milk teas and other specialty drinks.

Chatime: The next big thing

Why we love it: Probably the most authentic place for milk tea on our list, Chatime has already gained quite a following since it opened less than two months ago, despite being located at the out-of-the-way Pioneer Center. The Taiwan-based franchise is so popular, a second branch just opened at Landmark Makati, while a third branch in Katipunan is reportedly in the works. The original branch is also a great place to hang out with friends, with its spiffy white, purple and pink interiors. They have a great selection of milk teas, smoothies, mousses, and other fruit-based drinks.

The basics: The classic Chatime Roasted Milk Tea is a must-try for newcomers, with its smooth, intense flavor and generous serving of gooey pearls. But if you’re looking to try something new without being too experimental, be sure to try the Red Bean Milk Tea. The Grass Jelly Milk Tea is also highly recommended.

Price range: At P55 for a full-sized smoothie to P100 for the largest special milk teas, it’s cheaper than most.

Why we love it: Serenitea made milk tea mainstream in Manila, and we’re grateful for that. Despite the sudden mushrooming of tea shops in the city, many still visit the original for the sheer variety of milk teas—Assam, Hokkaido, Okinawa, Wintermelon, Black Dragon … the list is endless, so regular patrons can still play around with flavors to taste their subtle differences. It’s milk tea for connoisseurs. Plus, they serve food.

The basics: Start with the Assam, which is the brand’s original flavor, before moving on to the ones named after Japanese capitals. The pearls are exceptional: Cooked to the right chewiness, they don’t crush or clump together easily. Aside from pearls, you can put in egg pudding, red beans, aloe vera or panna cotta.

The new radicals: Strawberry Toffee and Wintermelon Milk Tea, plus a lot of Yakult-based drinks

Moonleaf Tea Shop: In the neighborhood

Why we love it: The homey neighborhood atmosphere where everyone seems to know your name, the collage of UP student photos and paraphernalia plastered on the walls, and of course, the milk tea. Students linger over large glasses of tea as baristas busily mix behind the small counters; it’s a heartening example of a successful grassroots business.

The basics: The Caramel Milk Tea is the bestseller, but the Hakka, Vanilla, and Wintermelon all earn raves from bloggers. The house milk tea is sweet, simple, and refreshing.

The new radicals: The small menu means everything is basic, but we’re not complaining because it’s all good.

Where to find it: 3 Maginhawa St. UP Teacher’s Village East, Diliman, Quezon City

Why we love it: They use real Matcha green tea for their concoctions. You won’t find a wide range of milk teas here, but they have a good selection of fruit-based tea drinks. You could also try their Korichios (like tea Frappuccinos, so to speak).

Where to find it: 258-B Tomas Morato Ave. Quezon City

Why we love it: This newcomer caught our eye because of its wide selection of flavors. Like Serenitea, it’s for tea connoisseurs who can taste the difference between roasted tea leaves, Oolong, and Jasmine. Some snacks are served.

The basics: Try the Premium Milk Tea; it’s richer and bolder than the regular ones, but the Royal and Roasted Milk Teas are pretty good, too.

The new radicals: Wintermelon and honeydew-flavored milk tea, as well as fruit-based teas (hence the name) such as Passionfruit, Strawberry Black Tea, and Kiwi Green, as well as Apple Berry and Honeydew Smash Ice

Where to find it: 57 Connecticut St., Northeast Greenhills, San Juan (beside Konbini)

Why we love it: Cute and comfortable, Bubble Tea is noticeably Japanese (other brands are mostly Taiwanese or Chinese). The restaurant offers more food than tea, which makes it a great hangout with friends in case you want to linger over snacks. They also have more options for your drinks, such as Splenda, additional vanilla ice cream, and combination bubbles—small and large pearls in your drink somehow make it more interesting. Best-sellers also include Takoyaki ball, Okonomiyaki pizza, Yakiniku beef rice, and Teriyaki chicken doria. Sushi and maki lovers can get their fix with their wide array of choices, too.

The new radicals: Nothing new, as all the milk tea flavors stick to the safe side. But try their milkshakes and flavored green teas.

Price range: It’s the most expensive of the lot, with prices starting at P115 for a small cup, and P125 for the large.

What we love: For half the price, Tea Delite offers bigger sizes than most milk tea cafes. It’s no-nonsense, so you are sure to get what you came for—milk tea. Most spots are simple stalls just big enough to prepare your drink. The tapioca pearls are a little smaller than the usual sizes and adds a vanilla-like syrup to the drink. It’s much sweeter than the rest and has a bit less of the tea flavor. For its price, (P45 for an XL) we’re definitely going to be coming back for more.

Drop by if: You’re on-the-go and just want some milk tea goodness to take you through the hot summer day.