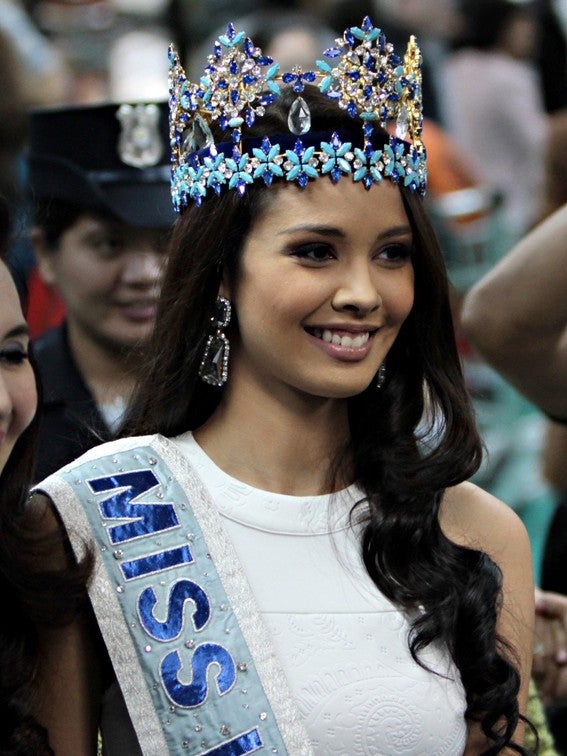 The queen has finally come home.

Ten days after capturing the elusive “blue crown,” the Philippines’ first Miss World winner, Megan Young, flew back to the country Thursday to the welcome of adoring fans.

Getting off a Cathay Pacific flight from London around 4:20 p.m., Young waved to her supporters at the airport, with the coveted crown on her head.

Young, 23, bested 126 other beauties in the Miss World pageant held in Bali, Indonesia, on Sept. 28. She later flew to London, where the pageant is based, for a series of appearances.

“I’m really happy to be home,” Young told the Inquirer. “I’m very happy to see the people … This victory is not just for me. This is a victory for the Filipinos as well.”

“It’s an amazing thing to be back here. I’m so overwhelmed by your warm welcome,” she said in her airport statement.

The actress-TV host said her international title still felt “surreal” and she was just “enjoying the moment and what’s happening right now.”

Young said she hoped to celebrate her victory by being with family members and friends, “to see them and hug them.”

Young is expected to be based in London for the duration of her one-year reign. She will visit different countries, where the Miss World Organization (MWO) regularly implements charity projects.

But Young said she would also make use of her stay in the Philippines to visit the Tuloy Street Kids Foundation in Alabang, Muntinlupa City.

“That is the foundation that has been a partner of the Miss World Philippines (MWP) for several years now,” she said, noting that the foundation had put up a home for some 900 street children.

She will also visit the Philippine General Hospital, another charity beneficiary of MWP.

Young said she was looking forward to the charity events MWO has lined up for her.

“We’re actually going to a fundraising event in New York. And then we’re going to Haiti after that. We’ll stay there for six days,” she said.

She said updates on her whereabouts and activities would be posted on the MWO website (www.missworld.com) and the organization’s social media accounts.

Wearing her crown and sash, Young was cheered by airport employees and travelers when she stepped into the arrival lobby of Ninoy Aquino International Airport Terminal 1.

As she spoke on a stage set up by airport authorities, the beauty queen paused several times to wipe her tears.

“I wish you will see that Miss World is not just about the crown. It’s about the big heart that it is showing to all the world,” she said.

Young also expressed her sympathies to her town mates in Olongapo City who were affected by floods and landslides recently, adding that she would be visiting them.

Young, who was accompanied by local Miss World promoter Cory Quirino, later proceeded to a hotel resort in Pasay City to meet the media members.

The Olongapo-based beauty convincingly snatched the Philippines’ first victory in the 63-year-old global tilt, advancing to the semifinals with the highest aggregate score in the prepageant competitions.

Young edged out France’s Marine Lorphelin for the title during the final round. Ghana’s Carranzar Naa Okailey Shooter placed third.

Young also won the “Top Model” competition, placed fourth in the “Multimedia Challenge” and was fifth in the “Beach Fashion” contest.

She was also among the select contestants featured in the “Dances of the World” segment of the coronation ceremonies.

Spotlight only on her

In the dance portion, a stylized version of the Muslim royal dance “Singkil,” the spotlight beamed only at Young.