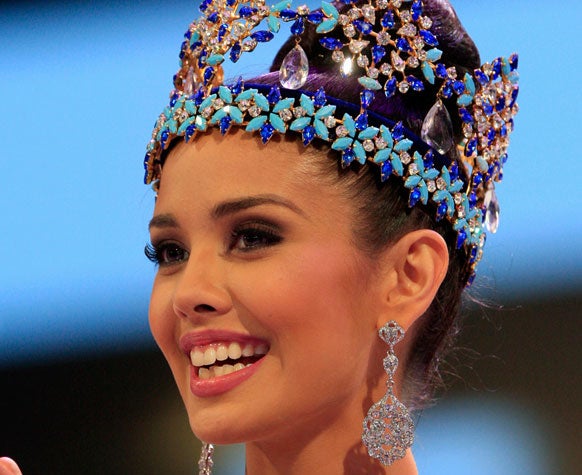 MANILA, Philippines—From the moment she stepped out of the plane Thursday afternoon until the welcome dinner ended, Miss World Megan Young was continually smiling for the people around her and the  reporters. Organizers had to beg the media men to let go of her to give her time to rest.

Young had to deal with back-to-back interviews after she arrived from London. She then graced the NBA Global game at the Mall of Asia Arena.

At the welcome dinner with sponsors, however, the beauty queen had only time for a quick dinner and catching up with family and friends from the entertainment industry.

She was then whisked away by the organizers for her much-needed rest.

Present during the party, held at Solaire Resort & Casino, were Young’s family, including sister Lauren, also a show-biz personality, who sat next to fellow actress Maxene Magalona.

On Friday, Young will make a courtesy call on President Aquino, followed by an afternoon motorcade from Makati City to the Mall of Asia in Pasay City. On Saturday she will be in her hometown, Olongapo. Sunday will be devoted to television guestings.

On Monday she will visit charity patients of the Philippine General Hospital before heading to the House of Representatives and Senate to receive a Congressional commendation for being the first Filipino Miss World.