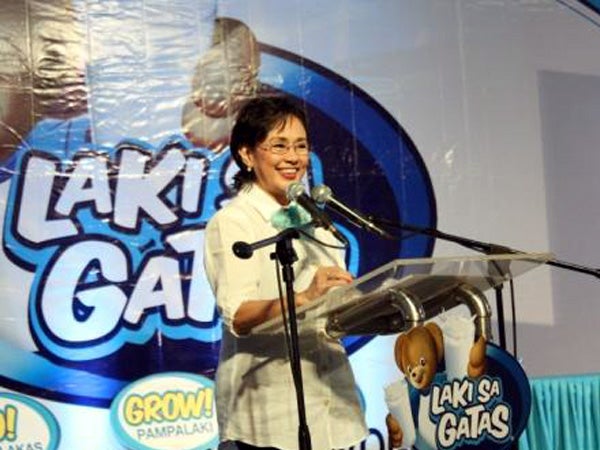 MANILA, Philippines – Moms, bring back the habit of making your children drink milk.

This was the message Batangas Governor Vilma Santos-Recto had for all mothers during a press conference Friday after visiting the latest school to be taught about proper nutrition: Bago Bantay Elementary School in Quezon City.

“Encourage your children to drink milk so that their health improves. This way, they can grow up to be productive and competitive citizens,” said Santos-Recto, an advocate of Nestle Philippines’ Laki Sa Gatas Nutrition Education.

Milagros Quinones, a district supervisor for the Department of Education said that proper nutrition was “the first step to a bright future.”

The Laki sa Gatas Nutrition Education Advocacy started in 2006 and has been reaching out to thousands of schools nationwide in its efforts to spread the habit of drinking milk. John Miller, Nestle Philippines’ CEO said that it “fills me with real joy to see children, parents and teachers embracing the advocacy.”

The former actress-turned-politician recalled how times have changed, noting that when she was still little, her mother would send her off to school with “pandesal at gatas” for snacks. “I’m not saying that children should avoid drinking juices but those are usually just water and sugar [and there isn’t] much nutrition in that. Let’s make drinking milk a habit.”

“Milk supplements the body with various nutrients that our children need in order to grow strong, healthy and smart – they need that to achieve their dreams,” said Santos-Recto. According to Nestle, milk was rich not only in calcium but also in zinc, iron, and other essential vitamins and minerals.

Miller said that children’s nutrition had an incredible impact on the nation as they were “its future.”

“Proper nutrition is key to a healthy and well-balanced life” which would mold productive citizens out of children, said Miller, adding that it was here that Nestle Philippines came in with its advocacy.

“We are dedicated to nutrition… [and] are committed for the next 15 years and beyond,” was what he said of their drive to promote the habit of drinking milk in the country.

The advocacy campaign visits thousands of schools yearly to educate people about proper nutrition and continues to add to its destinations, said Jasmin Estacio, Consumer Marketing Manager for Bear Brand. But despite the advocacy’s headway in promoting proper nutrition, many areas in the country still show high incidences of malnutrition.

Citing data from the 7th National Nutrition Survey by the Food and Nutrition Research Institute (FNRI), malnutrition was still prevalent in many areas in Bicol, Zamboanga Peninsula, MIMAROPA, and Eastern and Western Visayas.

Because of this, Nestle said that it planned to visit more provinces, indicating its move to reach Bataan, Aurora, Nueva Vizcaya, and Zamboanga within the year to “bring its brand of nutrition education to over 700,000 more students and more than 400,000 parents.”

Laki sa Gatas has reached close to 5000 public schools and roughly 2.5 million mothers and children all over the country since 2006.

Eugene David, Business Executive Manager for Nestle Philippines’ Dairy, Health and Nutrition Solution, said that the advocacy worked in two dimensions – the mothers and the children.

During simultaneous learning sessions, children and mothers are told about the importance of Go, Grow, and Glow food groups.

Mothers are also reminded to ensure that their children get the proper nutrition they need through “good food choices,” David explained. He added that they also gave “budget tips” to the mothers because “hindi dahilan ang mahirap na buhay [poverty isn’t an excuse]” to make good decisions in what to feed their families.

“We teach them to be creative in preparing and selecting food. We give them tips like one wherein they can use small plots of land to plant monggo or malunggay which are very nutritious.”

During the learning session in Bago Bantay Elementary School, Santos-Recto reminded the parents of the elementary students to ensure their children drink “not one but two glasses of milk a day.”

The Batangas governor however clarified that breastfeeding was still best for infants and that processed milk products could be given to children aged 3 years and up.

She maintained that the habit of drinking milk was so important to her that when the time came that she would become a grandmother, “I will personally see to it that [my grandchildren] drink milk.”