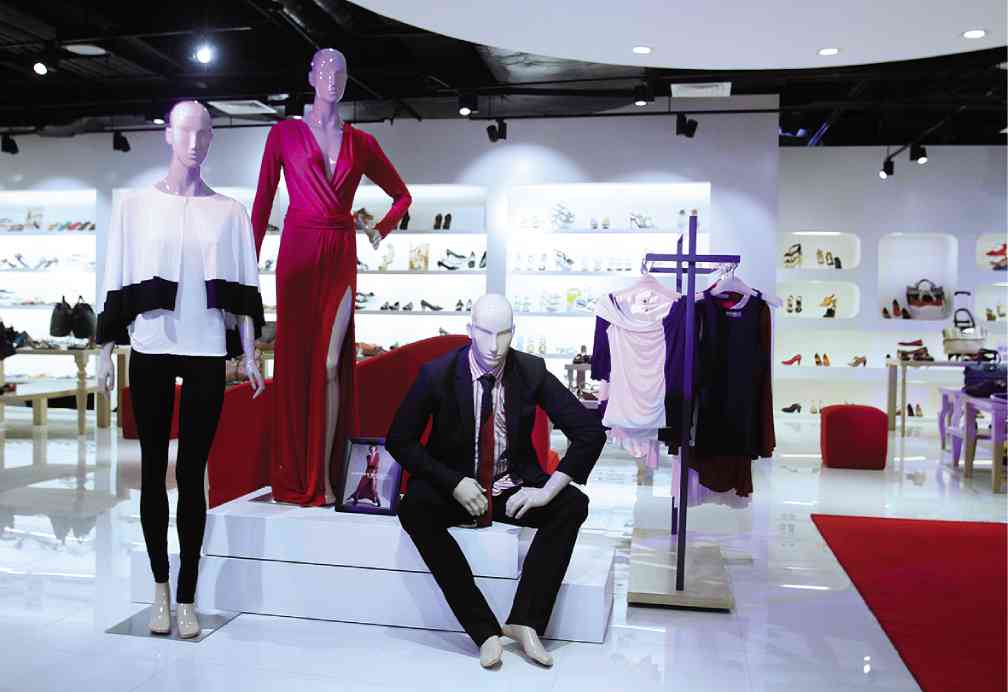 CINDERELLA’S new direction can be seen in its nearly all white and streamlined Alabang Town Center branch.

After years of complacency, and just when the local market is getting more crowded with the entry of some of the biggest global players, Cinderella has embarked on a major makeover beginning with its Alabang Town Center (ATC) branch.

Led by Arthur Coronel, CEO of Cinderella, the retail chain tapped Redgoodss Design Integrity Ltd. to work on its redevelopment. The Hong Kong-based consultancy firm is also responsible for the recent redesign of such homegrown brands as Penshoppe, Regatta and Oxygen.

At the same time, Cinderella has renewed its commitment to promote local talent by tapping designer Martin Bautista to do an exclusive women’s ready-to-wear line. For his pre-holiday collection, Bautista did figure-friendly and draped jersey separates and long dresses.

“It’s about time we reinvent Cinderella,” said Coronel, younger brother of Therese Coronel-Santos, founder of the Cinderella store chain. “We’ve reached a phase where we have to introduce changes and innovations if we are to continue to stay relevant.”

Apart from running a retail chain of multi-brand stores, Cinderella is also the exclusive representative of such foreign brands as Esprit, Mexx, British India, Naf Naf, Clarks and OshKosh

At the height of its popularity in the late ’70s and early ’80s, Cinderella was the go-to place of Manila’s young fashionable set for its exclusive mix of local and foreign clothing and shoe brands. That was decades before the advent of globalization and the entry of such foreign labels as Zara, Forever 21, Uniqlo, Gap, Banana Republic, Charles & Keith and Topshop.

Cinderella’s history dates back much earlier, when the Coronel matriarch, a dressmaker, started making baby dresses for her daughter Therese. The hobby eventually grew to become a lucrative manufacturing and retail business.

“We’ve been in business for 65 years,” said Coronel. “Not a few of our customers literally grew up with us.”

Despite Cinderella’s experience and long history, he acknowledged the urgent need for the chain to reinvent itself. But what took them so long?

“We focused more on our international brands,” he said. “But we found out that Cinderella still has a following. With this development, we hope to expand our customer base as we compete with global and local players.”

Cinderella’s new direction can be seen in its nearly all white and streamlined ATC branch, which underwent a two-month renovation. The look will be the company’s template for its future renovation projects.

“We plan to renovate our SM North Edsa and Robinson’s Place Ermita branches next,” said Coronel. “We can’t renovate in sections. Since we want to make an impact, we have to close an entire store.”

Save for occasional white dividers with perforations that form Cinderella’s new C logo, the place has a clean open setup devoid of the usual merchandise clutter evident in older stores. Unlike before, customers no longer have to navigate racks and shelves of clothes as if they were going through a maze.

Selected items are confined to the sides allowing customers to breeze through a wide central walkway that connects two main entrances. And since there’s almost nothing to obscure their view, they could immediately spot sections they want to go to.

“The work was very extensive,” said Terry Waterhouse, director of Redgoodss. “Cinderella was one of the most innovative fashion brands during its time, but, like a person, it was in seriously ill health.”

To give the place a more futuristic feel, framed upper sections of the walls called bulkheads are covered in silver wallpaper and equipped with hidden LED lights that change colors. Two huge flat-screen TVs by the counters flash editorial-quality images of the store’s latest offerings.

“By going back to basics, we created a white canvas and built a picture from there,” said Waterhouse. “There’s no rocket science involved. What we did are fundamental things.”

Having worked with numerous Filipino retail companies for 18 years, Waterhouse is familiar with the local retail scene and Filipinos’ buying habits. He’s also aware of Cinderella’s history and stature as one of the country’s leading retailers.

“We’re retail and branding consultants,” he said. “We’re not just a bunch of store planners and interior designers.”

Its rich history and reputation as an innovator are what set Cinderella apart from other brands and retailers Waterhouse dealt with.

“At its peak, it introduced reputable foreign brands while nurturing local talent,” he said. “These were Cinderella’s two core qualities I wanted to retain.”

Based on Waterhouse’s initial assessment, Cinderella’s manner of presenting its products was was so far behind the times that it looked like a “bargain-basement market.” There was a need to purge its cluttered product offerings and elevate the stores’ interiors to international standards.

Aside from the cost involved (Coronel declined to reveal the exact figure), people in Cinderella were initially reluctant to change for the simple reason that it entailed venturing into the

“People are very cautious about spending money in the Philippines. Whether it was the height of a table or the shape of a particular fixture, there was sheer resistance to change. Remember, Cinderella didn’t go through any major changes for 20 years. They were complacent. So, anything new was resisted,” he said.

Despite the initial reluctance, both parties agreed on the need to reposition Cinderella’s products as the store’s “heroes.”

“The main thing when it comes to designing a store is to help push the merchandise,” said Waterhouse. “The designer should make it intuitive for the customer to allow her to find her way inside the store.”

Before he went about reinventing Cinderella’s “brand identity and culture,” Waterhouse wanted to know the person with the “magic touch” responsible for the retail chain’s initial success. His search led him to none other than Therese Coronel-Santos, who was already enjoying her retirement.

In essence, Waterhouse wanted to distill the DNA that led to Cinderella’s success more than three decades ago and update and retrofit it to today’s conditions and standards.

“They brought her in, and I told her, Therese, if you don’t come back to work, this thing is over,” he said. “That was where the journey started.”