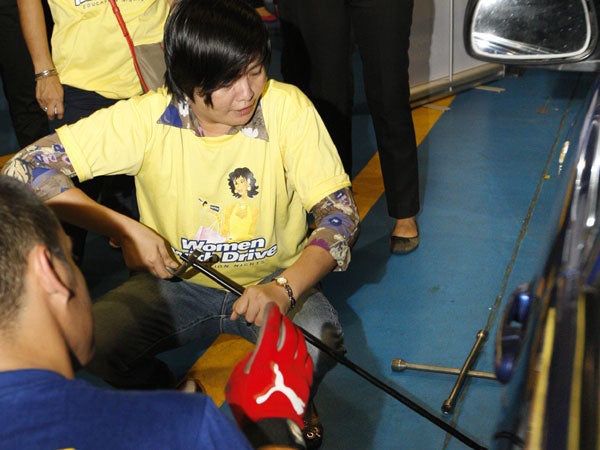 MANILA, Philippines — Ever saw someone having trouble parking and immediately assumed the driver was female? How about assuming the same about slow drivers?

These are classic cases of stereotypes about women drivers, said Goodyear Philippines President Ron Castro during a recent workshop in Alabang.

Goodyear rounded up a couple of dozen women drivers, mostly professionals and office workers, recently to teach them car maintenance and safety as part of a corporate social responsibility program dubbed “Women with Drive.”

Castro said the program started in 2007, first in Australia and immediately launched in other countries including the Philippines, in a bid to “empower female customers with enough knowledge so they will not be ‘stereotyped.’”

During the two-hour workshop facilitated by instructors from the Tuason Racing School, participants were lectured on a vehicle’s different parts – from the intricacies of its engine to the details on its tires.

A comprehensive presentation showed how a car’s brakes, shock absorber and engine worked. The event’s highlight, however, was when the participants were given hands-on exercises on how to change tires and troubleshoot various car problems.

Many of the participants found the workshop insightful, learning more than what their years of driving afforded them.

Melanie Macuja, 47, has been driving for 18 years but said it was the first time that she learned of the functions of some of the car parts.

“I’ve been driving for 18 years but it is my husband who is maintaining the car. For the basic thing like changing tires, I hope I can do it now,” she said.

In the middle of the workshop, the instructors showed the different fluids or oils used in a vehicle, teaching the participants their uses, attributed problems and how to differentiate one from another.

Another participant, 29-year old Katryn Cayco, said the lecture not only taught them how to troubleshoot car problems but also to understand the reasons behind it.

“My father and friends (who help maintain my car) just tell me what to do. I follow them but this is the first time (in my six years of experience as a driver) that I learned the reasons behind such things,” she said.

But Cayco said the lessons on safety were the most helpful, especially after what happened to advertising executive Kae Davantes who was driving alone when she was abducted by her murderers.

“Safety of women is an issue nowadays…Their tips on safety are my favorite (part of the lecture). Important tips such as when you leave a grocery store you should be aware of your surroundings and not to ask the help of strangers; ask the help of the security guard,” she said.

Some of the safety rules given were basic – such as locking the doors and not picking up hitchhikers.

“We (Filipinos) have been driving for a long time. And yet there is one thing missing –

the knowledge about basic car maintenance, basic tire maintenance and safety…especially after what happened to that advertising executive from Makati,” Castro told the audience.

The Goodyear Philippines president said safety rules have long been included in “Women with Drive.” During their workshop in Pampanga, a dozen female police officers were invited to conduct the safety training.

“Law enforcement goes hand in hand with the safety. Unfortunately, it had to take that incident (murder of Davantes) to remember that we should be doing it,” Castro said.

“Sometimes you can’t really avoid [such incidents]. And sometimes you can. To me, if I can use this as a vehicle to communicate to women drivers, to take extra caution, I would be successful,” he said.

For the workshop instructors, the stereotype imposed on women drivers is just a stereotype without basis.

Tee pointed out how enthusiastic the women drivers were during the lecture and practical exercises.

“There were tons of questions. For them it’s easy to absorb the information. Just try to explain it so they can (easily) understand, instead of using a lot of jargon,” he said.

Tee, who has been with the racing school for 15 years, said the trick is to “simplify, demystify” the functions of a vehicle to help women learn faster.

“It’s a man thing,” he said of the negative perceptions against women.

“They are actually safer drivers.”

During the lecture, the instructor cited statistics that men have a 77 percent chance of dying in a car crash as compared to women. It was a similar argument used by the Metropolitan Manila Development Authority when they proposed to have more women bus drivers on the road.

But the workshop also revealed that many women drivers lack training that would allow them to deal with preventive maintenance and the simple act of changing a tire on their own.

Macuja said many women were probably clueless about maintaining a car because they were not trained and have become dependent on their partners or mechanics.

Cayco added there was a need to hold such workshops for new drivers to teach them how to deal with car problems – through actual exercises and not just in theory.

Castro told participants that the workshop should result in two things: for the women drivers to become more confident and return to the Goodyear store in Alabang.

“This is the only store in this area that will teach you, that will hopefully earn your trust,” he said.

In an interview, Castro said their company thrives on trust.

He said as they develop the quality of their products, they also work on teaching their clients to take care of their tires, especially since tire problems are among the major causes of vehicular accidents.

“Hopefully with our ‘Women with Drive’ workshops, we now create a community of women drivers who will someday become loyal and will say ‘(I need to) go back to that store. They invested time and money for me to learn. I will trust them,’” Castro said.