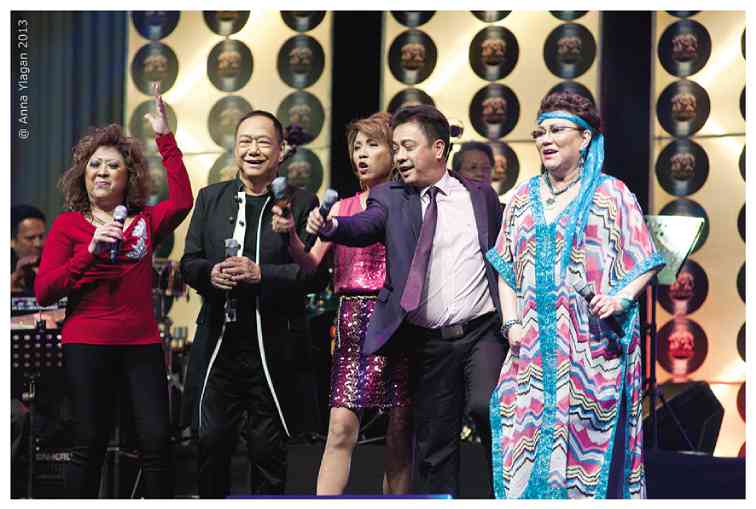 From the footwear of the crowd whose queue ended beyond the iron-grille gate of the PICC, then traversing past the walkway connecting the entrance lobby to the performance hall, one could discern that this audience was of a benevolent age.

There were no five-inch heels with three-inch platforms, just sensible shoes, the highest sighted being 2½-inch wedges from a foot-friendly brand like Aerosoles.

To this crowd, silver platform shoes and the like were a thing of the past, for in their heyday, they burned the dance floors at places like Wells Fargo, The Flame, Nile, and Coco Banana to the music of raucous bands. Theirs was a dancing era.

So, when news spread that members of two of the greatest show bands of that time, the Circus Band and the New Minstrels, were in for a grand reunion, the discophiles and mature “groovies” came in droves.

When finally the audience was mostly assembled a full hour after the scheduled curtain time, technicians came on stage for a final check, followed by the musicians led by music director Rudy Lozano of the Circus Band.

A discernible hubbub arose as 11 silhouettes appeared, and when the spotlights came on and strains of the opening number were heard, the muttering burst into shrieks as each figure advanced to be recognized.

Henceforth, everyone sang and danced along to the succeeding songs.

The duets elicited wild screams: Eugene and Louie’s award-winning “Nothing I Want More” panned out like a second skin to both singers, that the muscle memory of Johnny Manahan’s blocking from decades ago came on naturally.

Ray-An and Tillie’s “Umagang Kayganda,” though not awarded at the time of competition, may as well have been, judging from the crowd’s enthusiastic reception.

Vocal prowess was clearly the highlight of this show, with each voice distinguishable.

Clearly the hit-makers were Basil and Hajji, in that order.

All that Basil—perhaps the quietest of the lot—needed to do was to stand there and open his mouth. To this day, there is not one male singer who has matched Basil’s velvety bass, never mind that his voice has gone down a pitch lower with maturity.

His heart-wrenching renditions of Canseco ballads still remain his trademark. Sadly, these were left unheard in this trip down memory lane, with the exception of “You,” dedicated to the late composer and fellow Circus Band member Gerry Paraiso.

Basil sang the song with Pat,  and it brought a somber note to the frenzy, especially when Pat’s voice cracked slightly with emotion as a tear was detected in her voice.

Jacqui and Louie were at their scatting finest, with Louie hitting the highs and Jacqui the curly low arpeggios.

Jacqui, in her signature flowing robe, isolated head moves and graceful hands, was in her usual laid-back but playful mood.

Ding’s baritone and “Ann- Margret” dance moves did not betray his maturity as his voice was in full reverberation.

What we missed were Ray-An’s intricate moves he was so well-known for in the weekly dance show “Penthouse Seven.” But, like all the rest, his pipes were all in place, using it, as he explained in private, “to sing for the Lord.”

In his newfound passion, Ray-An has become a powerful and convincing preacher and music-ministry head in Canada.

The years have been very kind to the youngest female, Joey. It seems her voice has thickened with the years and her range has a deeper, well-rounded quality.

Perhaps, too, the songs assigned to her afforded her to exert above her signature “good-girl bebop” songs, which made her one of the more popular concert artists of her generation.

Chad, a throat-cancer survivor, did not lag behind. For one who was once told that he might not sing again, Chad stood up to the challenge, coming into his own.

Tillie’s distinct female-rocker voice, though wanting in its former soul, still had edge. Much in the genre of Janis Joplin, Lydia Pense, Bonnie Tyler and other gravel-voiced rock goddesses, Tillie sang through the odds.

Chatty and candid was the now mature Hajji, “kilabot ng kolehiyala” whose boyish charm and pleasant tenor lent the kilig factor to “Nakakapagtaka” with Joey, and his solo number “I Just Don’t Wanna be Lonely.”

Watching these seasoned artists work the stage and own the floodlights, wielding microphones as though they were extensions of their voices, underscores the fact that paying one’s dues to the art of performance is the only ticket to a long and successful career—especially in a time when instant celebrity equates with short-lived stardom, in an age when Andy Warhol’s quote, “Give me my 15 minutes” is exactly what they get.