He acts with Eula Valdes, Wilma Doesnt –and supplies their bangles, too | Lifestyle.INQ ❮ ❯ 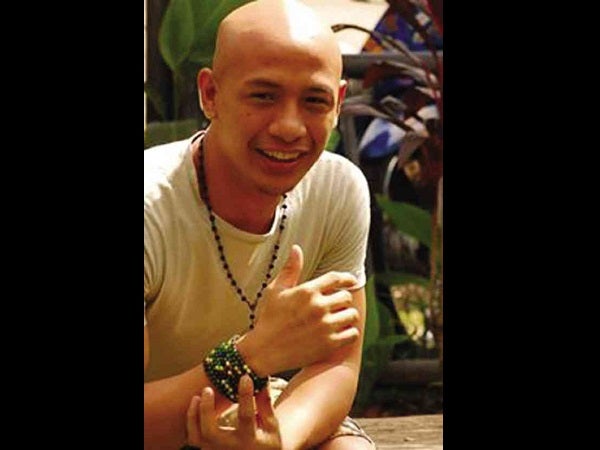 He acts with Eula Valdes, Wilma Doesnt –and supplies their bangles, too

During a break from rehearsals one day, Paolo Rodriguez found out that some women in the cast were willing to skip a meal in order to save money to buy a pair of earrings.

“I was fascinated by it,” he says. “I started selling accessories that I bought from Divisoria.”

When his clients started to place orders with specific materials and sizes that Rodriguez couldn’t find, he started making them himself. He’s been selling his designs to the theater community since.

“Eula Valdes asked me to make her a big armband. Wilma Doesnt inspired me to make big, big statement earrings,” he says.

He’s peddled necklaces, bracelets and earrings, among other pieces, to coactors in his recent productions such as Philippine Educational Theater Association’s (Peta) “’D Wonder Twins of Boac” where he played Malvolio; Resorts World Manila’s “The King and I” where he was a monk in the ensemble; and Tanghalang Pilipino’s (TP) “Tatlong Mariya” as Daniel.

Rodriguez attributes his innate ability to design and create jewelry to his environment growing up. “I spent my childhood among craftsmen. It’s second nature for me to use my hands,” he says.

Born and raised in Tacurong, Sultan Kudarat, his mother was a street vendor who sold fruits, vegetables and merienda fare; and his father worked as a carpenter.

“When I was growing up, my family couldn’t afford toys. All of my toys were made by my father. Sometimes I made my own toys using old cans or dirt,” he recalled.

Growing up smack in the middle of the market provided rich influences that captured his imagination and creativity.

He’d seen the colorful results of meticulous artistry. “I grew up seeing the wares of Maranao jewelers, tabak (swords) makers and potters. I saw the woven banig (mats) of Maguindanaoans,” he said.

He was also exposed to beauty in functional materials. “We had a neighbor who built trucks. There was an upholstery shop nearby. I would see some Manobo making rattan furniture in the neighborhood where my father, a very skilled furniture maker, used to work.”

It wasn’t just the sights, but also the sounds of a bustling market that fed his impressionable young mind. 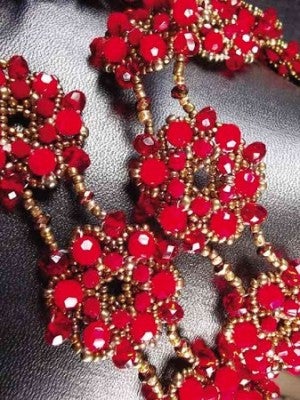 “My mother had a stall near a movie theater, so I would watch movies all the time because we didn’t have a television at home. And if I couldn’t watch, I would listen to the dialogue because they had speakers outside the theater. I know all the theme songs of different movies,” he says, laughing.

By the time he relocated to Manila for college, his love for singing made him acquiesce to his friends’ urging to join Dulaang Asilaw, the resident theater group of New Era University, where he took up Mass Communications.

The theater bug bit hard, and he ended up being the group’s president for two consecutive years.

After graduation, Rodriguez auditioned to join the Tanghalang Pilipino Actors Company, its resident pool of actors.

“Before college, the idea of becoming an actor didn’t really register in my mind, but the more I did it, the more I couldn’t imagine doing anything else. The rest is history,” he says of his career, which now spans work mostly for TP, Peta, as well as television and film. 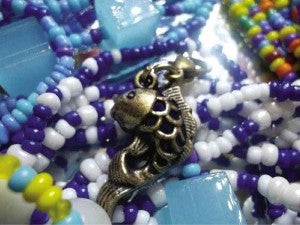 When his parents finally saw him on stage, in the titular role of TP’s “The Romance of Magno Rubio,” it was also their first time ever to watch a play.

When Rodriguez stabbed another actor, his mother, seated in the front row, shouted, “Hoy makatama ka!”

“In my next scene, I was supposed to break down, but I was trying so hard to contain my laughter. Good thing I had my back to the audience,” he recalls.

And when Rodriguez brought home an acting award during college, his father deadpanned, “My grandfather acted in the moro-moro, too.”

Aside from retailing his pieces, Rodriguez’s beadwork has also been used in Dulaang Unibersidad ng Pilipinas’ “Orosman at Zafira” as well as in TV shows such as “Indio” and “Amaya.”

“I miss doing production design. The last time I did work like that was back in college. I would design the sets and props, and go to Divisoria to buy the materials needed. The entire budget for a production would only be P5,000,” he says, laughing.

Rodriguez continues to do acting work while creating bead jewelry. He works mostly using seed beads, but can also work with semiprecious stones.

“The smaller the materials, the better. I love intricate designs,” he says.