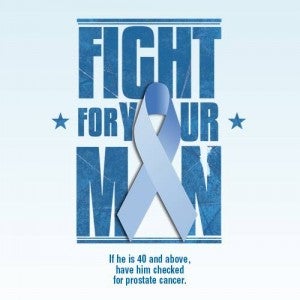 MANILA, Philippines—Women fighting for the early detection of prostate cancer?

Since men are deemed too stubborn to have themselves checked, women have been targeted to lead the fight against the third cause of death among Filipino men.

Spearheaded by Janssen Phils. and Healthway Medical Clinics, the campaign “Fight for your Man” reaches out to women to get the men in their lives who are at least 40 years old and have a family history of prostate cancer to have themselves screened for the disease.

Sonia Roco, whose husband Sen. Raul Roco died from complications of prostate cancer on Aug. 5, 2005, said she was working on an advocacy campaign for awareness of the disease because that was what her husband had wanted to do.

“More lives could be saved by early detection if the men would cooperate. They hate going to hospitals to see a doctor,” she said.

The late senator, who was diagnosed with prostate cancer in 1996, kept his condition a secret. He went into remission following treatment.

His wife attributed the recurrence of the cancer to the stress of running for president in 1998 and 2004.

“By 2004, he was beginning to feel pain all over. He was in the mountains in Mindanao in the middle of the campaign when he said the pain was getting to be unbearable. We came back and fought till the end,” she said.

Dr. Josephine Tolentino, an oncologist who heads the prostate screening campaign, said that while prostate cancer remained the most commonly diagnosed cancer among men, poverty and poor health service delivery contributed to a low level of consciousness about it.

“So we promote awareness to get them to do a regular screening. But in our culture, men are afraid of going to doctors because they don’t want to know they are sick. So we talk to the wife, sister, daughter, granddaughter. We ask them to intervene,” Tolentino said.

He said the initial symptoms, which do not show up in the early stage, are a weak and reduced urine flow, urinating more often, especially at night, and difficulty passing urine.

As the prostate cancer advances, the symptoms would include lower urinary tract problems, blood in the urine and painful urination. In the advanced stage, the patient begins to feel bone pain.

“We have to create a foundation, an advocacy group to support educating the men because right now, there’s no [advocacy group among] men,” Songco said.

“So if you have men in your lives, have them screened because in the early stages it’s really curable,” he said.