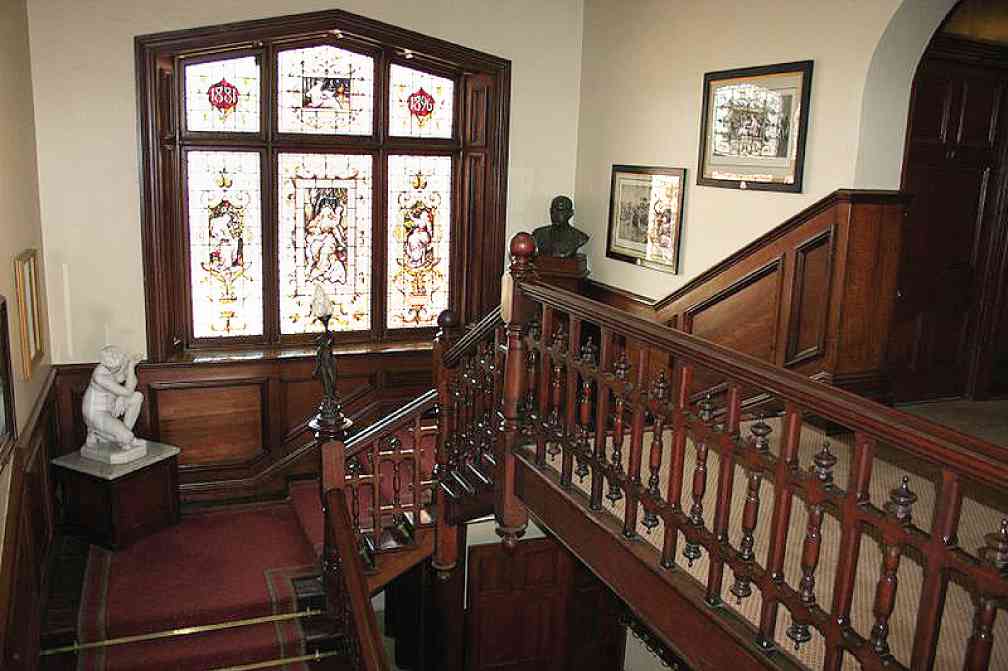 THE STAIRS leading up to the bedroom suites in Kimberley Club WIKIMEDIA.ORG

The knock was frantic. It was about 10 p.m., and I was browsing on my iPad as my roommate, Marbee, was packing her suitcase by the door in the other side of the room.

We were set to leave South Africa in the morning, and Pepper had been animatedly coming in and out of our room to show off his shopping finds. But this time the knock was harried. It was Pepper, all right, and not far behind him in the hall, I heard Malu’s voice.

“They need to know!”

We were in the historic diamond-mining town of Kimberley in South Africa’s Northern Cape, at the end of our nine-day safari and media familiarization tour. We had checked in the previous day at the Kimberley Club, a former gentlemen’s club founded by the city’s mining magnates in 1881.

Even after renovations to turn it into a modern hotel, the walls still felt like it had had seen a lot and had stories to tell.

I didn’t have a good feeling. One step onto a threshold and I know instantly if I will be able to sleep at all throughout my stay in any given hotel room.

I whispered to Marbee as we made our way to the second floor, where the bedroom suites were. I asked if, just in case, could I please, please room in with her.

She knew my fears; it was she who suggested I wrap my pillow with my red shawl, she who herself wears all red in bed—you know, to ward off otherworldly spirits. (Anything to placate an anxious heart.)

I turned the key to Room 2, the second closest to the stairwell, and, just as quickly, I ran out to call on the others. At that moment, I’d have preferred to sleep next to the lions in the wilderness. No way was I spending two nights in that room alone!

It’s all in your head, my friend kept telling me. Sure. Then, could I please leave my head elsewhere so the spooky thoughts that fill it don’t overtake my entire being for the duration of my trip?

I love to travel as much as the next person, but nothing puts a damper to any trip than coming home at day’s end to a room that feels less than restful.

I don’t claim to see things. I only know what I feel and hear. I’m usually very pragmatic, but when that eerie feeling creeps in, logic flies out the window.

In Berlin many years ago, I woke up at 2 a.m. with the sound of furniture being dragged around in the room above me. Then, the loud hum of a vacuum cleaner. Which hotel allows housekeeping to clean rooms at that ungodly hour?

Then, one time in Beijing, in the middle of the afternoon, a baby was wailing in the room next door. When I complained, I was told there was no baby in my floor.

In one hotel room in Singapore’s Orchard Road, the hairdryer suddenly turned on without me ever touching it or even coming near the drawer where it was stashed.

The worst was during a trip to Spain two years ago where I barely slept for nearly two weeks, even with sleeping aids. It was a pilgrimage tour and, from Madrid to Santiago de Compostela, we moved every night to a new hotel, the Parador chain of hotels, historic structures—centuries-old hospitals, prisons, castles—turned into modern, five-star accommodations.

Even in their plush comforts, I felt like I was never alone in the room, like someone was watching. I’d jump at the slightest noise. My usual routine of the lights and television kept on (for white noise) were no comfort. I’d sleep with the AC full blast so I could hide my head under the sheets.

In the daytime, as we drove to our next hotel, my heart would be consumed with dread. Please, please …

“Are there fantasmas (ghosts)?” I’d ask our guide jokingly, who, amusedly, would relay my query to our Spanish hosts. Invariably, they’d laugh, like I just asked if Martians lived among them.

In some of our stops, I think I’d infected everyone with my fear that two, three of us would cram ourselves in one room, leaving behind our own rooms. They would even leave out details about the hotel until we have checked out, like, say, in the courtyard, 2,000 bodies were buried by the Nazis.

Our Spanish guide Virginia later wrote to me to say that this morbid fascination for ghosts and spirits was distinctly Asian; she had Japanese tourists who, apparently, blog about their otherworldly encounters.

Maybe I’ve just seen too many scary movies, or heard too many old folks’ tales. Maybe I just like everything new, hotel rooms that haven’t seen too much, beds that haven’t been slept on by strangers who have come and gone.

Or maybe I just have a hyperactive imagination that’s hard to shut off. Maybe. But when I heard that knock on our door in Kimberley Club, I knew.

Pepper would go on to tell us that Gel had “seen” someone who was staring at her as she smoked in the balcony in the reading room, a balcony that was two doors down from—and overlooked—the room I abandoned. The figure disappeared just as quickly as she flicked her cigarette.

Marbee and I stepped out into the hall and Gel was by her doorway a few feet away, looking very shaken and distressed. She was crying.

“I’ll tell you something about your hotel when you leave,” our driver said cryptically the day before. But no one else bothered to say anything, including the fact that Kimberley has a popular ghost tour, and Kimberley Club is one of its main stops. (So there, unlike me, some people do get a kick out of otherworldly apparitions.)

According to the hotel website, one Mr. Van Praag inhabits Room 1, next to my original room, such that they never book a lone woman in that room, added our driver.

Other accounts say a ghostly waiter serves in the dining room, and a woman in period costume appears on the stairwell.

That evening, our last night in Kimberley Club, wrapped in our red scarves, Marbee and I sat on our beds and watched B movies on TV all night. Daylight couldn’t come soon enough.