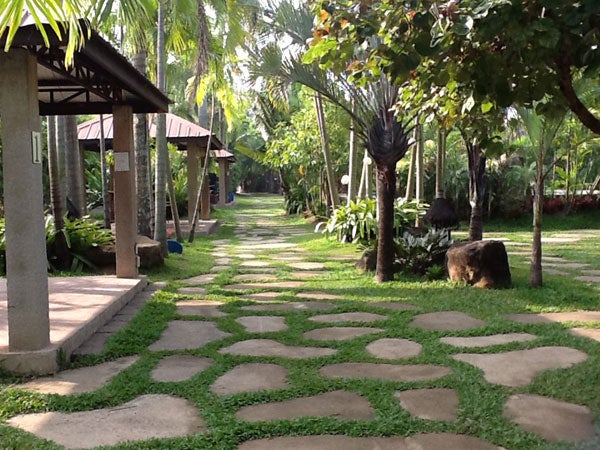 `Manicured pathway in Tropical Garden provides a sense of peace and serenity.'

A green haven rises from a barren field

In today’s pace of living and working, it’s natural for anyone to dream of ways to rest and recharge a weary body and mind. For some people, it can simply be a good massage in a spa, for others a trip abroad, and for many more, it can be spending a day or two just sleeping, eating, watching TV or movies at home. Me? I usually drive off to a green hideaway in Talavera, Nueva Ecija province.

Some friends then, and even up to now, wondered why Nueva Ecija. The province is known more as a rice-producing area, not for relaxation. While there may be several leisure spots and recreation facilities there, they’re not really that popular. Well, maybe to local residents, but not to city dwellers who want their money’s worth and their adventurous spirit satisfied.

If it’s proximity you’re after (going to Talavera takes about 2 ½ to 3 hours from Manila, even via  SCTEx), there are nearer places you can go to. Tagaytay is one, and countless other places in the heart of Rizal
and Laguna provinces in the south. I’d been to some of them and would love to visit these places again, probably for the same reason I’d drive off to Talavera.  But if there’s a choice, I’d always pick the latter.

Why? It’s because of a place called Tropical Garden Resort & Hotel. Built on what used to be a barren field with patches of thick wild grass and some fruit trees in Barangay San Pascual, the resort has now become a go-to place for those who seek respite from the daily grind. It’s more the green things really—trees, plants and flowers—that refresh the tired mind and body. Being there is basically communing with nature. It has pools to provide frolic and fun to kids and adults, but even these amenities are
dotted with flora.

The people who transformed this wild patch into a green haven belong to a family of green thumbs. Lorenzo Inos and his wife Lina used to deal with various businesses, but chose to grow plants on the side when they realized it could earn them as much as selling palay. Their three children are into the business too. John, the eldest, runs a plant shop in Cabanatuan City, while Daisy oversees the culinary needs of guests. The youngest, Lorenz, finished a business course, but found his calling in landscaping and is credited with designing and developing the resort.  Encouraged by his father (who died in 2010), Lorenz
took on garden landscaping and did projects in Nueva Ecija as well as in nearby provinces and even in Metro Manila. He has even made their family’s home in Talavera a showcase to his landscaping artistry.

He still takes on projects, but his main focus now is in maintaining the fresh and green look of Tropical Garden. That’s not an easy job. The place has grown into almost a two-hectare complex with four swimming pools—two for adults and two for kids–cottages, and lodging rooms for guests who want to stay overnight or longer.

Events place
Today, Tropical Garden does not only provide a recreational area to soothe tired minds and bodies but a beautiful venue for various special occasions. People choose the place to hold weddings, banquets, parties, even local beauty pageants (the 2011 Search for Miss Talavera was held there) simply because
of its nature’s touch and green ambience. It is simply cool. Tropical Garden is usually fully booked between December and February for weddings due to the cool weather especially at nights. Dotted with special lights, the place erupts into a wonderland when dusk falls.

Landscaping could benefit any space regardless of size

A garden-but what a garden it is!