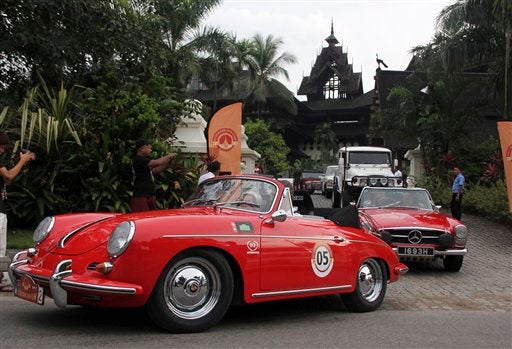 YANGON — A group of classic car enthusiasts on Monday embarked on a road trip around Myanmar — an event organizers hope will help save the country’s ageing automobiles from the scrapheap.

Twenty cars including marques such as Mercedes-Benz, Rolls-Royce and Chevrolet left Yangon on a two-week, 1,429 kilometer (889 mile) trip that will take them to Inle Lake, the ancient temple city of Bagan and Ngapali Beach.

Nine of the vehicles are owned by foreigners and shipped over specially for the event, which follows dramatic changes in the former pariah state since junta rule ended in 2011.

“I have watched what the country has achieved over the last 30 months and it’s astonishing,” said Richard, the British driver of a 1956 Mercedes-Benz.

But as the country opens up following decades of isolation, many have been sent to the junkyard.

“It’s very sad to lose these old cars,” said Zaw Phyo Linn of the Myanmar Classic Cars Club who is participating in the road tour.

“Our intention to hold the event is to let people know that these cars are valued and encourage them not to destroy them.”

Under military rule, imported cars were a luxury reserved for people close to the junta.

But the country’s new reformist government has allowed owners of ageing cars to trade them in for hard-to-get permits to purchase imported used vehicles.