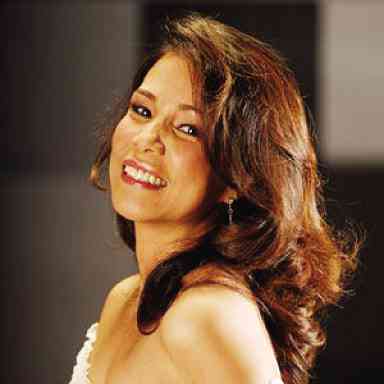 Irma Adlawan–how she went from ‘sandwich queen’ to Drama Queen

The actress Irma Adlawan, who hails from Cavite, was born in Tondo, Manila, in 19-forgotten to a retired colonel of the Philippine Air Force, Pedro Adlawan, and Conrada Santonil, housewife. She attended St. Mary Magdalene School in Kawit, Cavite, then Maryknoll College, UP Manila, and finally took up Speech and Drama at UP Diliman, completing the course save for her thesis.

In the Dulaang UP of young Irma’s time, actress Shamaine Centenera was already a name to reckon with. Soon she, too, became a favorite of Dulaang UP founder, director Tony Mabesa.

“He was the main reason I got into the theater,” Adlawan recalls. “He asked me to audition for his production of ‘A Midsummer Night’s Dream.’ And everything else is history.”

Mention of Mabesa makes the actress nostalgic: “I go back to my youth, remembering how things started. I was always on my toes.”

In the Theater edition of CCP’s Encyclopedia of the Arts, researcher R. Galang writes:

“Among her (Adlawan’s) best work for the different theater groups in UP are Anton Chekhov’s ‘Three Sisters’ as Irina; the translation of Ugo Betti’s ‘The Queen and the Rebels’ as Argia; ‘Rashomon’ as Kinune; and Moliere’s ‘Misanthrope’ as Celimene.”

After UP, the now A-listed actress worked professionally with Tanghalang Pilipino, the resident drama company of the CCP, from 1991 to 1998.

Again, from the Encyclopedia: “For Tanghalang Pilipino, she is best known for her performances in Jose Dalisay’s ‘Mac Malicsi, TNT’ as Sally Sumulong; Dennis Marasigan’s ‘Ang Buhay Ay Pelikula’ as a Chinese producer; Tony Perez’s ‘Octubre’ as the Woman; and Balagtas’  ‘Orosman and Zafira’ as Zafira,” along with other plays.

In the satirical “Ang Buhay Ay Pelikula,” Adlawan, with Chinese accent and all, did a wicked parody of Mother Lily Monteverde. For the bravura performance, she won the Best Actress of the Year award from the Young Critics Circle in 1992. Other awards came later for her work on the stage, films and TV.

Adlawan later became a resident actor in TP’s Actors’ Company, and was soon holding master classes for the young members of the group.

“Irma is one of the boys once the sessions are over,” TP artistic director Nanding Josef once told me. “But during the classes masungit yan (she’s strict).”

I passed on this assessment to Adlawan, and she just laughed it off.

Nonon Padilla, PhilStage Gawad Buhay! awardee for Lifetime Accomplishment, is another director she “would love to work with again and again.”

“I sharpened my craft under his tutelage,” says Adlawan. “With him, your thinking cap should always be on. You are always tested into knowing how an idea can be translated into action.”

Padilla was also famous among cast and crew for his delicious sandwiches.

“During our time with Nonon, it was a known fact that he always had baon sandwiches, from a simple peanut butter jelly sandwich to a spectacular tuna sandwich with no mayo. It was a known fact, too, that his mom (the late Noemi Guerrero Padilla) would send more than enough sandwiches for Nonon to finish. So the quest every day was, who will get the extra sandwich from Nonon? Who will he offer it to? And whoever got it was dubbed ‘anak ng diyos.’ I am proud to say I had that extra sandwich several times!”

The actress is also all praises for director Loy Arcenas: “I love how he handles his rehearsals. How he lets the actors discover and understand is such a divine experience for actors who yearn for learning.”

And there’s Herbert Go, “for his innovative take on everything he does.”

Memorable roles include Teodora (“I had only less than two weeks to memorize a 12-page monologue”), Dyablo in “Kwento ng Kawal” (“how physically draining it was!”), Sisa (“a Ryan Cayabyab musical, and a non-singer doing it, if you know what I mean”) and Medea (“an actor’s every dream”).

Adlawan says meaningfully, “Each role I did had its good and bad memories.” But she does not elucidate.

The theater, she concludes, “has taught me to understand people better. With the many roles I have studied, theater has widened my sphere of understanding, enabled me to grasp the different psyches of people, and their reason for every action.”