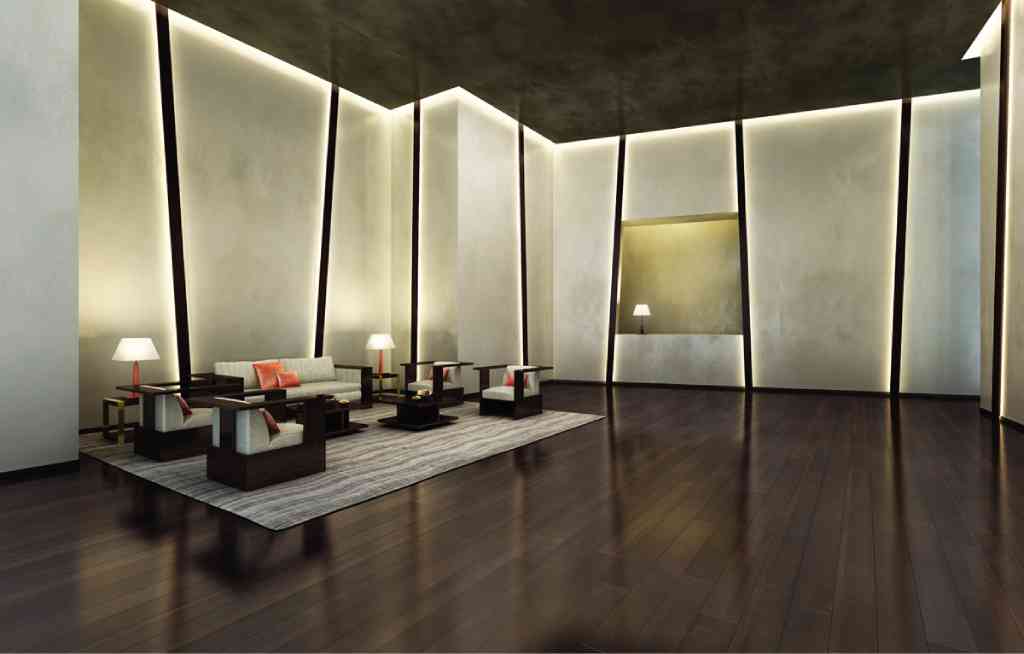 In 1996, he took a major gamble by building his first luxury condominium, Essensa East Forbes, at the then-undeveloped Bonifacio Global City. It was designed by the firm of architecture icon I.M. Pei.

The Asian Crisis had left the property market anxious and cautious, but Antonio’s company, Century Properties, weathered that storm and thrived.

In the past few years, it has collaborated with Versace Home, Donald Trump and Philippe Starck in building residential towers in Manila, and with Forbes Media for its commercial tower. The Antonios even invited celebrity Paris Hilton to design the clubhouse of Azure residences.

For the first half of 2013 (January to June), Century Properties earned P12.1 billion in pre-sales. Its presales target for 2014 is projected at P24 billion.

Where Acqua Iguazu by yoo has the fun and effusive Starck as design guru; Milano Residences has the bold iconography of Versace; and Trump Tower is imbued with the urban aesthetics of the Trump scions, the new tower will acquire the streamlined modernity and earth-tone sensibility of Giorgio Armani.

The 60-story Century Spire will be the eighth tower to rise in Century City, an upscale mixed-use development on Kalayaan Avenue, Makati City. Century Spire will have office spaces, Armani/Casa-designed amenities and residential units.

Architect Daniel Libeskind, the creator of Ground Zero, the redevelopment project of the former World Trade Center in New York, has designed a building with a crown composed of three interlocking blocks that open to the sky, resembling a flower in bloom.

The design is said to be evocative of the country’s progress. The local architectural counterpart is Gabriel Formoso and Partners.

“It will feel like a building in Milan,” said Antonio, who also revealed that when Century Spire is completed in 2018, Century Properties will move its headquarters there.

Prospective buyers can get ideas on how to decorate their condo when they visit the model units in February 2014. Armani/Casa will furnish these mock-ups with its signature fixtures such as the bathroom line, Armani/Roca, and the kitchen line, Armani Dada.

The Armani/Casa Interior Design Studio is reputed for its comprehensive interior design services that include adapting to the culture, the geography and the architectural milieu of its projects.

Antonio says the deal with Armani was brokered by his son Jose Roberto—Robbie to friends—who handles the company’s branding. A dedicated collector, Robbie met Armani in the international art circles.

Giorgio Armani, president and chief executive officer of the Armani Group, said in a statement: “If the architect’s aim is to create remarkable spaces, then it is my aim to bring these to life through my interior-design aesthetic. I am very pleased to be partnering Armani/Casa with Century Properties, and I believe that the combination of Daniel Libeskind’s vision and my own will result in a truly remarkable place to live, full of elegance and wonder.”

Antonio has received accolades for his achievements, the latest of which is Personality of the Year by the Southeast Asia Property Awards. A self-made billionaire, he started out by marketing building projects. His first development was the 12-story Le Grand Condominium in Salcedo Village.

Century Properties leveled up its strategy by venturing into international projects, starting with the I.M. Pei-designed Essensa East Forbes. The 13-year-old building looks better through time because of the travertine finishes.

“It’s the same marble that built the Colosseum in Rome,” said Antonio proudly.

Essensa is the only residential tower in the country that hosts 17 units occupied by a foreign embassy. Known for its generous cuts, Essensa’s average unit size is 290 sq m, which costs P50 million.

“The price has more than doubled because of its quality,” noted Antonio.

“We want to convey the message that Century Properties is about quality. Behind those brands is a specification of what a building should be. You can’t build a Trump Tower and have a glass of 1 mm. We have to follow their specifications manual. So when you buy a unit from our branded building, you are assured that what you are getting is of world-class standards,” he added.

While the government seeks foreign direct investments (FDI) through corporate investments or sovereign funds, Antonio said retail offers the biggest potential. “People buy units that cost $200,000 to $1 million. If you compile those, the sum is big. But it is not recorded as FDI.”

Last year, Century Properties raked in P21.4 billion in pre-sales. Only 26 percent of its buyers are based in the Philippines, while 74 percent are based overseas—foreigners, OFWs and Filipino expats.

Antonio said the Philippines is a late participant in the luxury condominium industry. However, local developers are having a field day with brisk sales. High-end condos in Metro Manila are still 85-percent cheaper than luxury condos in other Asian countries.

Century Properties’ luxury projects comprise 24 percent of its pre-sales revenues. The buyers consist of entrepreneurs and empty nesters who either invest in quality or for status.

“The fact that the property is branded enhances its asset value after five to 10 years. If you’ve got a brand, you can sell it and people will buy,” said Antonio.

Antonio, whose net worth is $255 million as of July 2013, is No. 35 in the Forbes List of wealthiest men in the Philippines.

Asked why he’s still spearheading Century Spire when he can just relax instead, the businessman replied: “I’m not handling this. There is a team. I’m just your friend.”