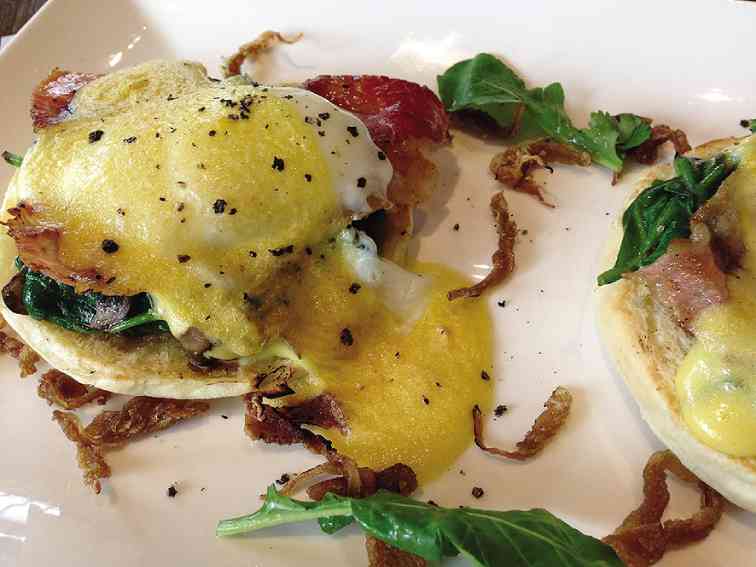 It’s been a topic of debate whether a sous vide egg should be cooked at 63ºC, the most commonly given temperature, or at 64.5 degrees. (Sous vide is a cooking method where food is vacuum-sealed, then cooked slowly in temperature-controlled water bath.)

At a water bath set at 64.5 degrees for two or three hours, the egg white starts to set, but still holds it shape while still being a creamy, unctuous mess that coats the roof of one’s mouth, spreads over the plate and dribbles down one’s chin.

At Hatch 22, the much-anticipated bakery-café that has just opened at Rockwell, the sous vide eggs on the Eggs Benedict have found the magic temperature at which they are perfectly set. Eggs benedict has become the dish that’s imperative to master in the latest cult of all-day breakfast.

Hatch 22 looks like an expanded Wildflour with an added bar area. It even feels like Wildflour, with the tall glass windows, bare cement and industrial ceiling.

We popped in one evening; out of two items we ordered, only one arrived, and the waiters didn’t give us cutlery.

We would usually not go back to a restaurant that misplaces half of our orders, but we felt we should plumb the depths of its inadequacies before writing it off completely.

So we went in for a late brunch. It’s a much prettier place at daytime than at night, when hard lighting glints off hard surfaces.

But everything you might have heard about the service is true, and worse. There are so many staff members that they could have assigned one person to each table, but instead they wander about like a bunch of zombies with a dazed but purposeful look, signaling frantically at each other and looking confused.

One waiter took our orders, then went off on an aimless stroll and did something else. Then three more waitresses tried to take our orders, so we didn’t know who finally pushed it through to the kitchen. This time they lost only a quarter of our orders—at least an improvement from the last time.

In every restaurant we go to, we ask the waiter: “What do you recommend?” And they almost always reply: “Our bestsellers are so and so…” In the strictest sense it’s also a

recommendation. But we also like the idea of a chef being particularly proud of one or more of his dishes. We also miss old-fashioned maître d’s who really knew the menu and could guide you through it (and on subsequent visits also remembered who you were and what you liked), so that ordering became more of a conversation rather than punching in random selections, like playing Battleship.

And so we ordered the “bestseller,” the Eggs Benedict. We recommend it highly, it’s worth the price of entry.

The Strawberry Pancakes, which we also ordered, were properly light and fluffy, and the jam filling in the hollowed-out stack not overly sweet.

We do not recommend the Manila Breakfast, which felt like someone strolled over to the ham stall in a supermarket and then strew slices onto a plate from a great height. No wonder it isn’t a bestseller.

Go on a lazy Sunday

The English Trifle was properly stodgy (which is how it should be), but erred on the sweet side. The coffee was watered-down and runny.

Other items we wanted were either not yet available, out of stock, or had just run out. So, why have overly ambitious menus if you can’t fulfill them? And why do restaurants insist on opening before they’re ready?

Despite these gripes, we think Hatch 22 will survive its teething pains and become a welcome addition to the limited food ecology of Power Plant Mall.

And there seems to be some good things going on in the kitchen, which are, unfortunately, let down by the complete chaos caused by the front-of-house staff. There’s still more good food than bad, and even if the place just gets its coffee somewhat right, it will give Starbucks and Pancake House a run for their money with the power breakfast crowd.

For the moment, though, arm yourself with a liberal dose of patience and go to Hatch 22 on a lazy Sunday.