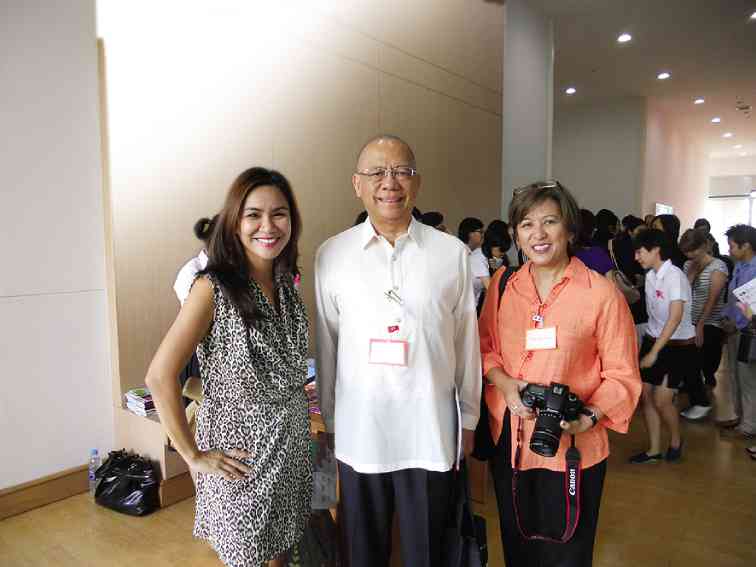 Nestled in the 19th-century wing of Mandarin Oriental Bangkok is the Authors’ Lounge, which, according to the sign, serves afternoon tea in the “charming ambience of bygone days.”

A century hence, whose picture will be added to this gallery of treasured wordwrights?

The Asia Pacific Writers and Translators Association’s “Reaching the World 2013” was held Oct. 3-6 in Bangkok, Thailand. Hosted by Chulalongkorn University with the collaboration of the Bangkok Metropolitan Administration, this year’s international conference was titled “Creative Writing and Literary Translation: Teaching and Practice.” The last day of the festival was held in the Bangkok Arts and Culture Center, in conjunction with Unesco’s “Bangkok World Book Capital City 2013.”

The conference’s opening provocation on “Against Creative Writing and Literary Translation” was delivered by American H. L. Hix. The soft-spoken poet warned against “anticipatory translation,” in which the translator is pressured to write in “large languages,” i.e., the language of the powerful and the dominant. To him, the term “creative writing” compartmentalizes and deflects the power of literature, for it suggests a level of triviality and irrationality.

The conference appeared to be bathed in a romantic light, as its myriad topics seek to unlock the mysteries of the writer’s life: What makes writers (re)write, what drives the writer, a day in the writer’s life, the importance of community for a writer. The audience were treated to both serious and trifling things that writers usually engage in. The many speeches resonating through the hallowed hall of Chulalongkorn’s Maha Chakri Sirindhorn, some almost confessional, revealed how one lives, suffers and triumphs as man or woman of letters.

This panel cited some particular fears of creative writing teachers: a prescriptive pedagogical approach to creative writing, a tendency to “dictate” the rules of the games to the youngsters, and the possibility of producing graduates who write like the prescribed authors in the syllabi.

The writers implicitly agreed that students of creative writing should undergo a period of apprenticeship, learning the various styles of writing in order to find their own voice. A creative writing program should ground the students in the reality and culture of their society.

In another panel, with Isagani R. Cruz serving as the chair, an invigorating discussion on theory vs practice ensued. A guru to many budding Filipino scholars, Cruz declared in his usual fearless way that “William Faulkner would never have finished writing ‘The Sound and the Fury’ were he in a writing workshop with academics—who are basically academics rather than writers—who would castigate him for shifting point of view not just in the middle of his first chapter but in the middle of his sentences.” He then slew his own daemon with “interrogative” statements hurled at the panel: Does a creative writing degree program need a full course in literary theory? Do writers need theory at all?

On the panel were Katy Shaw (UK); Rukmini Bhaya Nair (India); Sandra Nicole Roldan (Philippines); and Iwan Sulistiawan (Indonesia). Roldan remarked that her classes at the University of the Philippines emphasize a theory for writing, rather than literary theory. Calling writers the “most inquisitive people,” Shaw defended theory for its facility in “preventing us from making uneducated opinions.”

Nair sought to address the notion of human need (e.g., “We need food to survive”) by underscoring the “epistemic hunger” within a writer for the fulfillment of the mind. Theorizing is a response to that need. What Nair stated in a sense accentuates the writer’s temporal significance. She argued: “Shakespeare, Johnson and company would not have survived without a critical industry to support them.”

This conference afforded literature lovers a wondrous occasion to meet established writers from the region, with their storeroom of quirks, and to catch a glimpse of new writers, with a gleam of what they can be in the future.

Speaking of the writer’s destiny, the Argentinean master Jorge Luis Borges mused: “I have now conquered my poverty, recognizing among thousands the nine or 10 words that get along with my soul; I have already written more than one book in order to write, perhaps, one page. The page that justifies me, that summarizes my destiny, the one that perhaps only the attending angels will hear when Judgment Day arrives.”