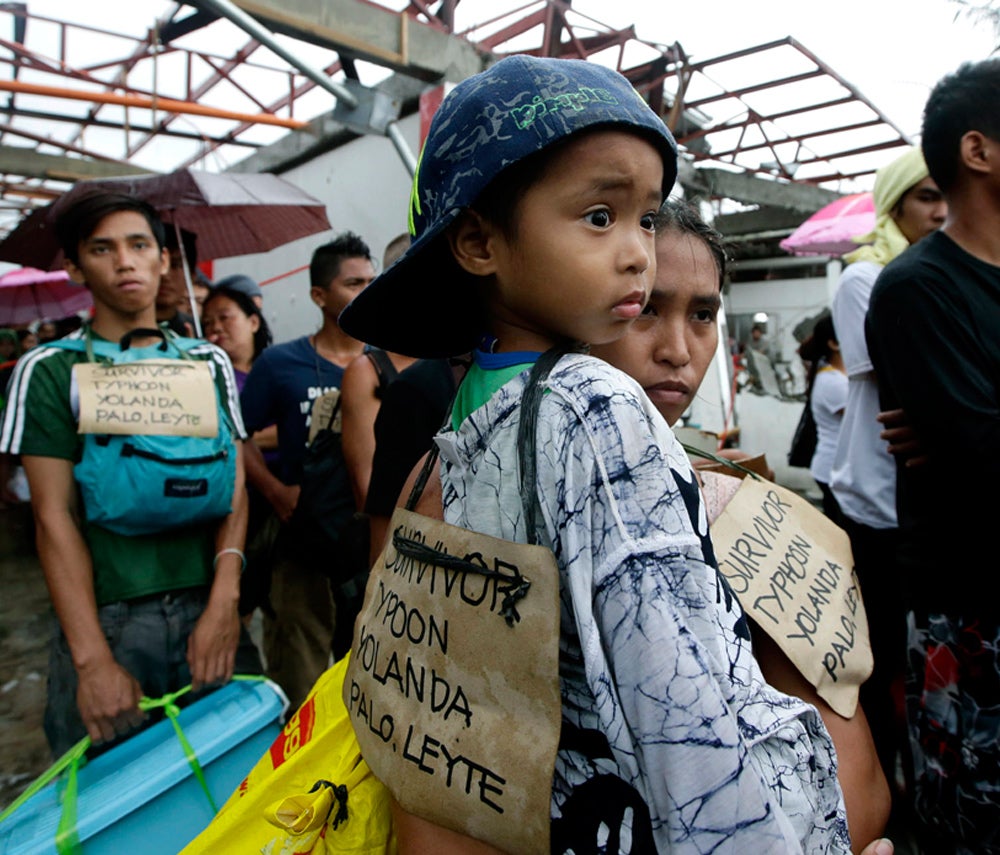 Typhoon survivors hang signs from their necks as they queue up in the hopes of boarding a C-130 military transport plane Tuesday, Nov. 12, 2013, in Tacloban, central Philippines. Thousands of typhoon survivors swarmed the airport on Tuesday seeking a flight out, but only a few hundred made it, leaving behind a shattered, rain-lashed city short of food and water and littered with countless bodies. The typhoon, known as Haiyan elsewhere in Asia but called Yolanda in the Philippines, was likely the deadliest natural disaster to beset this poor Southeast Asian nation. AP Photo/Bullit Marquez

In this rare instance, you are at a loss for words, or even thoughts. You are overwhelmed by images of destruction and tragedy which aren’t newsreels from some remote place abroad. They are from right here, at home, and somehow, you know of at least one person who is a casualty of this disaster.

The destruction in Tacloban and of a great part in the Visayas has no singular human face. In truth, it carries your very own face as a Filipino.

An infant having slipped off the arm of its parent. The elderly parents of your former publishing colleague being swept away, and have yet to be seen.

Indeed, your imagination takes over when the images and stories are caught in a gridlock in your mind. In your disbelief at the extent of destruction—and the lawlessness that followed—you can only imagine.

What’s more tragic is that “Yolanda” came just when you were still trying to stomach the sight and (non)sound of Napoles on nationwide TV, at the Senate.

You can’t help but wonder, yet again, what the billions of pesos—which politicians had been methodically, assiduously and, without remorse, siphoning off the government coffers the past decades—could have done all these years to build the good-quality infrastructure and better the lives of people, especially in the provinces.

Most probably, not even man’s strong preparedness could have stopped the onslaught that was Yolanda. But then, if our corruption wasn’t so endemic, still, social development would have happened at a much faster rate, and our communities not reduced to utter helplessness every time disaster strikes.

It will be remembered that, at the start of this administration, among the first moves of President Aquino was a revamp of Pagasa after he expressed utter dismay at inaccurate weather forecasts. He encountered this even as he came upon a nearly depleted government calamity fund—at the start of his term.

Pagasa’s weather forecasts have considerably improved, serving a populace which, like it or not, has not only made it a habit to check the forecasts, but has also developed a mindset for disasters.

People are not only aware about detailed corruption through pork barrel, they also continue to resolutely protest against it.

Yolanda will put to the test if, indeed, government funds will now be spent honestly, wisely and for the common good.

We can only hope that these successive bad news, indeed these successive crises and calamities, if they don’t break us—and they won’t—will put a stop to corruption, orient us to the national good, and unite the country in the task of rebuilding under a strong and morally upright leadership.  Anything less won’t do.

With thousands upon thousands of lives lost, the damage seems irreparable; the trauma cuts too deep. Yet our Christian faith dictates that we believe cleaning and rebirth come after suffering and death. The Filipino prays.

Relief efforts are pouring in from all over. Hopefully, in time, full rehabilitation can be undertaken.

Right now, various segments of lifestyle, from the fashion industry to the food and culinary sector, are poised to mount fundraisers for both relief efforts and rehabilitation.

We now live one day at a time, with faith in our heart.