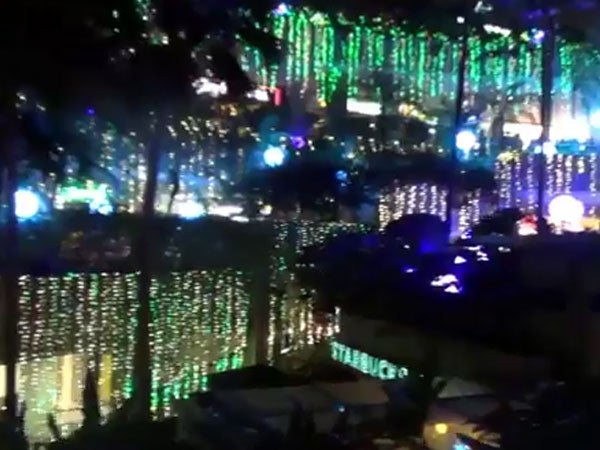 Tripping the lights and sounds fantastic in Quezon City mall

Christmas begins early at TriNoma mall in Quezon City with its “Merry Musical Lights,” the annual lights and sounds show, now on its second year. Starting November 9, every day at 7 pm, 8 pm and 9 pm, color changing spheres and sparkling lights will be lighted at the TriNoma Garden Restaurants until January 5, 2014. Video by Noy Morcoso lll

MANILA, Philippines – A shopping mall in Quezon City is using lights and sounds to bring cheer to their customers amid such trying times, in anticipation of the holiday season.

“This year’s display of lights is expected to be more fun and lively with color-changing spheres and sparkling lights scattered around the garden restaurants,” TriNoma general manager Anthony Sablan said.

The show, which plays for eight minutes every 7 p.m., 8 p.m., and 9 p.m. until January 5, 2014, features Filipino and foreign Christmas songs set to a dazzling light display.

Some recognizable tunes include “Joy to the World,” “Hark! The Herald Angels Sing,” “Noche Buena” and “Mano Po, Ninong.”