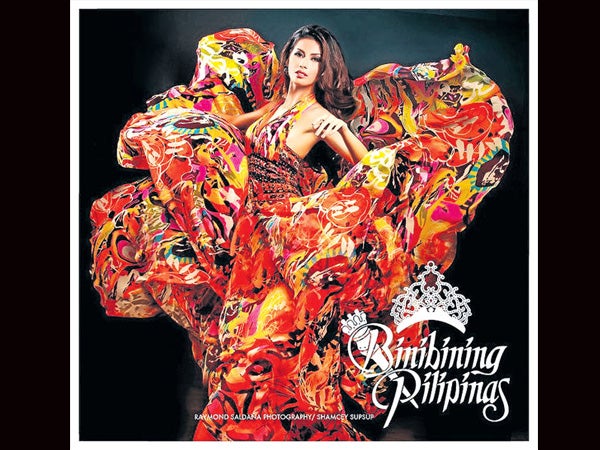 PAGEANT FAVORITE Binibining Pilipinas Shamcey Supsup appears to float on air in this photoshoot with lensman Raymond Saldaña held days before her departure for the Miss Universe pageant in Sao Paulo, Brazil. The 25-year-old architecture board topnotcher faces a field of 88 other international beauties in today’s pageant at Credicard Hall that will be seen via satellite around the world. PHOTO FROM BINIBINING PILIPINAS CHARITIES INC.

Binibining Pilipinas Shamcey Supsup is among the favorites to win the Miss Universe title this year, according to a former winner and a former national pageant director who has produced formidable candidates.

Canadian beauty Natalie Glebova, who was proclaimed Miss Universe 2005 in Thailand, included Supsup among her first five picks for the title after viewing the pageant’s preliminary presentation show on Thursday (Friday in Manila).

The 89 candidates introduced themselves and paraded in identical swimsuits and in different evening gowns during the event, considered a defining moment in selecting the semifinalists who will contest the coronation on Tuesday.

Glebova also named Ukraine’s Olesia Stefanko, Luo Zilin of China, Aruban Gillian Berry and Adriana Dorn from Nicaragua among the five delegates who caught her attention and whom she predicted would likely land in the semifinals. She posted her list on her Facebook fanpage (www.facebook.com/MissUniverse2005).

In her blog (inesligron.com/blogroll), Ligron considered Supsup, Biggs and Henry as having the “full package” and cited the three for their “amazing body, great catwalk, fresh face, charismatic aura, stunning dresses,” and for being naturally beautiful and elegant on stage.

Ligron also named among her final five choices for the title this year Mexico’s Karin Ontiveros and Sheldry Saez from Panama. She also called attention to Luo, Stefanko, her compatriot Laury Thilleman, and the contestants from Angola, Argentina, Greece, the Netherlands and Venezuela.

Only Supsup’s name was in both Glebova’s and Ligron’s top favorites for the crown. The other candidates included in both experts’ expanded lists were the representatives from Australia, Mexico, Malaysia, China, Greece, Ukraine and Venezuela.

Even before the preliminary presentation, Supsup had already created a splash in Sao Paulo when she was chosen to speak in one of the pageant’s official events.

In “Operation Smile,” Supsup joined reigning Miss Universe Ximena Navarrete, Luo, Venezuela’s Vanessa Goncalvez and host delegate Priscila Machado in meeting members of the media. She was reported to have dominated the interview and showed an excellent grasp of the project’s goal of putting smiles on children born with cleft palates.

But after months of training, Supsup developed into a formidable international contestant. Her predecessor, 2010 Miss Universe fourth runner-up Venus Raj, noted Supsup’s “dramatic” improvement during the course of her preparations.

At Supsup’s send-off last month, Raj declared: “Once she is given a task, she really does her best. Whether it is for the family, business or school, Shamcey gives her all. And for Miss Universe, she has no other choice but to give her best, and to be the best.”

Supsup’s batchmates in this year’s Binibining Pilipinas pageant were also impressed with her presentation last Thursday.

“Her performance was breathtaking. It’s just her second pageant, but who would have ever guessed that? I have high hopes for her. I know she will deliver,” second runner-up Mary Jean Lastimosa told the Inquirer in a phone interview.

“All the training and hard work that we shared together paid off. I am praying for her. The Filipinos are praying for her. She’s been like a sister to me. I will always be willing to help her,” added Lastimosa.