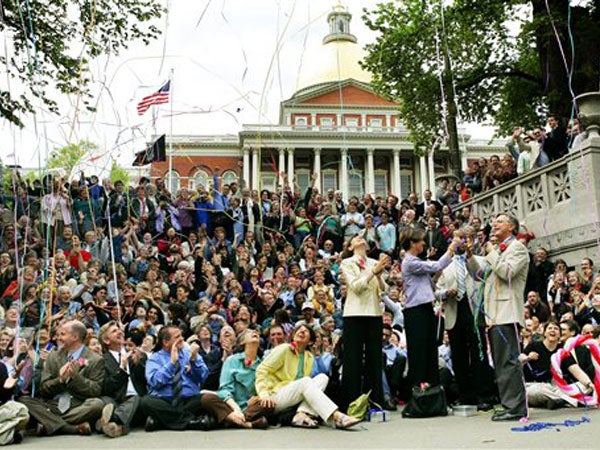 In this May 17, 2005 file photo, hundreds of gay couples and supporters look up while streamers fall at the conclusion of a group photo in front of the Statehouse in Boston, one year after Massachusetts became the first U.S. state to recognize same-sex marriages. It’s been a decade since the highest court in Massachusetts issued its landmark ruling legalizing same-sex marriage by declaring that barring marriage for gay couples is unconstitutional. Since then, 14 other states and the District of Columbia have legalized gay marriage, with Illinois posed to become the 16th state next week when the governor is expected to sign a gay marriage bill into law. AP

BOSTON  — In the decade since the highest court in Massachusetts issued its landmark ruling legalizing same-sex marriage, 14 other states and Washington, D.C., have legalized it, with Illinois poised to become the 16th in a few days.

Such gains were considered almost impossible before Massachusetts opened the door on Nov. 18, 2003, with a Supreme Judicial Court ruling that declared a ban on gay marriages unconstitutional. Opponents made doomsday predictions about how gay marriage would damage traditional marriage and lead to problems with children raised in same-sex households.

But as the years have passed, public opinion has shifted. Supporters have won in the courts, in state legislatures and on state ballots amid intense lobbying, activism and advertising campaigns filled with gay couples’ personal stories.

“With more same-sex marriages, you saw more people changing their minds,” said Mary Bonauto, civil rights project director at Boston-based Gay & Lesbian Advocates & Defenders and the lead attorney on the lawsuit that resulted in the gay marriage ruling in Massachusetts.

“Seeing gay people with their extended families, seeing the commitment, that’s what has turned this around.”

Opponents have shifted tactics as more and more states have legalized gay marriage. Initially, opponents of gay marriage focused on the predicted erosion of traditional marriage, but in recent years they have pushed concerns about school curriculums and religious objections.

In New Mexico, the state Supreme Court ruled in August that an Albuquerque business owned by gay marriage opponents violated a state anti-discrimination law when it refused to photograph a same-sex couple’s commitment ceremony. A law firm representing the business has asked the U.S. Supreme Court to hear its appeal.

Opponents say they plan to do a better job of telling similar stories of people who believe their religious freedoms have been infringed upon by the legalization of same-sex marriage.

Since same-sex marriages began in Massachusetts in 2004, approximately 100,000 gay couples have gotten married across the U.S., said Lee Badgett, a professor of economics at the University of Massachusetts-Amherst. At least 16,000 of the marriages have taken place in Massachusetts.

Evan Wolfson, founder and president of Freedom to Marry, said 38 percent of Americans will live in states where same-sex marriage is legal once Illinois’s governor signs the bill on Wednesday. The group has a goal of bringing that up to more than 50 percent by the end of 2016.

“What we have to do — like other civil rights movements and social justice causes — is win a critical mass of states and a critical mass of public support, which together creates the climate for the Supreme Court to bring the country to national resolution,” Wolfson said.

Wolfson said Oregon is expected to be a key battleground in 2014 as supporters hope to repeal a constitutional ban on gay marriage passed in 2004 during a rush of similar amendments in other states after the Massachusetts’ ruling.

But Staver said he believes the momentum of the gay marriage movement will slow.

“Same-sex marriage represents a classic conflict with religious freedom,” he said. “I think there will come a tipping point where the pendulum will swing the other way as people begin to see the impact of same-sex marriage.”

For gay marriage across US, more battles ahead