For a moment, US stopped to say farewell to JFK | Inquirer Lifestyle ❮ ❯ 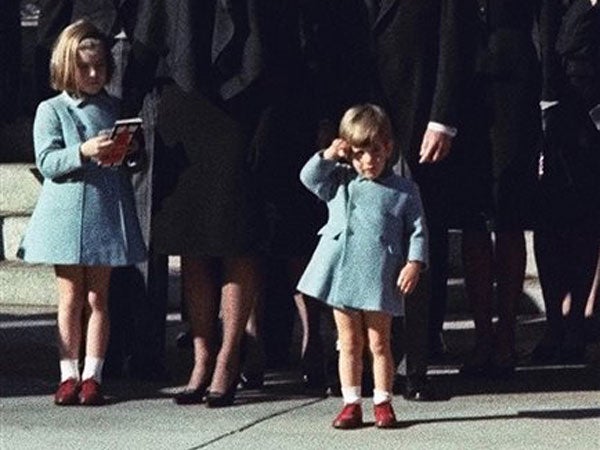 For a moment, US stopped to say farewell to JFK

The horse’s name was Black Jack. His saddle was empty, but boots were in the stirrups — backwards. Skittishly, he followed the body of John F. Kennedy on its last journey.

You could hear his hooves against the pavement, along with the clip-clop of the team of six white horses that pulled the caisson bearing the flag-bedecked coffin. And you could hear the muffled drums that resounded across Washington, and across the nation.

Fifty years have passed, but the sights and sounds of that November day are indelible. This was by design: With a fine eye, Jackie Kennedy helped orchestrate a funeral unlike any in American history, before or since. This was the final act in an unforgettable drama that began on Friday with the murder of the 35th president of the United States, continued on Sunday with the murder of his murderer, and came to a close Monday with the kindling of an eternal flame on a wind-swept Virginia hillside.

As one writer of the time suggested, the funeral was attended by 180 million Americans — the entire stunned populace. Only 50,300,000 American households had televisions in 1963, and it was estimated that 41,553,000 sets were tuned into the funeral.

They had been watching for days. Cameras in the Capitol rotunda followed mourners — a quarter million in all — as they filed past the casket. Cameras in the basement of the Dallas police headquarters caught Jack Ruby as he thrust a .38-caliber Colt Cobra revolver into the gut of Lee Harvey Oswald and fired.

And now they watched as an extraordinary pageant unfolded in front of them. At the White House, mourners and dignitaries joined the procession behind Black Jack: the black-veiled widow, the Kennedy family, President Lyndon Johnson. France’s Charles De Gaulle, ramrod tall; Haile Selassie, the Ethiopian Lion of Judah, more than a foot shorter, his uniform festooned with medals and gold braiding; all together, 19 chiefs of state and heads of government, assorted royal personages, all of them on foot.

At the Cathedral of St. Matthew the Apostle, they heard Cardinal Richard Cushing depart from the Latin at the funeral Mass for the nation’s first Roman Catholic president: “May the angels, dear Jack, lead you into paradise. May the martyrs receive you at your coming.”

Outside, as the coffin left the church, Jackie Kennedy leaned down and whispered a few words to John Jr., who turned 3 years old on that day. He lifted his right hand to his brow, a child’s farewell salute to his father; it would be the most memorable moment in a day full of them.

At Arlington, 50 jetfighters in a “missing man formation” roared overhead, Air Force One flew by and dipped its wings, a 21-gun salute resounded. The honor guard crisply folded the flag from the coffin. A bugler played taps, but cracked the sixth note; it was an error, but many took it as a reflection of the American broken heart.

Then, with the ignition of the eternal flame, it was over. Not the mourning — that would go on for months. And not the descent into violence — over the coming years, others would fall victim to assassins, among them the brother-in-law, Robert, who was at Jackie Kennedy’s side.

But the nation awoke from the fevered nightmare that had begun four days before, in Dallas. The funeral served that purpose.

“It was just about the best America could produce — meaningful, democratic, sincere, sorrowful, no phony emotion of any kind,” said Angier Biddle Duke, the State Department’s chief of protocol. “It brought out the best in everybody.”