To give, and not to count the cost | Lifestyle.INQ ❮ ❯ 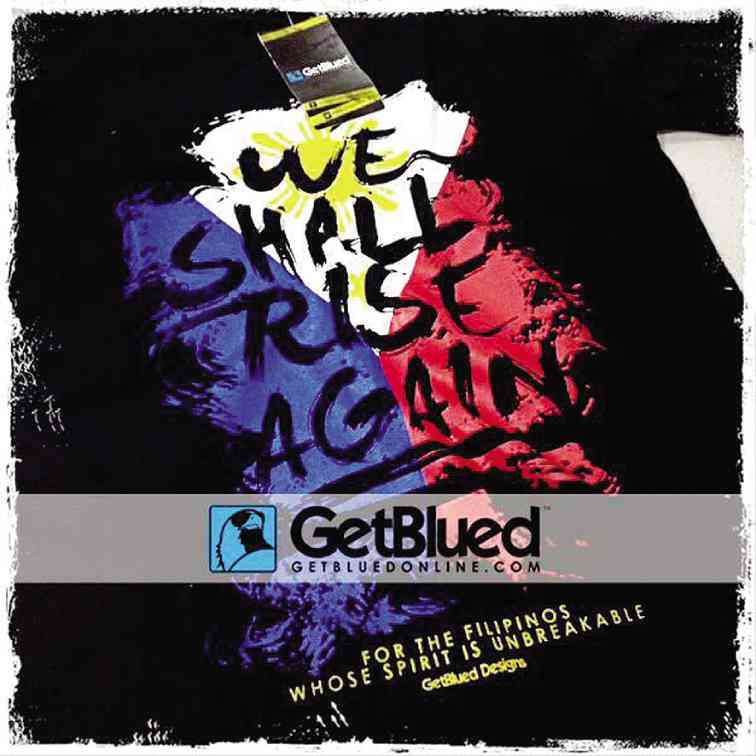 PROCEEDS of the sale of this Get Blued shirt will go to typhoon victims.

To give, and not to count the cost

A few days ago, a supertyphoon ravaged the southern part of the Philippines, particularly Samar and Leyte. Chaos ensued in these areas, reducing much of them to rubble, leaving thousands of people homeless.

There was a lot of finger-pointing, the blame game played because of what people felt was a slow response to the situation.

Nonetheless, the donations started to pour in, particularly from around the world. These got a lot of attention from the media, and donors were praised for their valiant efforts.

In the shadows were the efforts of the students, those who helped without asking for anything in return.

The Ateneo had been appointed as a satellite relief operations center for the Department of Social Welfare and Development, with De La Salle University. These two schools have been working nonstop to receive and repack the donations, and get them ready for delivery.

Spearheading the relief ops was the Ateneo Dream (Disaster Response and Management) team, in cooperation with the Jesuit NGO Simbahang Lingkod Bayan. The PE and NSTP classes of Ateneo participated in the relief ops, but more notable were those students, faculty members and alumni who volunteered.

These students and faculty members did their best to donate, either in cash or in kind. Some of the student-run food stalls of the John Gokongwei School of Management Student Enterprise Center set up collection boxes, and some even donated part of their earnings.

In high school, a human chain was formed so that the goods donated may be delivered from the high school campus to the home base in the college covered courts.

For the seniors, they did this for their Citizenship Advancement Training session, with the other year levels.

The most common donation of the students, however, was the most impressive of all: their time.

Some faculty members canceled their classes so that they  and their students could do volunteer work. What was amazing about this gesture was that some of these professors were so willing to cancel classes, even if Manila had not been hit by the typhoon.

To labor and ask not for reward

This shatters any colonial Manila stigmas anyone might have, that Manila is indifferent to what is happening around them, or Manila cares only when they are involved.

This gesture also imparts a valuable lesson, that help should be given at all times, and help need not be a hefty donation. It can simply be putting in time and effort to help others.

The call for able bodies was heeded, such that the relief operations became a nonstop event, with night and graveyard shifts.  Even if it was already late, even if they were still students who have to worry about classes the next day, they went to volunteer,  to a point where more volunteers could no longer be accommodated due to sheer number.

What did these students get for volunteering? Nothing.

Or it is more accurate to say, nothing physical. It is not certain if the students were given bonus points for their effort. The students lost considerable time they could have used to study, sleep or spend with their family. A reward is very much well-deserved. But it is not the point.

The whole point of volunteering is not to get a reward, but to serve. The students are just too happy to know that they have made a difference in the lives of those in need, even if they are not recognized for it.

Never mind that there are no gold medals to be given away, or for the family who receives the goods to know who they are.

It is so heartwarming to see the youth willingly give their time and effort when the need  arises. They are indeed the hope of the future.