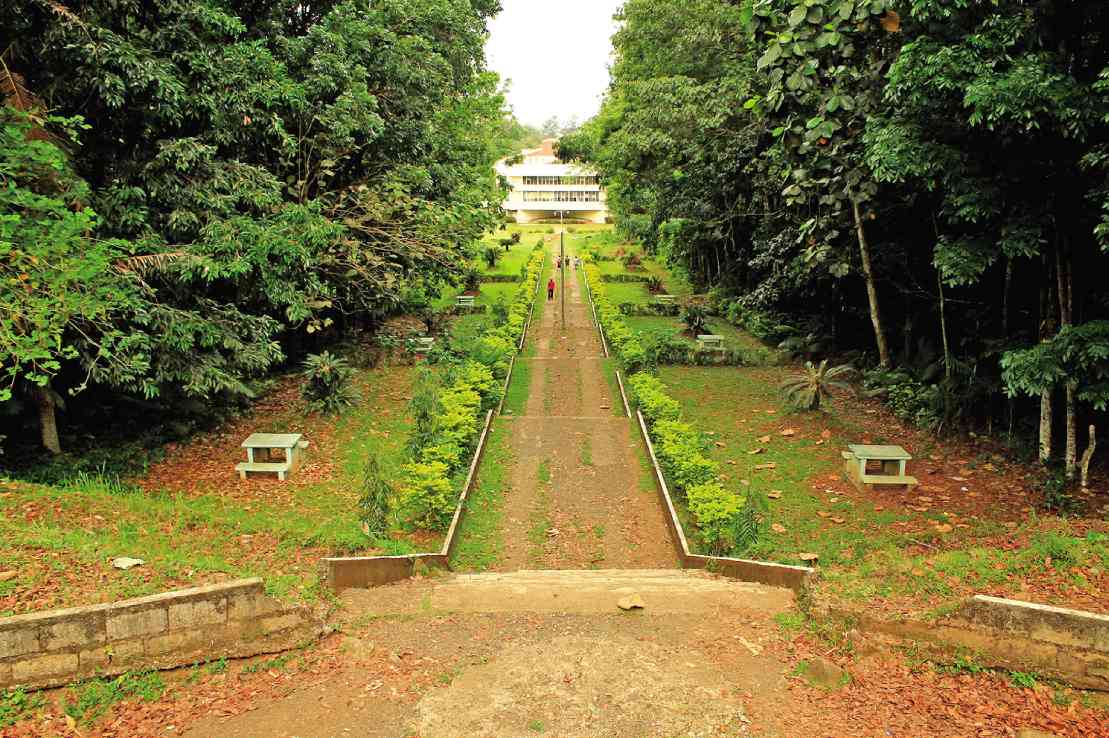 THE LIBRARY, where books can be a picnic

It is one of Bukidnon’s best-kept secrets—a state university sprawled on more than 3,000 hectares of contiguous campus marked, off the highway, by a volcano rising up dreamily over the calm, yawning flatlands.

Nestled 644 meters above sea level, Mt. Musuan looks like a postcard-pretty baby volcano that sweeps through a picturesque landscape in bucolic repose. That landscape just happens to be the rest of the campus, which is sheer pastoral pleasure: Ricefields, forest parks, ranch and grazing land; Olympic-sized sports facilities (including a competition-level swimming pool); areas planted to all kinds of trees, among others; as well as cottage housing and dormitories for teachers, staff, and students, aside, of course, from the usual school facilities.

“From a hospital to a market to a cemetery, we have it all,” says Soliven. “We produce our own rice, fresh milk, and vegetables. We have animals. We have fresh bread every day. We have lakes and springs around us. We are a paradise campus.”

Notes Dr. Anthony M. Penaso, CMU’s vice president for academics: “Our official time is from 7 to 11 a.m. so that we can all go home to prepare lunch and have siesta before coming back for work in the afternoon.”

Lost in the canopy of ancient acacias dotting the roadsides and corner lots, one is not surprised to find out that the university is all of 103 years old.

It was founded in 1910 as one of the settlement farm schools set up by pioneering Americans in Bukidnon. It was initially called the Mailag Industrial School, offering the first four grades of what was termed an elementary agriculture curriculum.

When female students were accepted in 1938, the school was renamed the Bukidnon National Agricultural School.

President Elpidio Quirino converted it into the Mindanao Agricultural College in 1952. Six years later, President Carlos P. Garcia granted the school 3,401 hectares of land. In 1965, the school was given its current name.

“Our scenic campus is only half of the picture,” says Penaso. CMU is also known for its income-generating projects: 1,000 hectares planted to cereals and grains; 400 hectares cultivated for high-value crops such as sugarcane, coffee and cacao, and rubber; 100 hectares for timber; and 100 hectares serve as a teeming orchard of fruit trees, such as durian, lanzones, rambutan, santol, and mangoes.

Affiliate institutions have leased part of the land. The Philippine Carabao Center, with its impressive Bulgarian murrah buffaloes, has the run of 50 hectares at the foothills of Mt. Musuan.

PhilRice has expanded its production of inbreed and high-breed seeds to 54 hectares.

So successful has the university been in its income-generating projects that, over the years, it has not had any reason to increase its tuition. The rate is still pegged at P90 to P150 per unit.

“And yet CMU continues to maintain its high level of excellence,” says Soliven. She beams with pride when she tells us that it is among the top eight national centers for excellence and development in both the public and private categories.

Its students have consistently topped in the licensure exams in agriculture.

Penaso says that the university’s national ranking in terms of performance in licensure examinations is no. 2.

CMU is also among the five state universities with Level 4 accreditation.

Penaso says that it is among the two Philippine universities which, defying the worldwide downtrend in enrollment, have posted an increase in students wanting to major in agriculture.

Soliven, who was dean of the College of Forestry before being installed as university president in July 8, 2011, vows to make CMU “the most eco-friendly university.”

She has also sourced funds to put up new buildings: One for a natural science resource center; another for biodiversity research; and still one more for a natural products analytical laboratory.

Her motto is “transformational leadership.” By this, Soliven means “not only the physical structure, the financial aspect, and the transparency and accessibility of information, but also transforming the people in the university through personnel effectiveness and values formation.”

A graduate of the University of the Philippines in Los Baños, Soliven wants “to safeguard and improve the greening of the university.”

Affirms Penaso: “We are gaining a reputation as a destination for conventions of the academe, LGUs, and religious organizations because of our unique scenery and our first-rate facilities.”

“Everyone is welcome here at CMU,” says Soliven.