4 kinds of ‘lechon,’ other Pampango favorites draw the crowds to this institution | Inquirer Lifestyle ❮ ❯ 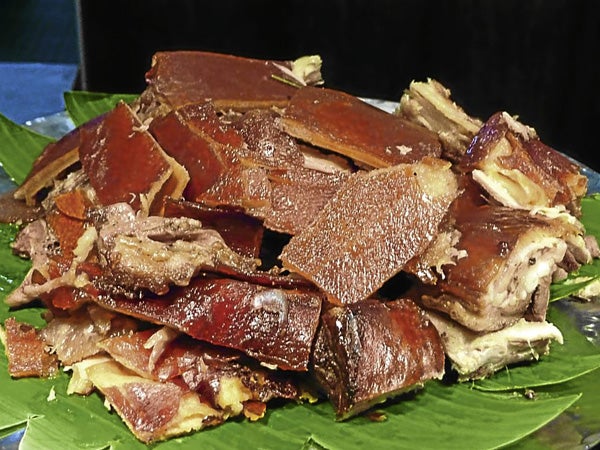 4 kinds of ‘lechon,’ other Pampango favorites draw the crowds to this institution 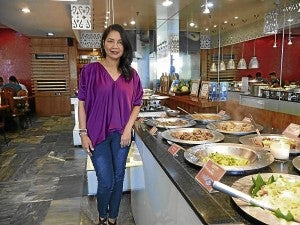 It’s a good thing there are plenty of dinner plates to go around in Cabalen, the restaurant that has been serving Filipino and Pampangueño food for the past 25 years. That’s because in the middle of your meal you’ll probably want to change your plate once, maybe twice.  How can you not, when the buffet table offers a wealth of classic dishes that define Filipino cuisine. Dishes like kare-kare (oxtail in peanut sauce); lechon (roasted whole pig, about which more later); kalderetang bibi (duck stew); sisig (chopped, grilled pork head); adobo (of pork, chicken and snipes); sinigang na ulang (river shrimps cooked in guava soup); and now (in some of its branches) Asian favorites as well, such as tempura, maki and teriyaki.

All are too good to pass up but to make the most of them, you’ll want to taste them not with their sauces running into each other, but separately, the better to savor the nuances and flavors of each dish. Thus, the necessary change of plates in mid-meal, a smart move in which the wait staff is only too willing to assist.

It has always been this way at Cabalen, come to think of it.  Even before it began serving buffets, even while it was still a fledgling restaurant in West Avenue, Quezon City, way back in 1986, Cabalen was serving classic Filipino cuisine cooked the Pampangueño way, which meant heavy sauces and gravies as well as a variety of dips and relishes.

Since it was the kind of restaurant where people would come as a group, and food would be served family-style, customers would often order a good number of dishes, making their tables mini buffets unto themselves. When management decided to offer buffet service, it was only formalizing what customers were already doing anyway.

But now that it has reached 25 years of service, owner Maritel Nievera has instituted more changes, while remaining true to the spirit in which Cabalen was founded.  At the Glorietta branch in Makati, the look is a combination of the rustic and the contemporary.  Wooden chairs flank shiny wooden tables, old photographs hang from the wall and the flooring is made of old-fashioned Machuca tiles, which look like unpolished stone. But capiz chandeliers shaped into a rectangular stream and wall mirrors add a modern touch, as does the bright lighting that illuminates the buffet table.

The food, of course, remains the major crowd drawer.  Here is where customers can taste real Filipino food cooked the traditional, old-fashioned way.  The kare-kare is made of oxtail, 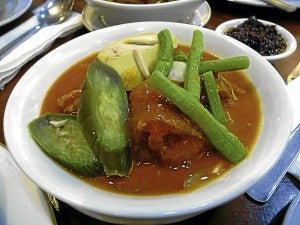 simmered ever so slowly to tenderness in a sauce flavored with peanuts that someone had patiently pounded into submission. Enhancing it are a dip of home-cooked bagoong alamang, as well as the classic mix of vegetables: okra, sitao and eggplants, cooked just long enough as to still retain their fresh, green colors.

Then there’s adobo, the garlic-and-vinegar stew that some would say is the Filipino national dish. Sometimes the adobo would be of pork and chicken, but when it’s available, it would be of snipes instead, those tiny birds locally known as pugo which are locally bred.

Another classic on the buffet table is kaldereta, a Filipino stew of beef or goat meat, or, in this case, sometimes of duck meat (bibi).  The oft-used adjective “falling-off-the-bone” tenderness could well apply to the meat in the kaldereta, so much so that the meat further thickens the sauce in which it had been simmered.

About the lechon: Cabalen is probably the only restaurant that serves four kinds of lechon, which means you can practically build an entire meal on the lechon alone, or more like a mini meal within a meal (considering all the choices on the buffet).  You can, for example, start with an appetizer of pritchon—slivers of lechon meat and crisp skin, cucumber and coriander slices enclosed in tortilla wrappers and served with hoisin or liver sauce. You can even choose from three kinds of wrapper: plain, spinach-flavored or tomato-flavored. (To make sure the filling retains its freshness, the pritchon is assembled by the staff only upon request.)

Then there’s the soup of sinigang na lechon.  While it’s admirable enough that the kitchen still makes the soup from scratch (tediously extracting the flavor from fresh, sour tamarinds), the hefty chunks of lechon afloat in the soup make it even more commendable. Truth to tell, the first time I heard of lechon being made into sinigang, I had serious doubts about its viability.  But one scoop of Cabalen’s version banished all my doubts and I’m now an avid convert to this new way of serving lechon. 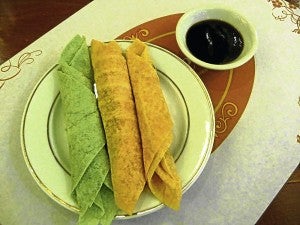 In contrast to the sourness of sinigang, there’s the delightful sweetness of paksiw na lechon, where the liver sauce dominates the flavor. In this dish, the lechon meat, having been slowly cooked in a mixture of liver sauce, sugar and vinegar, has a very pliant texture, yielding easily to fork and spoon and making it perfect for mixing with white, freshly cooked rice.

And finally, for a fourth course, there’s the freshly roasted lechon, with its glistening, golden-brown skin promising of crispness. Coming as it does at the far end of the table, it’s like the highlight of the buffet, the piece de resistance that can break the resolve of even the most tenacious dieter.  If paksiw is the soft-spoken version of lechon, this one is its more outgoing sister, bolder in taste and texture, and able to satisfy the palate without need of an accompanying side dish, save for the liver sauce that’s both dip and gravy.

And yet there are simpler dishes, too.  Everyday food like tocino, longganisa and tapa; kangkong, dinuguan and fresh lumpia. To complete them, a phalanx of dips, relishes and sauces are lined up in front, like obedient soldiers on the first line of defense: three kinds of achara (singkamas, papaya and gulay), two kinds of vinegar, chopped onions, sliced tomatoes, bagoong, burong hipon (fermented shrimps), patis (fish sauce), soy sauce, hoisin, wasabi, calamansi, lemon and chilies. There are three kinds of rice, too: white, crab and the now rare-to-find bringhe, rice simmered in coconut milk.

While all those are indulgences enough, some branches of Cabalen have added an Asian section as well, with popular dishes like tempura, teriyaki and maki being prepared by a Japanese head chef.

“It’s our way of going with the trend,” says Nievera.  “With these new dishes, there’s now something for every member of the family.  They can all eat together, because both young and old can find something they like.” The young will certainly delight in the sisig maki, which makes a great appetizer and pulutan.

For dessert, they will likewise enjoy the chocolate fountain, from which they can dip skewers of marshmallows, as well as the make-your-own halo-halo, with its myriad ingredients (sweetened beans, caramelized bananas and jackfruit, gelatin, kaong, leche flan, crushed ice and milk).  For the more traditional desserts, there’s tamales, suman and melt-in-the-mouth tibok-tibok made with pasteurized carabao’s milk supplied by the carabao center in Nueva Ecija.

The 25th year of Cabalen hasn’t been all about food, however. Grateful for the success her restaurants have enjoyed, Nievera gives back to the community through her outreach program Cabalen Para sa Kabataan. Part of the program is rehabilitating libraries in places wherever Cabalen has a branch (of which there are now 13).  In line with the anniversary, Nievera’s target is rebuilding 25 libraries. Aside from providing books, electric fans and computers, they’ve painted murals on the library walls (at times with the help of her 18-year-old daughter and her friends).

Asked why her native province of Pampanga is known for its good cooks, Nievera speculates that it could be because Pampangueños have very cultivated taste buds.  The province being 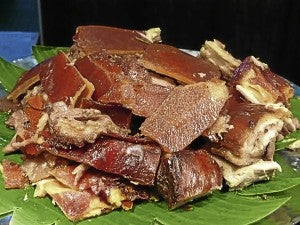 a prosperous one, its residents have the resources, time and leisure to indulge in home cooking and all that it entails.  The fact that it’s a sugar-producing province probably has a lot to do with it, too.

Apparently she has done well in bringing her beloved province’s cuisine to Manila.  The place has become popular not only among large groups of families but also among balikbayans, Filipinos returning from overseas. One evening, at almost near to closing hours, a man and his companions walked into the Glorietta branch in Makati and headed straight for the buffet table.  He had just arrived from Shanghai, he said, where he now lives. “This is my first stop,” he added as he and his companions scooped generous servings of food on their plates.