‘Exile is the dream of a glorious return’ | Inquirer Lifestyle 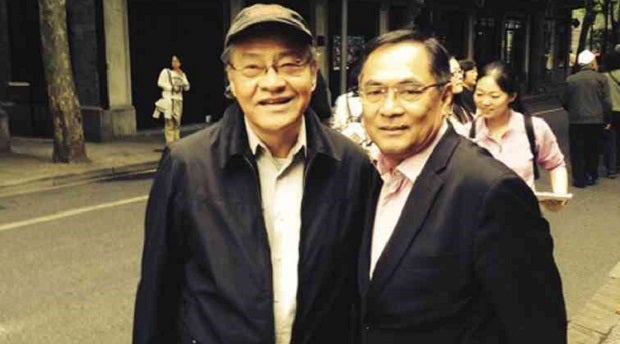 ‘Exile is the dream of a glorious return’

The annual conference of Wendy Kopp’s Teach for All global network of chapters from 32 countries, held this year in Tengchong, Yunnan province in China, began with a more exclusive retreat in Shanghai.

The retreat was for the youthful and impassioned CEOs heading their own Teach initiatives in their respective countries. They came from six continents, bound by the organization’s credo to provide educational equity for all students, regardless of their financial resources or socio-economic backgrounds.

Teach for All was born because of the many individuals interested in Kopp’s acclaimed education reform program, Teach for America.

The Philippines, Teach for All’s 25th member, was represented by Clarissa Isabelle Delgado, co-founder and COO of Teach for the Philippines (TFTP), which is on its first year of operation with 52 fellows in Grade 3 classrooms in 10 public schools in Quezon City. Co-founders Margarita Delgado and Lizzie Zobel were also in attendance. I was “incidentally” there as trustee of TFTP.

If these names sound familiar in nongovernment organization circles, it is because the previous reincarnation of TFTP is the 11-year-old Sa Aklat Sisikat (SAS) Foundation, as positively evaluated by the Poverty Action Lab of the Massachusetts Institute of Technology’s impact survey.

SAS has been transformed from its literacy advocacy to its present crusade to attempt to improve the public education landscape through institutional changes, such as the quality of teaching fellows it recruits for the system.

TFTP, like SAS, is operating in collaboration with the Department of Education.

The assembled 32 CEOS were all concerned about their home countries’ limited resources for public education and the lack of teacher training.

The choice of Shanghai was deliberate, for the leaders to see for themselves how and why the city has topped the Program for International Student Assessment  administered by the Organization for Economic Cooperation and Development  every three years “to measure how well a nation’s education system has been preparing its students for the global knowledge economy.”

With its initial participation in the exams in 2009, Shanghai had phenomenal results, bumping off traditional topnotchers such as South Korea, Finland and Singapore.

Their extraordinary life journey and decades of residence in China inspire and prove where persistence, patience and endurance could lead.

While both hold Philippine passports, they have lived in China for almost 40 years—and still counting for FlorCruz who still works there. Sta. Romana retired and resettled in Manila in December 2010.

Fortunately, there was no crisis nor breaking news in China that FlorCruz had to cover during the Teach event, so he was present, as he promised.

He set the tone for the conversation by addressing the audience that, just like them, the 15-member Philippine youth delegation that he was part of on Aug. 20, 1971 did not intend to stay longer than the three weeks of their goodwill invitation from the Chinese government.

“Just like you, we were young and reckless and foolish,” he said, adding that they were the rabble-rousing shock troopers, the 1968 Paris student protesters, the anti-Vietnam War activists, the Occupy Wall Street contingent of their era.

Sta. Romana explained the circumstances of their trip. It was the first time a youth delegation from the Philippines had been invited to visit what was then known as Red China.

They couldn’t flaunt the invitation in the Philippines from the Chinese People’s Association for Friendship with Foreign Countries because they were carrying Philippine passports that explicitly said that these were not “valid for travel in Communist-controlled states” of the Soviet Union, Cuba, Korea and China.

And so off they went, a motley student group from different universities. They quietly left the country in small groups to avoid notice. Sta. Romana, of the Movement for Democratic Philippines, an umbrella organization of progressive groups then, led what was to be known as the Philippine Youth delegation to China.

They were initially oblivious to the political turmoil happening back home—the Plaza Miranda bombing in the first week of their visit, and the suspension of the writ of habeas corpus, which meant the police could arrest and detain anyone indefinitely.

Then came a published “wanted list” which included many members of the youth delegation.

Eventually, 10 of them inconspicuously returned to the country. Those who remained in China were advised by their families and legal counsels to “wait until further notice.”

The eventual declaration of martial law in 1972 was a major setback especially with another wave of arrests of student leaders like themselves.

How did their Chinese hosts feel about the overstaying Philippine youth delegation that was no longer quite so youthful?

Those who could not go home without fear of arrest and detention stayed on in China as their travel documents had already expired. The Chinese government welcomed individuals like them because its Constitution stipulates that it would provide refuge for anyone in danger of political persecution.

Life was not easy because they worked like the Chinese youth their age. Sta. Romana said they banished chauvinism from their minds when, on an initial experience to do backbreaking farm work, female workers taught them what to do. By the time the Filipinos learned the basics, the female workers were already fields away, having done their work more efficiently.

Not knowing when the political conditions in the Philippines would improve, Sta. Romana said the group’s only consolation was that they were younger than President Ferdinand Marcos and had every plan to outlive him.

China was not open to tourists yet, there was no postal service between China and the Philippines, and newspapers would come a week late.

It was from a foreign neighbor, who had foreign news subscriptions, that Sta. Romana found out that his twin brother Nelin had been included in the first wave of arrests the night martial law had been proclaimed. That was emotionally difficult, aggravated by the feeling of helplessness of being so distant and truly incommunicado.

To FlorCruz, a burden he carried over the years was seeing a Chinese girl, he had become close to, being taken away by the police because no such interaction was allowed then between a local Chinese and a foreigner. The guilt did not ease as he wondered whatever became of her, until he finally saw her one day, when she was already a married woman.

She reassured him that things were not so bad, although her family had to relocate elsewhere to live in anonymity to avoid the stigma.

The years of uncertainty and waiting were particularly trying. What were they waiting for?

The exiles decided to keep busy.

With all the time on their hands and the determination to learn Mandarin and Chinese history and politics, the remaining band of three, which included former University of the Philippines student council president and firebrand Ericsson Baculinao, took on jobs that required their growing mastery of the language and expertise on Chinese affairs.

Democracy had not as yet been restored in their home country, so with no travel documents and with a price on his head, Sta. Romana had to use a Chinese pseudonym. His translation work on economics and the articles he was writing for The Washington Post stopped with the paper’s policy disapproving pseudonyms.

The three members of the original delegation finally came home after Edsa 1 in 1986.

But in the face of instability in the early period of the newly restored democracy, they returned to China as practicing journalists, heading American news bureaus who employed them for their extraordinary expertise on the China mystique and their fluency in Mandarin.

Were they to relive those years, is there anything they would change?

Both admitting that the experience was probably harsher on the families left behind than on the exiles themselves, FlorCruz said he may fast-track some events, while Sta. Romana wished the length of time would be shorter.

This invitation to talk about a difficult chapter in their lives was extended with a degree of hesitation by Margarita Delgado. Might Sta. Romana and FlorCruz not mind having to relive their experience all over again? Would this be an intrusion on what they may wish to consider closed chapters of their lives?

There was little regret as they looked back. As FlorCruz always said, “we made a good thing out of a bad thing.”

Sta. Romana considered it such a privilege to have witnessed major historical events in China.

However, new pieces of information would surface, obviously brought to light only as pain eases with the passage of time.  It was no pleasant after-dinner conversation as the mood occasionally turned somber and heavy; but the retelling had a cathartic effect on the speakers and a powerful, inspiring one on the audience.

Richard Kanyane Masemola, CEO from South Africa, could only say in the context of African freedom fighters and Mandela’s own struggle: “I know exactly what you went through.”

Javier Rogla, CEO from Spain, just had to tell Sta. Romana: “I, too, have a twin, and I felt for you as you recounted the news of your brother’s arrest.”

In concluding the story of their exile, described in broad strokes primarily because of the extensive time span it covered, Sta. Romana advised the group, as he has often similarly advised his two sons, not to follow their example of overstaying in China, so “you can pursue your worthy cause of educating the underprivileged through your organizations.” Follow your dreams, follow your passion, said FlorCruz.

Salman Rushdie had said in his memoir about his hidden life as Joseph Anton: “Exile is the dream of a glorious return.”

To FlorCruz and Sta. Romana, the road to glorious return began in 1986 after the People Power Revolution and continues to lead them to more discoveries: a continuing growth and appreciation of Chinese politics and system of beliefs, and a heightened sense of country and nationalism. And always, along the way, a more genuine understanding of themselves and their lives’ dreams and goals.

After the CEO Retreat in Shanghai, the Teach for All conference came next. From the retreat group of less than 40, we numbered over 200 conference guests.

Two major highlights were my Thomas Friedman moment and getting to know Teach for America founder and Teach for All CEO Wendy Kopp up close.  She was named by Fortune in its Oct. 28  issue as one of the 50 Most Powerful Women in the corporate world today.

But even without that recent media splash, she is legend enough, having conceived of Teach for America in a Princeton undergrad thesis that became reality with the enthusiastic initial contribution of Ross Perot some 20 years ago.

Friedman, a three-time Pulitzer prize winner and New York Times foreign affairs columnist, is a close ally of Teach for America as his daughter Orly was a fellow and his wife is a first-grade reading teacher. He was a keynoter, and like the rest of us, was keen on exploring the public school system in Shanghai and Tengchong, joining all of our school visits.

Not having brought any of his books with me, I was desperate about getting his signature. I caught him as he was all set to fly back to the US via Singapore; although I said I only had a writer’s journal for him to sign on, he gamely obliged—documented here by FlorCruz.