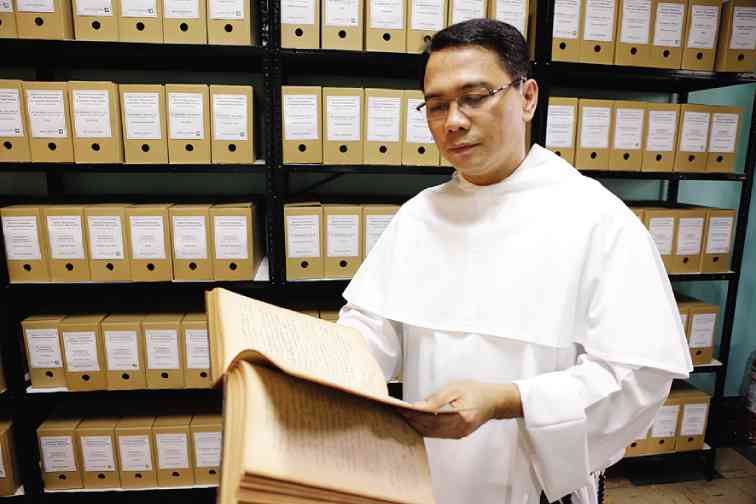 Filipino appointed as archivist of Santa Sabina in Rome

A Filipino has been appointed the archivist of the 797-year-old Order of Preachers in Rome, which holds some of the oldest documents in the world, such as the 13th-century Papal Bull approving the founding of the Dominican Order and causes for the canonization of hundreds of Dominican saints across eight centuries.

He is Fr. Gaspar Sigaya, OP, archivist of the Dominican Province of the Philippines (DPP) for 15 years. He will hold office at the convent of the Basilica of Santa Sabina, mother church of the Dominicans, the first religious congregation to be instituted by the Church to embark on academic missions in 1216.

The news has been well-received by the Philippine Dominican Province, which will mark its 42nd anniversary on Dec. 8, feast of the Immaculate Conception.

“I am very thankful for this opportunity that is given to me,” Sigaya said.

In a June 6 letter, Dominican master Fr. Bruno Cadore, OP, formally asked for the consent of Fr. Gerard Francisco Timoner, OP, DPP prior provincial, since the former intended to appoint Sigaya as prefect of archives of Santa Sabina.

“The principal task of the archivist is particularly an important mission in these years of preparation for the celebration of the jubilee of the order,” Cadore said.

With Timoner’s approval, Sigaya left for Rome on Aug. 28. After an intensive course in Italian at Florence and supplementary studies at the Vatican School, he assumed office at the Dominican archives.

To serve a six-year term, Sigaya will inevitably have a hand in the preparations for the celebration of 800 years of the order in 2016. Dominicans across the globe are already looking forward to the grand jubilee, especially since they were not able to properly commemorate the 700th year in 1916 because of World War I.

According to Cadore, a Council for the Archives of the order will support and accompany Sigaya in his duties at the Dominican Curia.

The Order of Preachers, or Dominicans, was formally approved by Honorius III in 1216. Four years later, the same pope asked the order to reside at Santa Sabina, where they established the first scholastic house of studies. The philosopher-saint Thomas Aquinas had taught philosophy in this institution.

A six-year vice head of the Committee on Archives of the National Commission for Culture and the Arts (NCCA) and president of the Society of Ecclesiastical Archivists in the Philippines (SEAP), Sigaya said the Church in the Philippines had a lot to improve on in terms of taking care of her heritage.

“The archives is where you can learn to appreciate the legacies of the past generations,” Sigaya said. “The problem is, for example, in old structures like churches, local authorities do not listen to experts such as professional conservators and archivists.”

Filipinos should realize how important archiving is in this country that experiences natural calamities every so often.

“The government, even universities, should encourage young people to pursue heritage and archival studies by giving them scholarships,” Sigaya said.

Sigaya, an Iloilo native, has bachelor’s degrees in Philosophy and Theology from the Philippine Dominican Center of Institutional Studies and the University of Santo Tomas Ecclesiastical Faculties, respectively. He finished his Master of Arts in Library Science at University of the Philippines Diliman in 1998.

Sigaya has also been a member of the secretariat of the Catholic Bishops’ Conference of the Philippines Permanent Committee on Cultural Heritage. He had  taken courses and seminars on iconography and archiving in Norway and the USA.