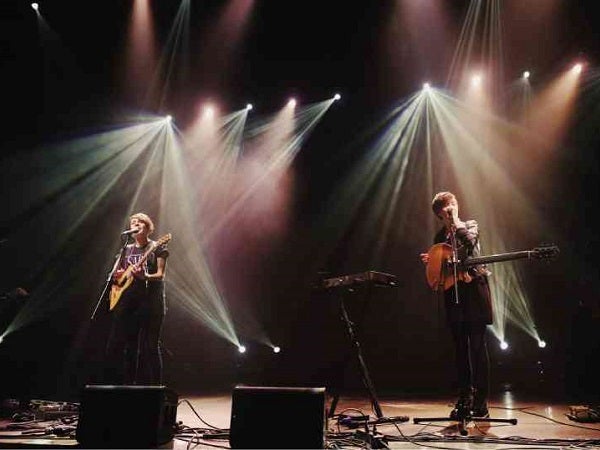 The crowd never stopped singing and screaming during the first-ever Philippine concert of Canadian indie duo Tegan and Sara recently at the NBC Tent in Bonifacio Global City, Taguig. 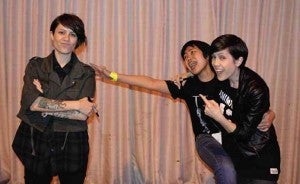 We still remember how heartbroken we were upon finding out that Tegan and Sara—who are identical twins—were playing in Singapore on the same day as the Philippine presidential election in 2010. It meant only one thing—there was no way we’d be able to see them in concert. Unless, of course, they decide to play in Manila.

This year that dream finally came true. Imagine, we were in line for 12 hours to see a two-hour show! But we’d be glad to do it again in a heartbeat.

Rock-star reception would be an understatement; in Tegan’s words: “We were like the Backstreet Boys!”—referring to the overwhelming welcome the group received from fans during the meet-and-greet at Greenbelt 5 a day before the concert.

Apart from their penchant for lining up crazy early, Filipino fans showered Tegan and Sara with lots of love, giving the artists all sorts of gifts: artwork, shirts, cookies, giant posters, among others.

Their passion also manifested in other forms. One girl was so happy to see her idols that she momentarily lifted Tegan off the stage. It was surreal.

At the concert it was pandemonium, from the moment Tegan and Sara opened with “Drove Me Wild” and “Goodbye, Goodbye” to the old favorite “Back in Your Head,” to “The Con,” to “Nineteen”—which Tegan dedicated to “everyone under the age of 20.”

The show was a good mix of old and new favorites; the crowd sang along throughout the fast-paced, 21-song set, belting out the lyrics to “I Couldn’t Be Your Friend,” “Now I’m All Messed Up,” “I Was a Fool,” “Love They Say,” “Shock To Your System,” “How Come You Don’t Want Me,” and the biggest crowd-favorite “Closer”—all of which were from the 2012 album “Heartthrob.”

The earlier hits such as “Walking With a Ghost” and “Where Does the Good Go?” likewise delighted the crowd, as did “Alligator” and “Arrow” from 2009’s “Sainthood.”

The crowd couldn’t have enough, even starting off the show’s encore by singing the first few lines in “Call It Off,” before reluctantly letting Tegan and Sara go after the finale number, “Living Room.”

Our only regret, it seemed, was that the concert didn’t last forever.

Here are 19 things we’ll never forget, including scenes with fans and comments by Tegan and Sara, while they were in Manila:

1) Tegan taking her jacket off to reveal she’s wearing the “Sara made me do it” shirt made by Filipino fan Teks Pabuayon. She wore the shirt throughout the concert! 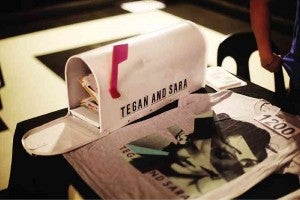 3) All the hugs, handshakes and selfies that the twins gladly accommodated, also at the meet-and-greet 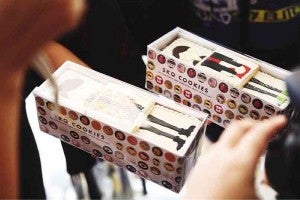 7) “I think, after this trip to Asia, we’d probably just move here and stop touring for a while.”

8) “Seriously. You put so many countries to shame right now. Just in four songs. Unbelievable!”

9) “Mad respect to the Philippines. You people, you get it done, you’re nice, you’re attractive, you’re friendly and a lot of you are about 5 feet tall.”

10) “We have two songs left. But we do have an encore. I couldn’t even think of an audience this year that deserve an encore more than you.”

13) Tegan and Sara fans who came early and brought food that went around while waiting in line at the concert—pizza, onion rings, donuts, gummy worms

17) Someone yelling, “Ang dami kong feelings!” in the middle of the concert.

18) Tegan and Sara dancing at the concert. (We caught this little Tegan shimmy while Instavidding “Drove Me Wild;” it was the most precious thing I have ever seen.)

19) Lining up for hours with the best bunch ever—shout out to the Tegan and Sara Philippines group, hands down the kindest, most dedicated, most passionate people we’ve had the pleasure of knowing.

Until the next concert!