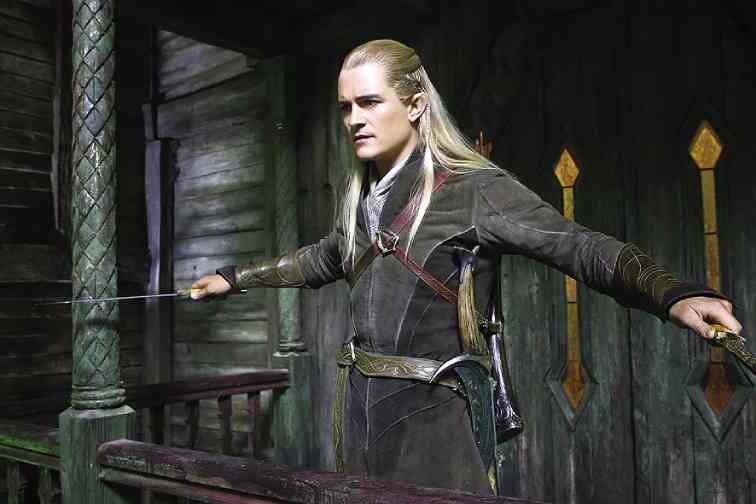 Actor Orlando Bloom, who was catapulted to worldwide fame playing Legolas, the dashing warrior elf in “The Lord of the Rings” trilogy of films, returns to the same role via Peter Jackson’s adaptation of another J.R.R. Tolkien classic, “The Hobbit.”

“The Hobbit: The Desolation of Smaug” is the second part of the “Hobbit” franchise, and it continues the quest of its heroes after they survived the goblins and a throng of enemies that tried to stop them from reclaiming what was once theirs.

“The Hobbit” is set 60 years before the events of “Lord of the Rings.”

Jackson has been credited for the fidelity of his adaptation to Tolkien’s works, so Tolkien purists are alarmed that he has insinuated Legolas into the “Hobbit” film adaptation when the character is not in the original book.

But Jackson has argued that it makes perfect sense for Legolas to be included in the “Hobbit” and that his adaptation remains faithful to Tolkien’s.

He explained that Tolkien later established in the “Rings” book that Legolas is the son of the Elvenking Thranduil, who is in the “Hobbit” novel, and since elves are immortal, Legolas  would have been around when Bilbo and the dwarves went tramping through the Wood-elves’ territory.

Of course, it helped that Legolas, as fashioned by Orlando Bloom in the “Rings,” is dashing and he makes ladies swoon.

“The Hobbit” narrates the account of the titular character Bilbo Baggins of his adventures some 60 years earlier.

Tricked by the wizard Gandalf into joining, Bilbo Baggins, along with 13 overzealous dwarves, sets out on an epic quest to reclaim the Lonely Mountain and the lost Dwarf Kingdom of Erebor which have been stolen from them by the dragon called Smaug.

Having survived the beginning of their unexpected journey, the company travels East, encountering along the way the skin-changer Beorn and a swarm of giant spiders in the treacherous forest of Mirkwood.

After eluding capture by the dangerous Wood-elves, the dwarves journey to Lake-town, and finally to the Lonely Mountain itself, where they must face the greatest danger of all—a creature more terrifying than any other, one which will test not only the depth of their courage but the limits of their friendship and the wisdom of the journey itself—Smaug.

In adapting “The Hobbit” into three fully rounded motion pictures, Jackson and his screenwriting collaborators Fran Walsh and Philippa Boyens, along with Guillermo del Toro, found they had the freedom to avoid having to cut or condense the narrative of the book while also incorporating the material from the 125 pages of appendices that Tolkien included at the end of “Lord of the Rings.”

With these extensive notes about the environment and politics of Middle-earth during the time of “The Hobbit,” Tolkien provided vital connective tissue between Bilbo Baggins’ journey and the ultimate struggle for Middle-earth chronicled in “The Lord of the Rings.”

“The world of Tolkien is so rich,” said Jackson, who won an Academy Award for best director for “The Lord of the Rings: The Return of the King.”

“It’s almost like you’re turning the page of a history book, going back into that world to a new chapter and seeing new characters, creatures and places that you haven’t been to before,” he pointed out.

“The Hobbit” trilogy presents an irresistible journey of their own: to fully explore the mysteries and dangers both hinted at and fully described in both the appendices and “The Hobbit,” while not compromising the tone of what was essentially written as a book for young people.

A production of New Line Cinema and Metro-Goldwyn-Mayer Pictures (MGM), “The Hobbit: The Desolation of Smaug,”  will be released in 3D, 2D and IMAX theaters in the Philippines by Warner Bros. Pictures on Dec. 11.