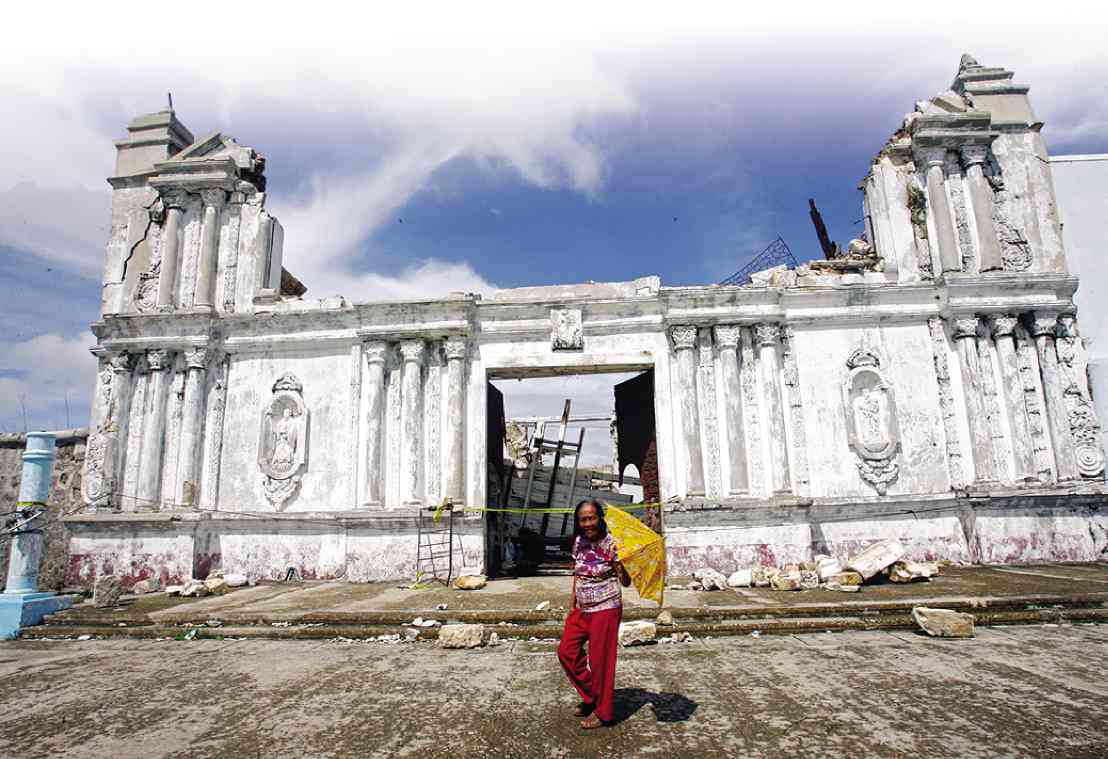 IMMACULATE Conception Church of Guiuan, Eastern Samar in the aftermath of ‘Yolanda.”

Heritage experts and culture-mappers are coming together to help rehabilitate and rebuild several heritage structures damaged by Supertyphoon “Yolanda,” notably the Church of the Immaculate Conception in Guiuan, Eastern Samar, one of the oldest churches in the country.

Ironically the church before Yolanda severely damaged it on Nov. 8 had been considered for inclusion on the World Heritage List of the United Nations Educational, Scientific and Cultural Organization (Unesco).

Eric B. Zerrudo, director of the Center for Conservation of Cultural Property and Environment in the Tropics (CCCPET) of the University of Santo Tomas (UST) Graduate School, said Guiuan and other damaged heritage structures must be inspected first.

“All previous studies have to be ready, including the detailed engineering study along with the inventory of the church.”

“A team has to be formed to assess the damage (3/4 of the church is damaged) while a site for the pastoral function of the people has to be identified.”

Zerrudo continued: “Things that need to be done include manual documentation; X-ray of the whole building; and a new detailed engineering study. This is for documentation purposes and checking of structural stability.

“This will also be the basis for the intervention needed on the church, may it be restoration, reconstruction, or redevelopment.”

“The church,” Zerrudo pointed out, “is well documented as a result of the cultural mapping project done in 2011.”

Ironically, Guiuan was among the case studies presented during the national cultural-mapping conference organized by the CCCPET of the UST Graduate School in late October, a few days before Yolanda.

During the conference, former Guiuan Mayor Annaliza Gonzales-Kwan said cultural mapping yielded voluminous data on the town’s natural, intangible, and built heritage that could be used for preservation, education, and tourism strategies and programs, including the creation of a municipal museum.

Kwan is the sister of Guiuan Mayor Christopher Gonzales.

She said the project “enabled us to identify natural attractions in each barangay (village) and it currently guides us in creating policies for its protection.”

“Cultural mapping has taught us to be more conscious of the vast cultural wealth that we have,” she said. “It gives us identity and pride of place. It reminds us of who we are. It is something that we have to pass on to our sons and daughters, as it had been passed on to us by our forefathers. Each of us has an inherent claim to our place, our heritage, and we have the obligation of preserving, safeguarding, promoting and strengthening it.”

During the conference, held at UST’s Thomas Aquinas Research Complex Auditorium, Guiuan was held up as an example for enlightened local leadership and cultural conservation.

But held days after the killer 7.5 magnitude earthquake on Oct. 15, which destroyed or severely damaged several ancient Catholic churches in Bohol, the mood of the conference was both hopeful and sad.

In another irony, award-winning film scorer Lutgardo Labad, the Bohol tourism officer who was abroad when the earthquake struck, was present in the UST conference. He had been scheduled to present the cultural-mapping experience of Bohol before the temblor.

Labad said the cultural mapping of Bohol started in 1998. He explained it had resulted in the development of cultural and tourism programs and their enhancement. It had also fostered cultural education and brought progress to the local economy.

“Perhaps the Lord has a reason why we were seemingly and intentionally moved out from Bohol during the time of this historic crisis,” he said about his absence during the earthquake. He explained he would have lost his wits if he had seen the ancient churches crumble.

“I might have sputtered out the names of those whose lives were snuffed out and the names of the churches, images, artworks, carvings, books, ceilings, pipe organs, belfries, watchtowers, walls, façades, sculptures, retablo, that were so dear to my heart ever since my beloved mother brought me back to Bohol,” he said He added all of them “now (are) unrecognizable amid the debris—a cultural heritage which fellow artists and cultural workers in Bohol and in the country took pains to preserve and revitalize in the last 17 years.”

The two-day cultural-mapping conference was organized to mark the UST CCPET’s 10th anniversary. It discussed the various mapping practices and how they contributed to community development, especially now that there is a growing interest among local government units to fuse heritage with development.

Zerrudo, UST CCCPET director, said the conference sought to share cultural-mapping experiences of local governments and create a network of cultural mappers among the academe, cultural organizations, and government offices, and to inspire local communities to begin their heritage resource listing and documentation.

Speakers came from all over the country, from Australia and Thailand.

Mayor Eva Marie S. Medina of the Heritage City of Vigan served as the plenary speaker. She discussed how her city won the Best Cultural Conservation Practices award from the Unesco.

She said that the documentation of the city’s tangible and intangible heritage provided a strong foundation for the city’s conservation efforts.

Through cultural mapping, she said, Vigan has been able to come up with the Heritage River Cruise on Mestizo River; the Buridek Children’s Museum; the renovation of a four-story ancestral house on Crisologo Street, which will be developed as Vigan’s product display and promotions center; and the construction of the the Vigan Conservation Complex.

The latter, said Medina, will have an arts-and-crafts training center; two museums; a repository of documents; a depot for conservation materials; and a product development center.

“Vigan continues to be a vibrant center for trade while at the same time its precolonial industries provide livelihood and employment to the residents,” Medina said.

He said collaborating on the project were the National Museum; the City Government of Butuan; and UST’s graduate program on Cultural Heritage Studies and CCCPET. He added that from the mapping project, a tourism development plan was formulated, highlighting Butuan’s outstanding heritage.

Batoon revealed the National Museum was preparing a proposal to add the Balanghay/Butuan Boat sites on the Unesco’s World Heritage list.

Fernando Nakpil-Zialcita talked about the Ateneo Cultural Laboratory (ACL), which he said was an effective way of teaching social science concepts and methods and enables students to see the connection between research and application.

“The academic cores of the ACL are two courses taught intensively for one week on the Ateneo campus both in the morning and afternoon,” Zialcita said. “The remaining 2½ are used for intensive research in a locality off-campus by teams to be supervised by the faculty involved.”

She said the project created employment opportunities through sustainable heritage programs such as lantern skills training for unemployed single mothers, out-of-school youth and persons with disabilities.

This program, said Nicart, is designed for teachers so they can “expand their knowledge base in Philippine history and cultural heritage, providing them with hands-on opportunities for critical dialogue with local culture and the arts.”

He said safeguarding ICH presupposed its inventory. There’s also a need to involve communities in safeguarding and managing ICH, he added.

Al Modesto Valenciano of the Gameng Foundation, Ilocos Norte, discussed cultural mapping as a tool to ensure the sustainability of community museums and their programs. He cited in particular the experience of Museo Ilocos Norte in Laoag.

Harley Rose A. Daquioag, director of the Aurora Pacific Economic Zone and Freeport Authority, talked about the cultural mapping of Casiguran, Aurora.

Launched during the UST conference was “A Contemporary Guide to Cultural Mapping: An Asean-Australia Perspective,” by Ian Cook and Ken Taylor of AusHeritage Limited.

Also launched was “Kahoy: Wood in the Philippines (Wood and Its Uses fron Pre-Hispanic to Spanish Colonial Philippines),” by Cheek S. Fadriquela.

Culminating the event was a special off-the-beaten-track tour of Binondo by well-known tour guide Ivan Man Dy of the Old Manila Walks, and Anson Yu and Nelson Ty.

Participants said they found the conference energizing and inspiring. They vowed to go back to their local communities to advance heritage conservation.

They said they agreed with Mayor Kwan that cultural mapping “has, indeed, given everyone identity and pride of place,” which should embolden “everybody in helping preserve, safeguard, promote, and strengthen” cultural heritage.”