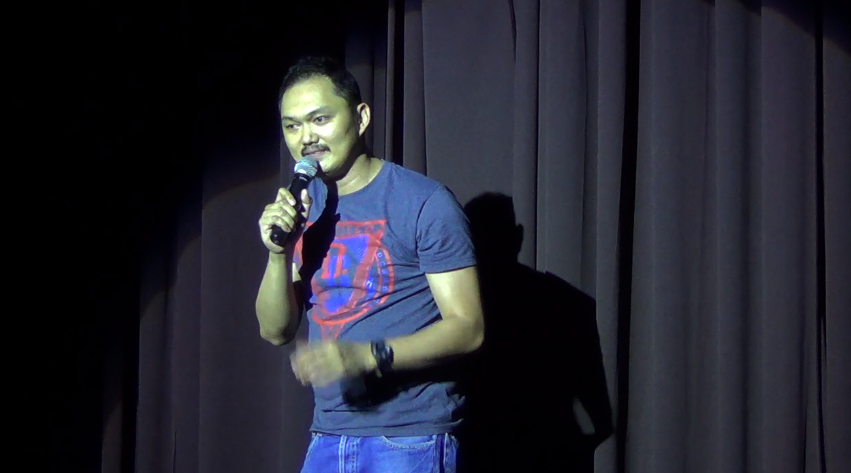 Malaysian comedians with their Filipino counterparts had everyone in the audience in stitches during the  “United in Laughter”show held Monday night in Makati City. Video by Nestor Corrales/INQUIRER.net

Now the group is taking the baby steps toward their dream with the help from some like-minded Malaysians.

Comedy Manila, a three-month-old stand-up comedy group, brought in Malaysian stand-up comedians from Malaysia to the Greenbelt Cinema in Makati City on Monday evening for “United in Laughter,” a show with the purpose of changing stand-up comedy in the Philippines

“With what I saw tonight with those people who came in, it’s going to get bigger,” said Comedy Manila co-founder GB Labrador. “With the support we are getting right now, we just have to keep getting better as comedians and  I’m excited to see what comedy brings us.”

Neeman, who hosted the event, said that his group is looking to use United in Laughter as a springboard for bigger shows with other Asian comedians.

“Comedy is booming here in Asia and we are looking to make it better,” Neeman said.

“We all laugh as loud as long as the target is white people, because we (Malaysians and Filipinos) were both colonized,” said Van Geyzel. “They laugh just as loud as in Malaysia.”

Labrador said that the decision to bring in Malaysian comedians was a no-brainer since they are “very close with our culture.”

“The traditions are the same with the traditions that we do,” Labrador said pointing out how Filipinos hail taxis where passengers have to say the destination first before sitting down inside are similar with Malaysians.

“I wanted our audience to see that comedy is about relating to everyone about day to day lives, we have the same problems, and we laugh at the same things.”

Calleja, a full-time head writer in ABS-CBN, said that the beginning of stand-up comedy in the Philippines was not all fun and games.

“There were plans before about two years ago (with another group) where we would sell tickets and the posters were already printed but just before the event we had to cancel it,” Calleja said, recounting the rough times Philippine stand-up comedy experienced.

The veteran comedian said that United in Laughter was the first where it sold tickets and held in a large cinema since most of their shows were always at corporate events and bars.

“What Comedy Manila did here, is just the beginning, these are just baby steps,” Netto said.

“It was a dream that we have while we were planning this,” Labrador said. “It was just how I pictured it.”