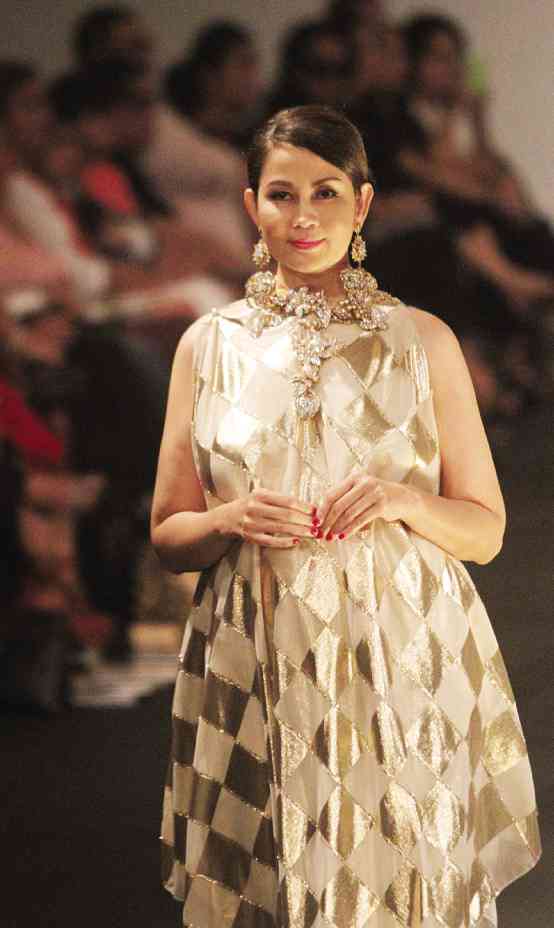 The year to honor ‘Mang Ben’

His life’s work has compelled us to bestow on him loving and reverent names. But in the past 50 years, the most resounding of these titles has been

“The Dean of Philippine Fashion.” That accolade speaks of timelessness, sophistication, culture, nostalgia and perfectionism.

Since the start of his career in the mid-1950s, Ben Farrales, most commonly known as “Mang Ben,” has continually satisfied generations of clients, organized benefit shows to lift the morale of the Filipino people, and established one of the biggest religious-civic groups, the Congregacion del Santisimo Nombre del Niño Jesus, which helps propagate the Filipinos’ devotion to the Child Jesus.

He has always seemed daunting at first, but, in time, one finds him to be very engaging; strict but rational; uncompromising but just; meticulous but very appreciative. But mostly he’s a dedicated friend, a caring mentor, and forerunner in championing our culture, bringing pride to our country through his designs that blend the indigenous and the Western.

The finale show of the recent Philippine Fashion Week celebrated Mang Ben. The event, simply titled “Ben Farrales: A Retrospective,” was a meeting of generations young and old, showcasing the designer’s ageless silhouettes and fashion aesthetic. The audience’s unending cheers and standing ovation even before he could come out at curtain call were deeply touching—a heartfelt reminder of how well-loved and respected Mang Ben is.

Aided by close friends, director Ogee Atos and designer Anthony “Tonichi” Nocom, Mang Ben walked on the ramp and waved at a teary-eyed crowd. Joey and Audie Espino of Runway Productions joined him up front in a finale shot that will be remembered for years to come.

Left awestruck by this image, I asked my co-señoras (as our batch of fashion models is called in the industry) about their first meeting, or unforgettable experience with Mang Ben. This

might give a clearer idea of how The Dean was behind the scenes.

Celine Magat-Lopez:  “Each piece of his collection was made with love by Mang Ben and his staff has remained loyal all these years. The intricately embellished, heavily beaded kaftans, which weigh a ton, are the most challenging ones [to model] especially in the ’80s when modeling required us to pirouette up to five times.”

Desiree Verdadero-Abesamis: “I was a budding model when Renee Salud brought me to watch Mang Ben’s cocktail show at Manila Hotel. I was in awe watching his collection—until I saw him screaming at one of the models for wearing black stockings with white shoes!”

Tweetie de Leon-Gonzalez: “He was a father figure to many in the industry and molded my generation’s values and ethics. He was strict, as he should be, which instilled discipline among the upstarts, who, in turn, are now passing on the sense of professionalism to the younger players in the industry.”

Annette Coronel: “I did Mang Ben’s shows for 20 years starting in the mid-’80s, many of which were charity shows for calamity victims. He has a kind heart and loved the Filipinos so much.”

Mellany Carlos: “A good model-friend and I got a mean scolding from him in front of other models because of what he thought was naughty behavior during a ‘Moda Maynila’ show. We always have a good laugh every time we talk about it!”

Patty Betita: “The finale number played ‘My Way’ and ‘O Sole Mio,’ Mang Ben’s favorite songs. Seeing him come out to an SRO crowd brought tears to my eyes. I will cherish that moment forever.”

Selina Manalad: “Mang Ben is a beautiful person, inside and out. He is intelligent, hardworking and dutiful. I love him so much.”

Lou Bunyi-Pareja: “Mang Ben has always been a man for others. He always sought to entertain his audience and make people happy.”

May Nadayag-Stone: “From the time I started modeling, I saw how everyone—models, designers, makeup artists— have always held him in high regard. The respect he has gained over the years was, I think, the reason people look up to him.”

JP Abinuman-Cox: “Walking for the Dean of Philippine Fashion and alongside the country’s best ramp models was an honor; it was surreal and magical. I remember Mang Ben in one show, when he didn’t like a model; so he asked the director to pay that model not to wear his clothes! He is truly a man of no compromise!”

Director Ogee Atos recalls the conversation he had with Mang Ben the morning after the show: “He called me early morning to thank me, that he owes me one. I said I’m the one who owes him a lot. Hearing his words of gratitude is enough validation for me as a director. I told him it was through the effort of Joey and Audie Espino and the Runway group that it all became a reality, that the industry loves him, and that he is a great designer.

“He then commented that Gerry Sunga’s jewelry was beautiful. I told him Gerry did it because he loves him, too. Then Mang Ben whispered, ‘I thank God for helping me create beautiful clothes. I thank Gerry for making it more beautiful. The girls were beautiful.’

“Lastly, he said, ‘I can now put all my clothes to rest … till the next show!’

We all dream of times like these—that we be honored and remembered for the legacy we leave. Mang Ben is not known as a pillar of fashion for nothing. For five decades, he strived unceasingly, and adhered to his principles of beauty, generosity and care for Philippine culture.

The standing ovation and cheers he received at curtain call will not be enough to express our gratitude and love for this great man.