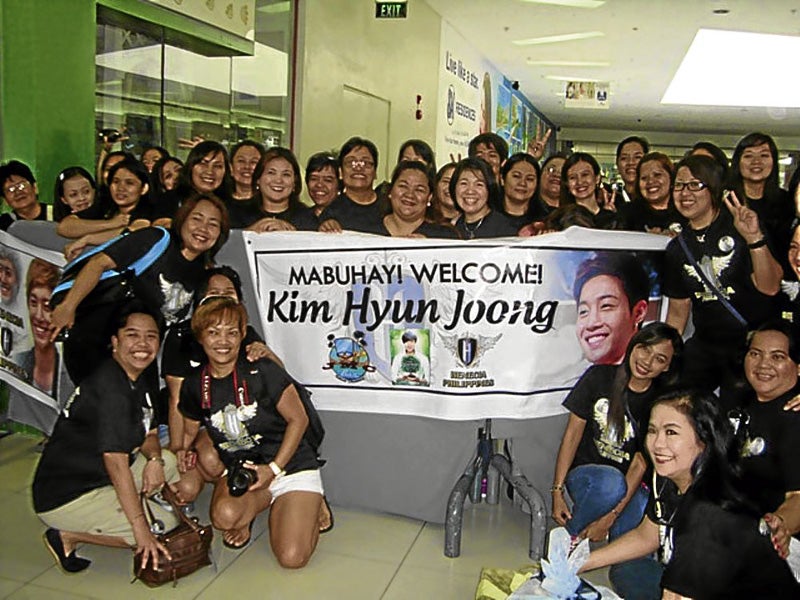 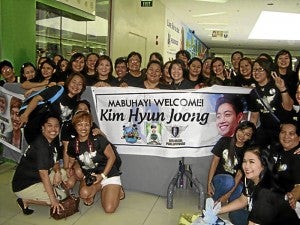 Kim Hyun Joong was in Manila for only about 48 hours, from August 25 to 27, to promote his “Breakdown Album,” which is being distributed locally by PolyEast Records, and to participate in a series of events for The Face Shop, the beauty shop chain that he endorses.

Although he only stayed for two days, the members of his official fan club, Henecia Philippines, got busy preparing  almost a month before his arrival.  I was a witness to how a group of dedicated fan-girls devoted their time, money, and effort in support of this Hallyu star with finely chiseled features and an eccentric and fun personality, never mind that he hardly speaks English.

According to Nadia Gaurano, president of the fan club, they became ecstatic upon hearing the news that he would be including the country in his Asia Tour. “As soon as we learned that he was coming, we got down to business. Since this is his first official visit as a solo artist, we wanted to make sure that everything would go well and that he would be happy with the results,” she said.

The Fan Club members, most of whom are professionals and students, listed the tasks at hand and assigned individuals and teams  responsible for designing and printing  Henecia Philippines T-shirts, coordinating with members, buying gifts for Hyun Joong and his staff at Keyeast, his 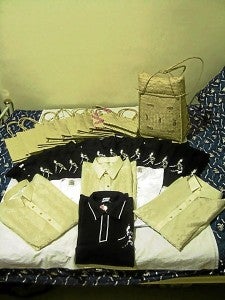 management company, and renting a double-decker bus to transport fans to and from the different venues of his activities, among many others.

Two of the members, Lyn Esguerra and Grace Aldeguer, worked closely with The Face Shop to organize the auction of Hyun Joong’s sports shorts, proceeds of which went to the Abiertas House of Friendship, a non-profit organization that supports unwed mothers. Both Kim Hyun Joong and Henecia Philippines have supported the organization in the past. The two also helped organize the autograph-signing session at the Trinoma Activity Center.

Asked why she did it despite the hard work and sleepless nights, Aldeguer said it was the most she could do for the guy who has entertained her, and has indirectly, introduced her to a group of new friends who have since become like family to her.  She also considered it an opportunity to be a part of an undertaking to help the underprivileged.

Kathy Delera, owner of Kathy’s Bench (kathysbench.blogspot.com), a blog site dedicated to the Korean actor and singer, got busy posting articles to promote the visit. She and a few others used their blogs, Facebook, Twitter, and almost all kinds of social media networks to let everyone know of Hyun Joong’s visit.

As if all these activities weren’t crazy enough, the group got an email from the production staff of “Kapuso Mo, Jessica Soho,” asking if they can cover their activities. They said they learned about Henecia Philippines after calling the Keyeast office in Korea. So, Kathy, together with twins Lyd and Liz Pedernal, ended up being interviewed on TV about their fascination for this man whose popularity as a solo artist skyrocketed after appearing as Jihoo in the hit series “Boys Over Flowers.”

On the day of Hyun Joong’s arrival, a big group of Henecians went to the airport as early as 9 am to welcome him. They were all 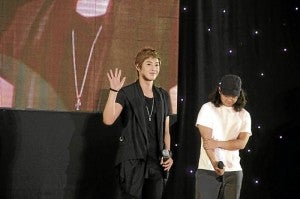 dressed in white Fan Club shirts, and held big welcome banners and white and silver balloons. They also prepared a bouquet of flowers for him.

As with most airport arrival scenes, the scene was very fleeting, and before they knew it he was already being whisked away to his hotel. But a glimpse of the smiling superstar was enough to keep everyone’s energy up the whole day.

Next stop for Kathy and her small group was the PolyEast Press Conference at the Edsa Shangri-La hotel.  He was at the press conference for less than 15 minutes, but it was enough to mesmerize all the fan girls and fan boys in the audience. Yes, he was flawlessly handsome, but what endeared him to both fans and nonfans the most was his attentiveness. One look and you could tell the guy was no diva.

Meanwhile, the rest of the group proceeded to the Trinoma Activity Center for the High-Five Touch Event. The Japanese and Koreans have been holding events like this for stars, with gazillions of fans. Fans are given the opportunity to give their idols hi-fives, a less taxing and time-consuming activity than signing autographs.

The events on the 27th started with the Fan Club officers serving as marshals when Hyun Joong visited the Mall of Asia branch of The Face Shop. It was a short 10-minute visit, but the screams of the fans upon seeing him up close were enough to numb one’s eardrums. 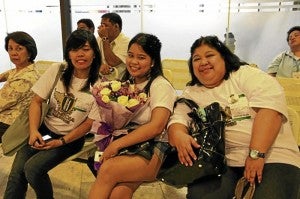 No doubt everyone went there to see Kim Hyun Joong. But the screams did not start only upon his arrival. They started as soon as his bodyguard arrived to check the venue. Few can refute that Mr. Jeong is the hottest bodyguard from the land of Kimchi. He stands about 6’3”, and his skin doesn’t have visible pores. He makes you wonder whether, just like his boss, he uses BB Cream too before he steps out in public. Hyun Joong’s fans have been photographing him and mentioning him in their fan accounts. He even has his own FB fan page!

KHJ spent the rest of the afternoon at the Face Shop Press Conference at Rockwell. During the event, proceeds of the auction amounting to P100,000 was handed over to Abiertas. The winning bidder was Patria Ragasa, a 74-year-old avid fan of Hyun Joong.  Ben Chan, whose company owns the local franchise of The Face Shop, was so moved and inspired by Hyun Joong’s generosity that he decided to donate another P500,000 to the organization.

This made Grace and Lyn cry. Finally, all their efforts were rewarded by something concrete. The appreciation and gratitude extended by The Face Shop and Keyeast was just a big bonus. After the media event, he proceeded to the autograph signing event at the Trinoma. His fans were surprisingly well-behaved, while Hyun Joong was visibly in a good mood.

At the end of the second day, the fan club members were exhausted but happy. And despite all the hardships, they are already looking forward to Kim Hyun Joong’s much-anticipated concert tour starting in December. Hopefully, he’ll be back to do a concert here early next year.