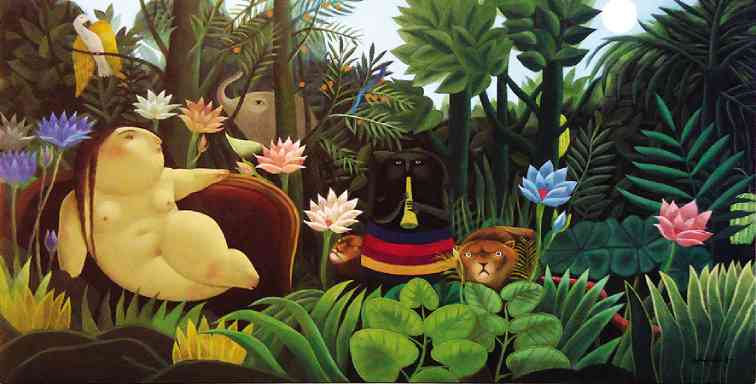 “HOMAGE to Henri Rousseau, The Dream”

Roel Obemio: Under the Influence

Roel Obemio shows the influences that affected his art-making in “Homage,” running at Gallery Francesca until Dec. 18.

“Homage,” is the artist’s sincere and heartfelt tribute to master artists that have shaped the art world as we know it.

Iconic images flood the visual consciousness of Obemio. The choices are personal, reflecting his sources of inspiration both from local and international artists.

Classicists, realists, surrealists, cubists, expressionists, impressionists, all artists of all manners have been rendered, with respect, in Obemio’s signature thoughtful and playful manner.

Indeed, Obemio is under the influence, not by mere wine, or mind-altering drugs, but by the intoxicating sensations of great art; art that serves not simply to be admired, but which stun viewers to silence.

Obemio’s brilliance shines in the subtlety of his details as well as his ever amusing and lighthearted trademark figures.

Obemio in his mesmerizing magical mannerism has brought to life artworks that make art fun.