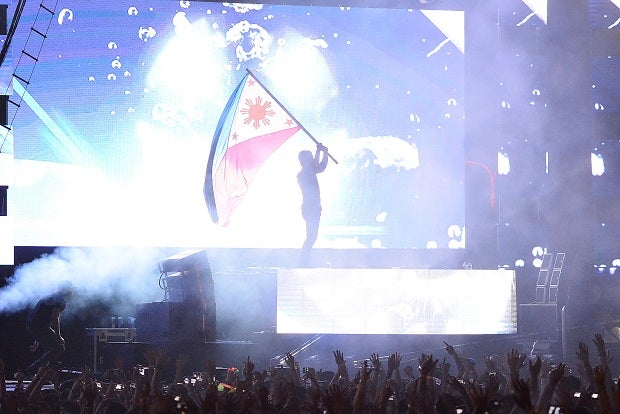 United Republiq, Viber give back to ‘Yolanda’ victims

MANILA, Philippines—Over 8000 people supported Viber’s Fund Raiser Festival United Republiq: An Electronic Music Assembly For A Cause at the Mall of Asia Concert Grounds last November 21. All proceeds from the event were donated to the World Vision Foundation.

United Republiq’s goal was to show the world that in the midst of adversity, the Filipino spirit is strongest when united as one through music. The festival’s headliners Axwell, Nicky Romero, and NO_ID donated their talent fees in support of the endeavor.

Over P7,000,000 was donated from the collective efforts of the international artists, local DJs, producers, the event’s suppliers and of course from the support of everyone who attended.

Nicky Romero, a Dutch DJ ranked #7 in the world, expressed his feelings about the calamity right after his set.

“It’s so sad that these things happen and the thing is, it’s always at the places where people are the poorest. So I just feel horrible for everything that happened in your country and all the families and the people that suffered from the typhoon,” said Romero.

At the same time Romero said he was happy about the world’s efforts in helping the Philippines saying that it’s “really heartwarming to see that the entire world is helping your country out.”

The main star of the show Axwell, the superstar DJ who was part of the Grammy award winning dance music trio the Swedish House Mafia exclaimed: “I love you guys! I loved it here so much the last time and I really wanted to come back. The devastation is nothing like I’ve ever seen before. I only saw it on TV but you guys lived it. I’m just happy that we could still do the show here, so happy that we can change the whole vibe into a charity show and give all the money to the victims and hope that it helps the people.”

Viber salutes everyone who contributed to Typhoon Yolanda relief efforts and hopes that through this #ViberHELPS event, more relief and rebuild efforts can be carried out. To everyone who wishes to learn more about supporting #ViberHELPS, follow @Viber_PH, or visit www.viber.com/typhoon