Made in Marikina? Not when the city is losing its shoemakers | Lifestyle.INQ ❮ ❯ 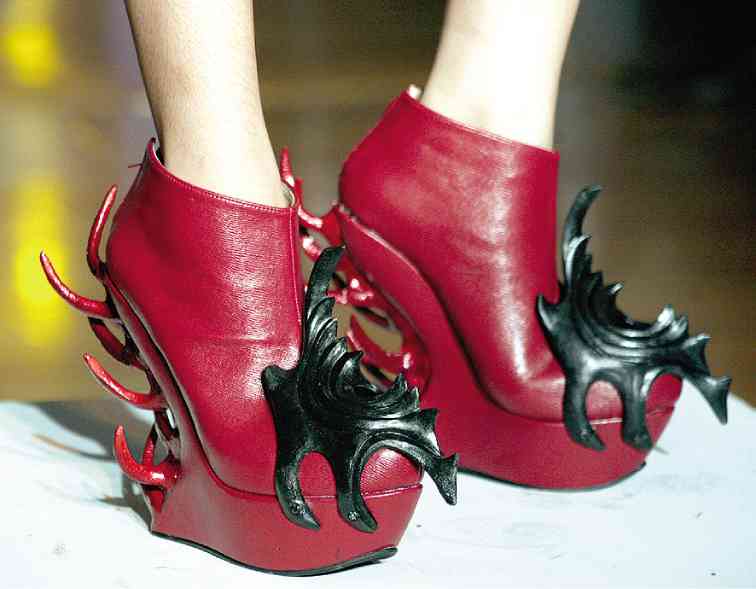 Made in Marikina? Not when the city is losing its shoemakers

If the “Shoe Capital of the Philippines” doesn’t train a new breed of skilled shoemakers, its title might soon become nothing but mere nostalgia.

The city government of Marikina held a benefit dinner last month to raise funds for a proposed Sapatero Scholarship Fund, with a vision to save the city’s once-thriving industry.

The youngest shoemakers in Marikina are well in their 50s, according to Brian Tenorio.

The Pratt Institute-educated shoe designer and a resident of the city collaborated with Marikina’s tourism office to mount the benefit dinner in lieu of the usual mall show to celebrate the annual Sapatos Festival.

Shoemaking was once a skill passed down through generations, but “the tradition is gone,” laments Tenorio, who returned to the country after living for some time in New York, and has

relaunched his eponymous brand. “My last shoemaker in 2008 is now gone.”

Imports have flooded the local market, and even brands that used to sell only local footwear, now also sell largely China-made shoes.

From a peak of 3,000 to 4,000 shoe manufacturers, there are only about 150 left, according to Tet Atanacio Curry, Marikina City tourism officer. The remaining few continue to make shoes for their own brands, or subcontract for department stores or other local shops. Others survive on a consignment basis.

If you walk around Marikina today, you might still find a few shoemakers selling their handcrafted shoes, Curry says. But it’s “unlike before where there were shoes being sold on every street, sa mga silong-silong.”

The industry has lost out to China as producing shoes here is more expensive owing to overhead costs.

“What’s sad is that, in Divisoria, they sell shoes that they claim to be made in Marikina but are actually from China,” says Curry.

But isn’t that a good thing, as it implies the “Made in Marikina” stamp still has market appeal?

No, says Curry. “The China imports are inferior in quality, they don’t last, and this is damaging to the reputation of our shoemakers. We want to rectify that.”

While local manufacturers are struggling, with many relying merely on the shoe caravan—an activity that allows them to sell their wares in other municipalities around Metro Manila—the city is bent on keeping its legacy, thus the efforts to lift the morale of its shoemakers.

The city provides benefits like tax incentives, says Curry, noting that some manufacturers have chosen to relocate to nearby towns where taxes are lower. Marikina is also helping them promote their products.

Apart from the shoe caravan, they’ve also set up a shoe trade center where manufacturers can sell their wares, both retail and wholesale.

“It’s a small setup for now, but we want to make it bigger,” she adds.

Shoemaking is one of those fashionable and romanticized careers, Tenorio notes.

“But it’s not a one-person job. You need a setup. There are a lot of designers, but the craft of shoemaking is very technical.”

Sketching a design is just one part of the process. “We also need to increase awareness for aesthetics and design. It has to be of high quality. You will notice that what you’ll see out there, kung hindi baduy, kinopya.”

Tenorio, who sells to a higher-end market, has different manufacturers doing phases of his shoes, to protect the design. His label carries the stamp “Made By Marikina.”

The goal is to teach via apprenticeships, says Curry.

For the benefit dinner—held aptly at Kapitan Moy, the ancestral house where Don Laureano “Kapitan Moy” Guevara created the first pair of Marikina shoes in 1887—Tenorio invited six other designers, and paired them up with manufacturers to bring their designs to life.

Tickets were sold for the dinner show. Then Supertyphoon “Yolanda” happened. They failed to raise their target figure.

Instead of getting dismayed, Tenorio and company decided to sell select pairs from the show to raise aid funds for the typhoon victims.

“Marikeños can empathize with the victims,” he says. “We suffered, too, during Typhoon ‘Ondoy.’”

The Marikina SOS Shoes on Sale for Supertyphoon Yolanda can be found on ava.ph, with the shoes selling from P3,500 to P38,888 a pair. Proceeds will be turned over to Unicef Philippines.