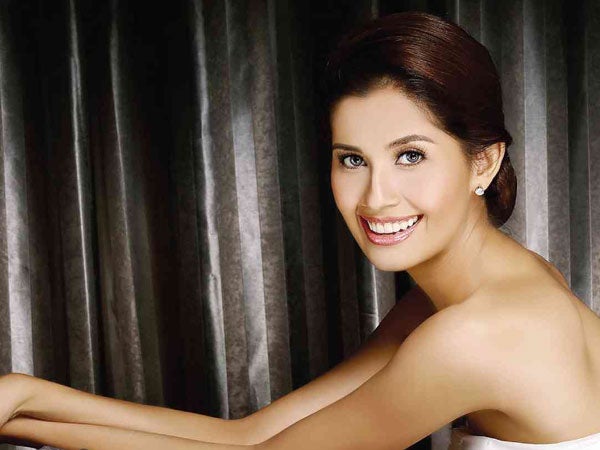 The countdown to Shamcey’s wedding begins

As her altar date with Filipino-Chinese businessman Lloyd Lee draws nearer, architect-turned-beauty queen Shamcey Supsup’s biggest fear now is not getting enough sleep the night before the big day.

“I’m always like that before a big event,” Supsup tells lifestyle media at designer Cherry Veric’s shop in Malate. “Even when I was younger, whenever there was a big exam or field trip, I couldn’t sleep no matter how tired I was.”

Two years ago, she went through the same “ordeal” the night before Miss Universe in Sao Paulo, Brazil. But she apparently managed to impress the judges and  ended up third runner-up to Miss Angola.

“I’m afraid to take sleeping pills because I might not be able to wake up on time,” says Supsup.

She will exchange “I do’s” with Lee on the afternoon of Dec. 29 at the Church of the Risen Lord in Diliman, Quezon City. “I know how important it is to look fresh and rested on that day.”

That’s why it’s timely that Supsup, who has parlayed her popularity into a hosting career, now that she has her own interior design show, has agreed to be Facial Care Centre’s endorser.

“I was advised by Albert Kurniawan, the person who’s doing my makeup, to allow my skin and lips to rest,” she says. “The constant makeup has already taken a toll on my skin and my chapping lips.”

The procedure is also said to help prevent skin breakouts.

Supsup can’t help being stressed out, given the details she has to look into. The couple has to accommodate 1,200 guests in two of Edsa Shangri-La’s ballrooms. Most of the guests, she said, are friends of their parents.

“Lloyd’s dad was responsible for choosing the food. Dishes will be served lauriat-style. The Chinese are very particular about what you serve because to them a wedding’s success depends

a great deal on the food.”

Since the couple can’t be in two places at once, they will do live video feeds. Each venue will also have a host to liven things up. Supsup is keeping her fingers crossed that the plan, which they hatched with wedding planner Christine Ong-Te, would work.

Instead of getting souvenirs at the end of the reception, guests will receive coasters with a lace motif as they register. Each giveaway will also indicate the guest’s table assignment.

No one would feel less important, she assured, as they’re placing their close friends in the smaller ballroom, which also serves as after-party venue. Their parents’ guests and relatives, who are usually among the first people to leave, will be in the grand ballroom.

“I feel excited and anxious. I haven’t been getting enough sleep for two weeks now. We all know how stress can affect the skin in so many ways,” she says.

Supsup probably won’t need to undergo painful waxing procedures to remove unwanted body hair. After going through several sessions of LaserLight, she noticed that her body hair has become finer and less visible.

“When I started joining pageants, they said I looked like a monkey because I was so balbon (hirsute),” she says. “So, I would wax everything off as often as I could—whole body. It was painful!”

But the pressure she felt preparing for Miss Universe was totally different from what she’s feeling now.

“This one is a happy event,” she says. “While in Miss Universe, I still had to compete, this time, I’m already a winner. The prize is already there. There are no judges to impress here. It’s just me, my future husband and God.”

She has kept her body-hugging wedding gown a secret from the public, except for her mother and fiancé.

“I’m pretty sure not everyone would agree with the design, especially those who are a bit older than us,” she says with a chuckle. “So, I decided not to tell other people too much, especially Lloyd’s dad. He might ask us to change it.”

Months ago, she and Lee had to tell his father the bad news that Supsup had lost her wedding ring in an event in Nueva Ecija. Since she had already started to lose weight, the ring must have slipped off her finger after all the waving and handshaking.

In keeping with Chinese tradition, she and Lee earlier exchanged wedding rings at a ceremony that also doubled as engagement party.

“It wasn’t a tradition to wear the wedding ring even before the wedding,” she says. “I just thought of wearing it. Lloyd’s dad was mad not because I lost it, but because it took some time for us to summon enough courage to tell him.”

To cut a long story short, the wedding ring was replaced with a smaller, less expensive one that fit Supsup’s delicate ring finger better.

Supsup and Veric collaborated on a Chantilly lace gown with fitted bodice and classic fishtail skirt for the ceremony. Francis Libiran will do Supsup’s gown for the reception.

“We’re both not into floaty gowns and froufrou,” says Veric. “Since my lines are simple, Shamcey’s gown will be all about shape.”

After Supsup requested Veric to do something similar to the gown she wore in the Miss Universe pageant, the designer decided to do a tastefully designed see-through number showing off part of the bride’s legs. Up to what part?

“Secret,” Supsup says with girlish delight. “I guess enough for me not to be sent out of the church.”

Lined with nude-colored fabric similar to Supsup’s skin tone, the sleeves and bodice give the illusion that nothing comes between her and the lace gown.

To give the gown texture and visual punch, Veric embellished it with appliques as well as white opals and crystals. He then provided shoe designer Nereku the same lace material to fashion a pair of five-inch platforms for the bride.

“I will wear a different, more glittery pair of shoes also by Nereku during the reception, to match my gown,” she says.

Veric and cake designer Emily Uy find Supsup easy to deal with. They attribute this to the fact that being professional herself (Supsup topped the architecture board exam before joining Binibining Pilipinas), she already had a clear idea of what she wanted.

“I didn’t have to spread out all my designs for her to choose from,” says Uy. “I needed only to tweak her ideas and make suggestions, which she was open to.”

Supsup originally wanted a small, single-layer wedding cake without the frills. When Uy told her that it might not work for a big Chinese wedding with more than a thousand guests, the bride came back the next time with a visual peg she downloaded from the Internet.

“This time, she got it,” says Uy. “I will do a cake similar to what she wants: a shimmery, five-layer pearlized fondant cake covered with big petals made of gum paste. It will be all white with hints of shiny crystals.”

Only the bottom layer, a surprisingly soft and tasty cake flavored with carrots and walnuts, is edible. Uy brought cupcake versions of her masterpiece for media to sample.

“Shamcey and Lloyd were the ones who chose the flavor,” she says. “I learned that carrot walnut is Lloyd’s favorite.”

What the couple is really looking forward to, says Supsup, is the week after the wedding when they fly to General Santos City, where the bride and her family hail from, to host a more informal party for friends and relatives who couldn’t make it to Manila.

“After the wedding here, we have a more laid-back, vacation-type reception in GenSan,” she says. “I’m not saying that I’m not enjoying the process here, but a lot of people have their own ideas of what a wedding should be. They feel that it’s also their event. It won’t be like that in GenSan anymore.”