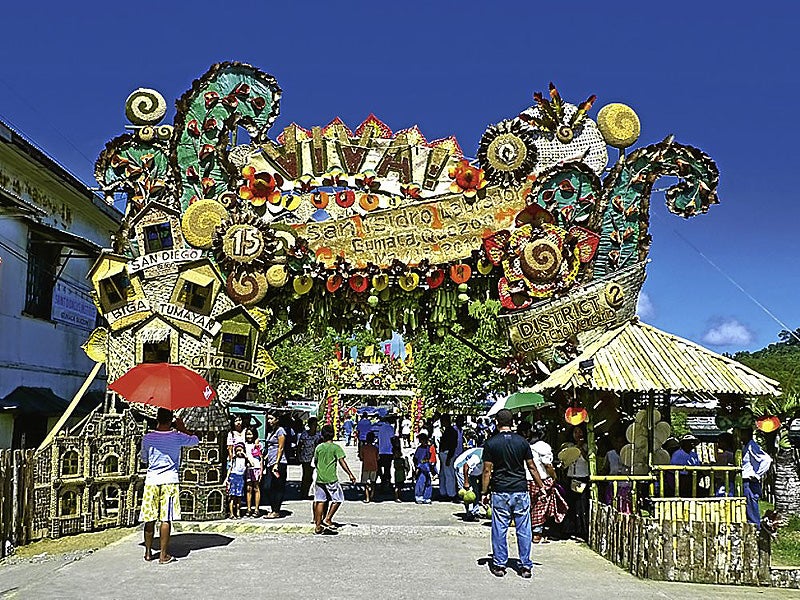 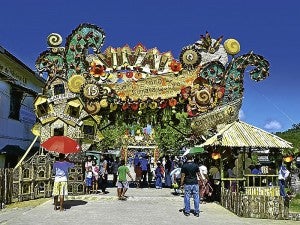 In May, parishes in different parts of the country pay homage to St. Isidore, patron saint of farmers, peasants, day laborers and rural communities.  In Quezon alone, carabaos kneel before the church in Pulilan, Colorful kiping decorate homes in Lucban, and goodies are showered on people in Agdangan. 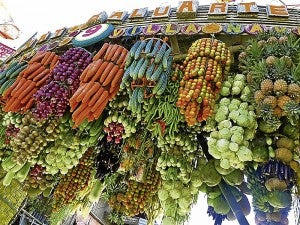 In Gumaca, one of the oldest towns in the country, the people show their gratitude for the bounty of the land by building big bamboo arches called baluarte and decorating these with chandeliers made of bamboo, then adorned with their own harvests and other embellishments called araña.

This is the Araña at Baluarte Festival, probably one of the merriest and grandest fiestas in honor of St. Isidore.

The baluartes are erected strategically along the procession route, with barangays or a cluster of barangays sponsoring a baluarte each.

Merriments start Saturday night with the “Gimikan” and “Yubakan,” a competition among barangays on the best yubak and street dance. A traditional Gumaca delicacy, yubak is made of cassava or saba mashed with coconut, peanut butter, sugar and milk.  Guests move from one baluarte to another to taste the yubak and see the youth perform their dance moves, with everything including the chairs and sound system mobile so the party hops from one baluarte to another. 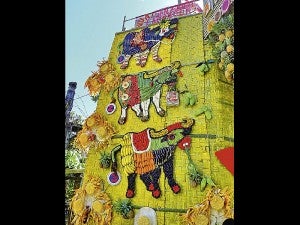 This year, Barangay Rizal won the dance competition with its modern take on the folk dance, its dancers dressed as scarecrows. District 1, meanwhile, won in the best yubak.

The baluartes were already filled to the brim with local produce, but the competitors still had a lot more in store as, the following morning, the baluarte became even grander with more decor added. Each had its own gimmick, costumes and delicacies to attract visitors. 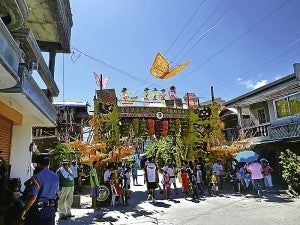 The best baluarte was awarded to District 2, which came up with a very intricate design. Second place went to when past winner Villanava, which added puppetry to its baluarte.  The third place was awarded to District 6, whose baluarte was inspired by Gumaca’s popular landmark, the San Diego de Alcala Fortress, built during the 18th century to thwart sea pirates from attacking the town.

Another tradition is the pamamasyal, where local officials, townspeople and members of society clad in their colorful 20th-century fashion visit the fort and the baluartes.

A mass followed the pamamasyal and a procession right after, which was the highlight of the festivities. After the image of San Isidro passed under the baluartes, the arañas and other hanging decor of fruits and vegetables were cut loose for the revelers to partake of. Townspeople came ready with sacks to fill.

The activities culminated with the crowning of Ms Araña and the awarding of prizes.

Amid all the festivities, what was not lost among the people of Gumaca was their genuine effort to honor their patron saint, as well as their pride in the harvest and bounty of their land.