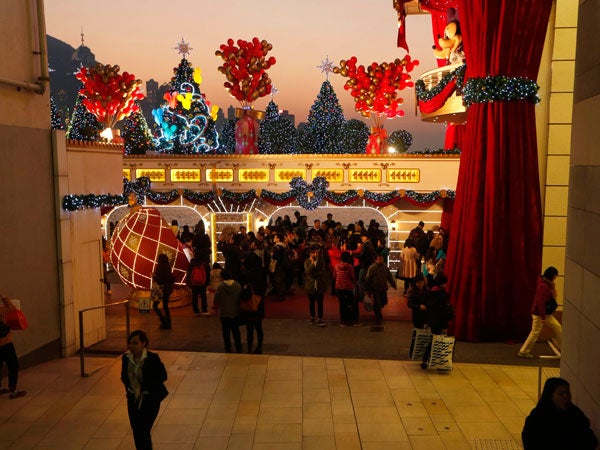 Christmas decorations are displayed to celebrate the holiday season at a shopping mall in Hong Kong, Thursday, Dec. 19, 2013. AP

Battle of the Christmas decorations for Hong Kong malls

HONG KONG – In the race to extract cash from Christmas shoppers, Hong Kong’s myriad shopping malls have taken to heart the maxim that you must spend money to make money when it comes to decorations this festive season.

From two-storey-high polar bears to giant Disney characters, the southern Chinese city is awash with increasingly elaborate displays as luxury outlets bid to outdo each other and get wealthy mainlanders through the door.

Harbour City spent more than HK$5.0 million ($645,000) this year on a display that includes Disney characters from popular movies such as “Toy Story” and “Lilo and Stitch” placed among huge Christmas decorations.

Tam said the mall’s budget will only increase in coming years, as it vies with its rivals to boost Christmas footfall and snare as many local and tourist shoppers as possible.

“The budget for Christmas decorations has to go up because it is really serious competition in Hong Kong and China,” Tam said. “We have to be creative, we have to bring in new elements, we have to attract people’s eyeballs.”

The IFC Mall, located in the city’s Central financial district, has set up decorations inspired by New York City’s Central Park, with grassy knolls and stationary bicycles that light up when shoppers climb on and pedal.

Malls have kept their holiday designs – and their budgets – a closely guarded secret until the last possible minute, adding to the pressure on those responsible for the over-the-top displays.

“We had tried to check what the other malls are doing for the season, but everyone keeps it all very confidential,” said Rebecca Woo, head of marketing at K11 Art Mall.

K11, which doubles as a shopping mall and an art gallery in the tourist hotspot of Tsim Sha Tsui, had an environmental twist on this year’s festive installation which was six months in the planning and costing HK$4.0 million ($516,000).

The mall opted for a two-storey tall polar bear made of steel pipes, accentuated with multi-coloured lights and fake foam snow, which Woo said was designed to raise awareness of the impact of human activities on the environment.

“We really want to bring something that is memorable for our customers,” she said, adding that the mall has recorded a more than 10 percent increase in customer visits since it went on display.

The city’s immigration department estimates around 11.11 million visitors from mainland China will enter Hong Kong from the end of December to the beginning of January, an increase of 7.6 percent compared to the same period last year.

In a study by Jones Lang LaSalle conducted over the first half of the year, mainland tourists were found to spend over $1,100 each on average, 39 percent more than visitors from other countries.