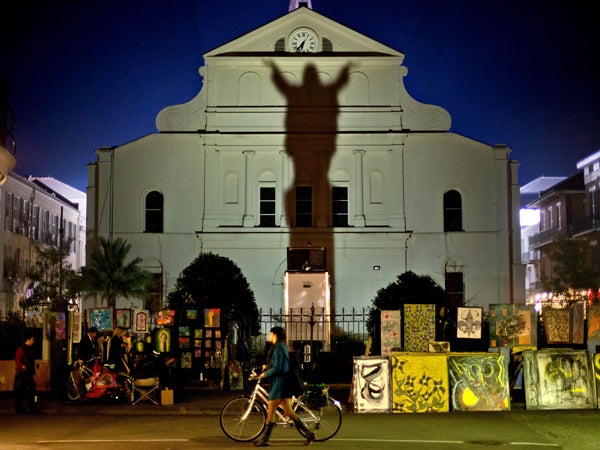 The race of Jesus: Unknown, yet powerful

For two thousand years, he has been worshipped and adored. And yet nobody really knows the face of Jesus.

So when this Christmas season brought a torrent of debate over whether Jesus was a white man, it struck a nerve.

“That statement carries a whole lot of baggage,” said Rockwell Dillaman, pastor of Allegheny Center Alliance Church in Pittsburgh. “Political baggage, spiritual baggage, emotional baggage especially in a culture like ours where the relations of white people to other ethnicities have often been marked by injustice and distrust.”

Why should we even care what Jesus looked like? If his message is God and love, isn’t his race irrelevant? Some say God wanted it that way, since there are no references to Jesus’ earthly appearance in the Bible.

Jesus can be safely categorized as a Jew, born about 2,000 years ago in the Middle East in what is now Palestinian territory. Therefore, many scholars believe that Jesus must have looked “Arab.”

“Today, in our categories, we would probably think of him as a person of color,” said Doug Jacobsen, a professor of church history and theology at Messiah College.

That view was contested by Fox News host Megyn Kelly while critiquing a Slate.com column titled “Santa Claus Should Not Be a White Man Anymore.”

“Jesus was a white man, too,” Kelly said.

Her statement drew responses from impassioned rebukes to scholarly rebuttals.

Wrote Jonathan Merritt in The Atlantic: “If he were taking the red-eye flight from San Francisco to New York today, Jesus might be profiled for additional security screening.”

If this is so obvious, though, why does a Google image search for “Jesus” reveal countless pictures of a European man with straight hair, fair skin and, often, blue eyes?

The first pictures of Jesus appeared several hundred years after his death, said Edward Blum, co-author of “The Color of Christ: The Son of God and the Saga of Race in America.” Some depicted him in animal form, as a lion or a lamb.

Blum said that from about 700 to 1500 A.D., various Jesus images proliferated throughout Europe, the Middle East and northern Africa — including black Jesus pictures.

Dillaman, the pastor, has a book that offers Bible images from different world cultures — a last supper where everyone is Thai; images of Jesus as Chinese or African.

“All these ethnicities are trying to capture Jesus in their own skin, if you will,” he said.

By the 1500s, Blum said, 90 percent of Christians were European. As Europe colonized the globe, they took white Jesus with them. In America, white Jesus images started to become widespread in the early 1800s.

There also is a desire to fit Jesus into modern racial classifications. In America today, this logic goes, Jews are white. Jesus was a Jew, so Jesus must be white.

Yet Jews did not originate in Europe, and for centuries were considered to belong to a non-white race of their own. Only recently have they been moved into America’s “white” column, along with Irish and Italians.

For Carol Swain, a scholar of race at Vanderbilt University and a “Bible-believing follower of Jesus Christ,” the whole debate is totally irrelevant.

“Whether he’s white, black, Hispanic, whatever you want to call him, what’s important is that people find meaning in his life,” Swain said.