F. Sionil José: ‘The most important thing in fiction or on the stage is how to create tension’ | Inquirer Lifestyle ❮ ❯ 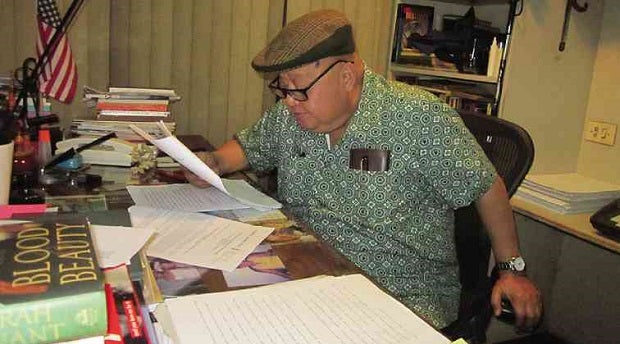 THE NATIONAL Artist for Literature at work. “Art is universal, but it starts from the particular, the national,” he says.

F. Sionil José: ‘The most important thing in fiction or on the stage is how to create tension’

The Rosales saga is a five-novel opus by National Artist for Literature F. Sionil José that begins with the suicide of the patriarch Tony Samson in “The Pretenders” and ends with the killing of his illegitimate son, Pepe Samson, in the play “Balikbayan.”

Although a lover of the stage, José, 89, a prolific novelist still active in what he calls his “craft and sullen art,” has written only two plays, short ones at that: “Muse,” a one-act play, and “Balikbayan” (Homecoming), a play in two acts—“The Passing of Pepe Samson” and “Dong-Ao,” an Ilocano ritual for the dead.

“Dong-Ao,” translated into Tagalog by Rody Vera and directed by Chris Millado, was staged by the Cultural Center of the Philippines in 2008 with an all-star cast headed by Tommy Abuel, Bembol Roco, Nanding Josef and Gigi Escalante.

Many cried during the somber ending of the play, José recalls. And he himself shed a few tears. “Dong-Ao” was later translated into Visayan and performed in Tagbilaran City, Bohol.

Two short stories and three novels by the National Artist have since been adapted for the stage. The novels are “Tree,” “The Pretenders” and “Mass” (produced by Tanghalang Pilipino with Yul Servo as the rogue-turned-rebel).

And the short stories-turned plays are “The God Stealer” and “Progress.” The first was adapted by Victor José Torres, and the second by students of the Philippine High School for the Arts in Mt. Makiling, Laguna.

The playwright gave both productions a thumbs-up.

Playwright Vera and director Millado have since had a kind of patent on adapting José novels for the stage. The first was “Tree,” mounted years ago by the Philippine Educational Theater Association (Peta).

“I was in San Francisco when sabi nila they were going to stage it. Sabi ko I haven’t seen the script! Galit ako talaga (I was really angry). I warned them, ‘Don’t do anything or else I’ll sue you!’” José recounts.

So the multi-awarded and multi-translated author huffed and puffed his way back to the Philippines, and was presented with a dress rehearsal of the play. And boy, did he change his mind.

“I was so impressed talaga. I told them you can do anything (with it), because this Rody Vera is a genius.”

“Tree” dramatized the story of Pepe Samson, his growing-up years and relationships with his father, friends and the poor tenants who work for his family, and his pangs of conscience because he cannot do anything about the injustices around him.

“As part of the Rosales saga, all connected ’yan,” says José. “Like I said, if you have a very imaginative dramatist, you can make the material come alive on the stage. Once a writer adapts a novel for the screen or for the stage, it becomes a new creation. In a sense, it belongs almost entirely to the playwright.”

Not all playwrights, however, merit his approval. José, whose outspoken views often unsettle the uninitiated (and sometimes even the initiated), opines that “many of our playwrights are not storytellers. They do not know how to tell a story. That’s the same thing with our scriptwriters.”

He cites an award-winning play which was dramatized in a literary gathering, about a couple caught in rising floodwaters.

“Their life hangs in the balance,” he notes. “So what are they talking about? Their relationships … you don’t talk about those things in that kind of situation. Nawawala na kaagad (no) sense of reality. These are small incidents which nullify whatever is presented in the play because of the lack of reality.”

“Tension is the word,” declares José. “The most important thing in fiction or on the stage is how to create tension, so that the person watching it will want to know how it is resolved. That is the basic function of a narrative, play or screenplay or whatever.”

He adds: “I learned that early in life, very early in life, when I was 10 years old and read ‘Don Quixote de la Mancha.’ It’s episodic, telenovela. What is this old man going to do next? That is how you create tension. Take history. Everybody knows the story of Rizal. You do not change history, but you embellish, you select the most interesting aspects (of his life) to create tension … If you don’t know how to tell a story, huwag ka nang mag-writer (don’t bother being a writer).”

On the other hand, he points out, “when a novel or a short story is transformed into a play, iba na, it’s a new piece of work. It’s basically the playwright’s, ginamit lang niya yung (he just used the) material. The playwright has the capacity to select the most dramatic incidents in the story.”

How does he find Philippine theater in general?

“It’s the most active (medium),” he declares. “Far more active than the movies, because we have a stage tradition—the moro-moro, sarswela, the opera, though they’re Western. That’s another thing most people do not realize, because we were Christianized.”

However, the novelist concludes, “what is important for our artists is to draw from indigenous sources to give our art a Filipino character, whether it be music, literature, the stage. These are things I have tried to do, which Nick Joaquin tried to do. When you do that, your art has a nationality. Makikilala kaagad (it will be known immediately). That is our contribution to humanity itself. Art is universal, but it starts from the particular, the national.”