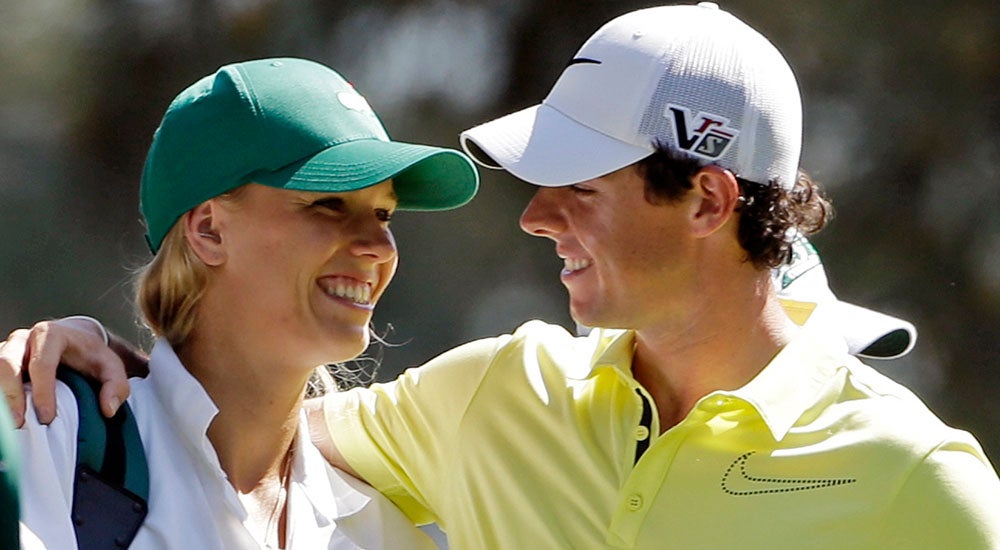 In this April 10, 2013, file photo, Rory McIlroy, of Northern Ireland, hugs his caddie, tennis player Caroline Wozniacki, during the par-3 competition before the Masters golf tournament in Augusta, Ga. One of the top power couples in sports announced their engagement on Twitter. A spokesman for McIlroy confirmed that he popped the question in Sydney, where Wozniacki is starting to prepare for the Australian Open in Melbourne. McIlroy tweeted, "Happy New Year everyone! I have a feeling it's going to be a great year!! My first victory of 2014." He added a hash tag, "She said yes!!" AP

McIlroy, the 24-year-old former world number one from Northern Ireland, posted pictures of himself and Wozniacki and a diamond ring on a woman’s left ring finger.

“Happy New Year everyone! I have a feeling it’s going to be a great year!! My first victory of 2014 #shesaidyes!!”

On her Twitter page, Wozniacki posted the same pictures with the caption “Happy New Year everyone! Rory and I started 2014 with a bang! … I said YES!!!!”

Wozniacki, 23, withdrew from a WTA event in Brisbane last weekend due to a shoulder injury but the Dane was looking forward to playing at Sydney in a tuneup event for the Australian Open.

McIlroy captured his first major title at the 2011 US Open and added another at the 2012 PGA Championship.

Wozniacki still seeks her first Grand Slam title, her deepest run in a major event being to the 2009 US Open final.

The romance has endured through a whirlwind year with rumors they were engaged a year ago, then speculation they had broken up in 2013.

And both players struggled through a difficult 2013 season.

McIlroy endured a winless US PGA season, his best showing a runner-up effort at the Texas Open last April just ahead of the Masters. His best major showing was a share of eighth in defending the PGA Championship title.

The frustrating campaign brought critics, who questioned McIlroy’s decision to switch to new equipment in 2013. Some even questioned if he still had the passion for the sport.

But McIlroy, now sixth in the world rankings, ended a win drought of more than 12 months at the Australian Open a month ago and said in early December that he was pleased with how many times he had put himself in contention in a troubled season.

“Did I need the win? Probably not,” McIlroy said. “Was it nice to get the win? Of course. But I felt like I saw enough good golf in there to know that it was very close, and it wasn’t going to be long before I did win.

Wozniacki has slid to 10th in the WTA world rankings, taking her only title of 2013 with a victory in the last week of the regular season at Luxenbourg. Her only other 2013 final was at Indian Wells, where she lost to Maria Sharapova.
She reached the fourth round at the 2013 Australian Open and the third round at the US Open but was ousted in her second match at the French Open and Wimbledon.

In the last days of 2012, Wozniacki appeared at the WTA event in Brisbane with a large ring on her left ring finger, sparking a flurry of engagement rumors.

Last February at Kuala Lumpur before the Malaysian Open, Wozniacki said that engagement was a question for McIlroy to answer but added, “I enjoy everything that’s happening right now and how things are. Marriage? We’re still young and we have many years in front of us.”

But by October, with both mired in slumps as sports competitors, there was talk of a romantic split.

That talk faded after Wozniacki won at Luxembourg to end her own win drought of more than a year, with McIlroy tweeting his congratulations saying “#21 #luxembourg #mygirl @CaroWozniacki” and Wozniacki using a picture of the couple on her Twitter profile.

Competition figures to pull the couple apart in January with Wozniacki bound for the Australian Open in Melbourne and McIlroy planning to play at Abu Dhabi and Dubai in late January.