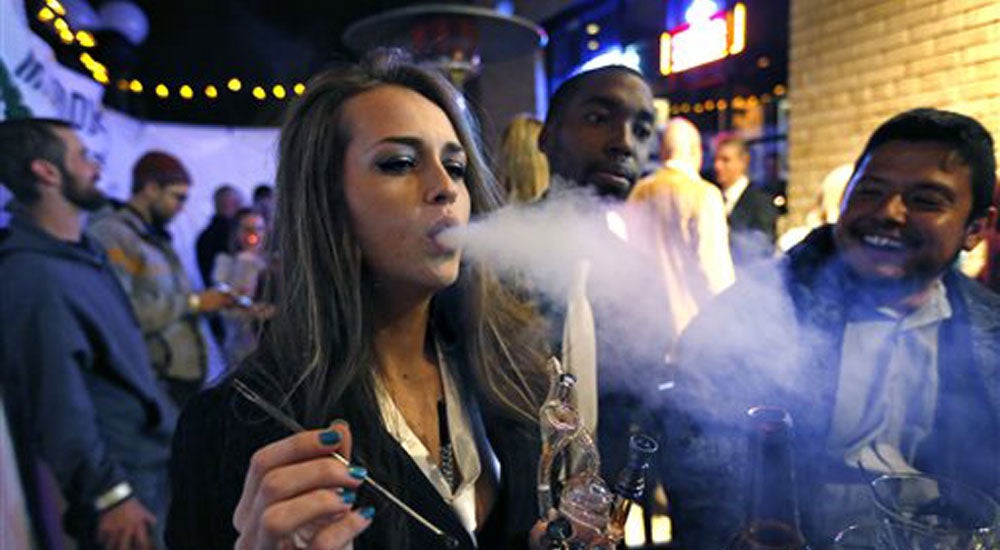 Partygoers smoke marijuana during a Prohibition-era themed New Year's Eve party celebrating the start of retail pot sales, at a bar in Denver, late Tuesday Dec. 31, 2013. Colorado is to begin marijuana retail sales on Jan. 1, a day some are calling ‘Green Wednesday.' AP

DENVER — The first recreational marijuana industry in the U.S. opened in Colorado, kicking off an experiment that will be watched closely around the world.

Activists hope to prove that legalization is a better alternative than the costly American-led war on drugs.

“Honestly, I thought I’d never see the day,” said a giddy Errin Reaume, who shared hits of concentrated marijuana at a 1920s-themed “Prohibition Is Over” party in Denver.

Skeptics worry the industry will make the drug more widely available to teens, even though legal sales are limited to adults over 21.

Colorado voters in 2012 approved the legal pot industry that opened on Wednesday. Washington state has its own version, which is scheduled to open in mid-2014. Uruguay passed a law in December to become the first nation to regulate pot.

Pot advocates have argued a legal market would generate revenue for states and save money by not having to lock up so many drug offenders.

“I’m going to frame the receipt when I go home, to remind myself of what might be possible. Legal everywhere,” James Aaron Ramsey said, who served a brief jail sentence for pot possession less than a year ago and was excited to legally buy weed.

Tinted windows on a black limousine idling outside a dispensary showed another side of the newly legal market — people eager to try legal marijuana but not ready to be seen publicly buying it.

Addison Morris, owner of Rocky Mountain Mile High Tours, had 10 clients waiting inside who paid $295 for three hours of chauffeuring by a “marijuana concierge” who would help them choose strains and edible pot products.

“We’re your grandmother’s pot connection,” the 63-year-old said. “We’re not the hippie stoners who are going to stand in this cold and party.”

Colorado set up an elaborate plant-tracking system to try to keep the drug away from the black market, and regulators set up packaging, labeling and testing requirements, along with potency limits for edible pot.

Pot is still illegal under federal law, but the U.S. Justice Department outlined an eight-point slate of priorities for pot regulation, requiring states to keep the drug away from minors, criminal cartels, federal property and other states in order to avoid a federal crackdown.

“We understand that Colorado is under a microscope,” Jack Finlaw, lawyer to Gov. John Hickenlooper and overseer of a major task force to chart new pot laws, recently told reporters.

A group of addiction counselors and physicians said they’re seeing more marijuana addiction problems, especially in youths, and that wider pot availability will exacerbate the problem.

“This is just throwing gas on the fire,” said Ben Cort of the Colorado Center for Dependency, Addiction & Rehabilitation at the University of Colorado Hospital.

Marijuana activists were hoping Colorado’s experiment wouldn’t be that noticeable after an initial rush of shopping.

“Adults have been buying marijuana around this country for years,” said Mason Tvert, spokesman for the Marijuana Policy Project. “The only difference is that in Colorado they will now buy it from legitimate businesses instead of the underground market.”